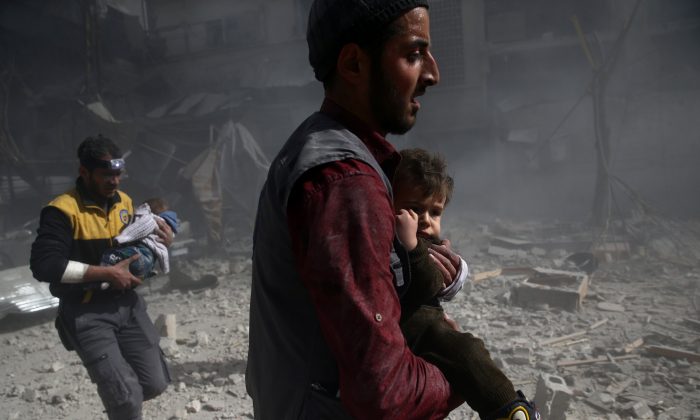 A man holds a child after an airstrike in the besieged town of Douma in eastern Ghouta in Damascus, Syria, Feb. 7, 2018. (Reuters/ Bassam Khabieh)
Middle East

Assad’s Syrian government has repeatedly said it only targets terrorists.

It was the third day of intensified, unprovoked bombings on the region. On Monday, at least 28 people were killed, and on Sunday, a suspected chlorine attack left dozens of people suffering from breathing difficulties, reported The Associated Press.

The area, held by rebel groups the insurgent Islam Army and moderate rebel group Failaq al-Rahman, been under attack since the end of December as the government of President Bashar Assad struggles to bring it under control. Mortars have been launched by besieged groups into Damascus, also killing civilians.

Wednesday’s attack raises the number of people killed in the area since Jan. 29 to 384, including 94 children, reported AP.

The United Nations called on Tuesday for an immediate humanitarian ceasefire in Syria of at least a month.

U.N. representatives noted that Eastern Ghouta, the last major rebel bastion near Damascus after almost seven years of war, had not received inter-agency aid since November.

The Assad regime’s army and its allies have besieged Eastern Ghouta, a pocket of satellite towns and farms under the control of rebel factions, since 2013.