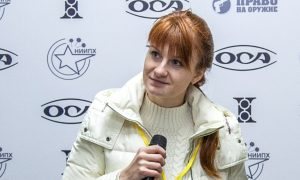 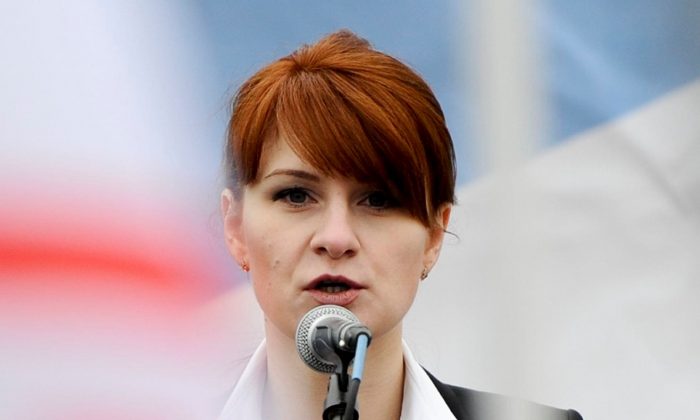 In this photo taken on April 21, 2013, Maria Butina, leader of a pro-gun organization in Russia, speaks to a crowd during a rally in support of legalizing the possession of handguns in Moscow, Russia. (AP Photo)
Europe

MOSCOW—In her first public appearance since being deported by U.S. authorities who had jailed her for being a Russian agent, Maria Butina was offered a job by Moscow to defend Russians imprisoned abroad.

During a Nov. 18 event for the media, Russia’s human rights commissioner, Tatyana Moskalkova, offered Butina, 31, a job working for her commission.

“I invite you to work in our group defending compatriots abroad. I’m sure together we’ll be able to do a lot of good for people who’ve ended up in tough situations abroad,” Moskalkova said.

Butina, who flew back to Russia on Oct. 26 after being deported, didn’t say whether she would accept the offer, which was made at what she called her first public appearance since she was mobbed by wellwishers in front of the media at the airport on her arrival home.

Butina pleaded guilty in December of 2018 to one count of conspiring to act as a foreign agent for Russia by infiltrating a gun-rights group and influencing U.S. conservative activists and Republicans, a conviction slammed as ridiculous by Moscow.

The case put a strain on relations that were already under pressure from an array of issues including U.S. allegations of Russian election meddling and Russia’s annexation of Crimea. Moscow denies any interference in U.S. elections.

Moskalkova invited Butina to help her commission defend the rights of Russians abroad such as Konstantin Yaroshenko, a pilot serving 20 years in the United States for conspiracy to smuggle cocaine into the country.

Moskalkova said she also knew that Butina had been offered a job in the State Duma, the Russian lower house of parliament, and urged her to accept that one too.

The case of Yaroshenko, who was arrested by U.S. special forces in Liberia in 2010, and others like it have prompted Russia to accuse the United States of hunting its citizens across the world.

The United States has accused the Russians in question of specific crimes and sought their extradition and arrest with regard to those crimes.

Russia said last week it had lodged a formal diplomatic protest after Israel extradited a Russian man to the United States where he faces a slew of serious cybercrime charges.