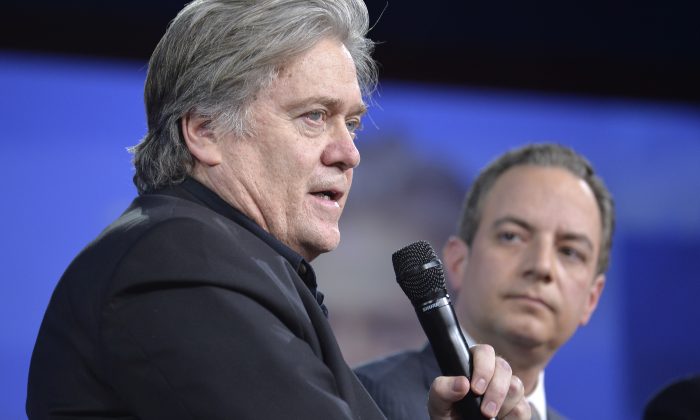 Speaking at the Conservative Political Action Conference (CPAC), White House Chief of Staff Reince Priebus and Chief Strategist Steve Bannon said President Donald Trump is executing his plans as promised during the election campaign, while mainstream media organizations are still getting it wrong.

In the rare joint appearance by the two top White House staff members, they said the President and his administration are focused every day on delivering on the promises he made.

Since his inauguration on Jan. 20, Trump has signed 24 executive orders and memorandums, ranging from national security to deregulation and policies intended to foster economic growth.

Part of the Trump administration’s focus is what Bannon described as the “deconstruction of the administrative state.”

Bannon said the United State’s withdrawal from the Trans-Pacific Partnership (TPP) was one of the clearest examples of this. The administration will instead focus on tailored bilateral trade-agreements.

Both Trump and Bannon have spoken of what they consider the importance of the nation-state. Speaking at a rally in Melbourne, Florida, on Feb. 18, Trump said: “The nation-state remains the best model for human happiness, and the American nation remains the greatest symbol of liberty, of freedom, and justice.”

Speaking at CPAC, Bannon said a nation’s culture and economy give it a reason for being and is “what unites us.”

Both Priebus and Bannon say that major media outlets having been getting Trump’s presidency wrong—something that Priebus said didn’t just start since the inauguration, but has been evident throughout the election season.

But while Priebus said he has “hope that it will change,” Bannon is not expecting a change in how the presidency is reported on, and said that instead of getting better, it will get worse.

“If you think they will give you their country back without a fight, you’re wrong.”

“We have to stick together as a team,” Priebus said.

According to Bannon, a “new political order” is being formed.

“We want you to have our back,” Bannon said, while at the same time calling on those within the conservative movement to “hold us accountable to what we promised we would deliver.”