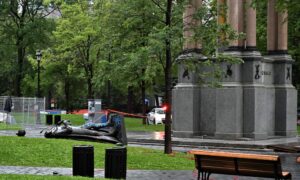 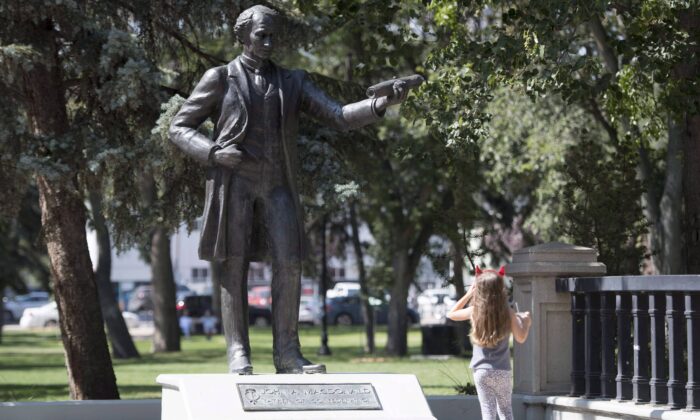 A little girl stops to look at a statue of John A. Macdonald in Victoria Park in Regina, Canada, on Aug. 22, 2018. (Jonathan Hayward/The Canadian Press)
Canada

The Regina City Council has decided to remove the statue of Canada’s first prime minister from a park and put it in storage until a new location is found.

In a 7-4 vote Wednesday, councilors voted in favour of removing the statue of Sir John A. Macdonald from the city’s Victoria Park and put it in storage, coming after calls for its removal because of the former prime minister’s role in establishing colonial systems which include Indian residential schools.

The council spent nearly four hours hearing from people for and against the removal before the vote.

In recent years, monuments of Macdonald throughout the country have been subjected to attacks and vandalism, which members of parliament have condemned.

John Hopkins, chairman of Reconciliation Regina, told the council that the statue is offensive to many people, both indigenous and non-indigenous.

Some people suggested placing the statue in a museum, moving it behind the provincial legislature or to the RCMP Heritage Centre.

Regina resident Trevor Lakness, who opposed the removal of Macdonald’s statue, said he does not have faith the city will put the statue in another location, citing the example of Metis leader Louis Riel, whose statue has been kept in storage for many years.

Conservative Sen. Denise Batters, in a letter addressed to Mayor Sandra Masters and members of Regina City Council on March 29, urged them to ensure Macdonald’s statue stays in place, arguing it’s “an enduring symbol of the promise offered by Confederation.”

“Without Macdonald’s pragmatism, skill, and determination, Canada would likely never have coalesced into one great and strong nation,” Batters wrote.

“Of course, our nation’s leaders and heroes are not without flaws, and Macdonald is no exception.”

She added that leaders are the product of their time, and so this allows one to examine the legacy of Macdonald with hindsight by looking at the consequences of the decisions or policies he made.

“But we cannot supplant his historical context—his values, his judgments—with those prevalent in our own modern time,” she wrote. “We cannot—We must not—erase our history. But we should add to it, and we should give it full context.”

The statement, signed by historians, policy experts, and thought leaders urged governments, historians, teachers, media, and others to ensure Canadians have “access to a balanced view of our common past and the people who made us.”

The joint statement highlights Macdonald’s many accomplishments. For example, he led the original Confederation effort and united the scattered colonies of British North America into Canada; dissuaded aggressive American expansionism; acquired territory that made Canada the second-largest country in the world; and persuaded Manitoba, British Columbia, and Prince Edward Island to join the Confederation.

Other achievements, according to the statement, include spearheading the building of the Canadian Pacific Railway; promoting freedom of expression and the press; and championing unity between French-Catholic-dominated Canada East (Quebec) and English-Protestant Canada West (Ontario).

One of Macdonald’s failures was the establishment of the national policy on Indian Residential Schools, the signatories said. The policy mandated that every indigenous child be indoctrinated into the Euro-Canadian and Christian way of living and assimilated into mainstream Canadian society.

“Even though widely supported at the time, the schools had a dark legacy that hangs over the country to this day,” the statement says, adding that Macdonald made “many other mistakes” with respect to indigenous peoples and policies that “Canadians today strongly disapprove.”

But the signatories argued that Macdonald’s failures must be weighed against his contributions to the nation, and documented concern for and friendship with the indigenous people of Canada.

A public consultation process is to take place to determine what the next steps will be.