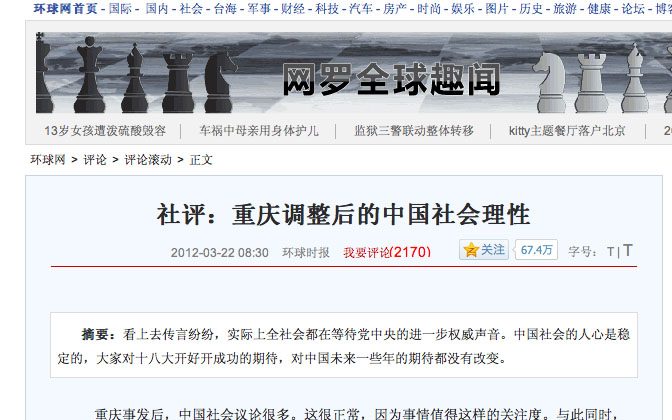 The Global Times published an editorial Thursday calling for clarity from the regime's central authorities after rumours of a coup attempt erupted Tuesday. (Internet screenshot)
China

The Global Times, one of the Chinese regime’s official mouthpieces, published an editorial Thursday asking the central authorities for clear direction on how to deal with rumors of an attempted coup.

The editorial refers to rumors surrounding the Chongqing incident. Chongqing has become ground zero for high-level infighting within the Chinese Communist Party (CCP). Former Chongqing mayor Bo Xilai and his ally Zhou Yongkang, who sits on the CCP’s Standing Committee as head of the police, are key figures rumored to be behind a recent coup attempt.

The anonymous editorial calls on the party’s highest authorities to clarify the situation. Though often indirect, it discusses ongoing rumors swirling the incident and reveals confusion about who is now in charge of the country.

The article repeatedly emphasizes the importance of following the dictates of the CCP central committee, while saying it is natural for people to discuss the controversy.

It also hints at anxiety and uncertainty within the party apparatus about the current status of the party’s leadership.

“On the surface, it seems that rumors are everywhere; as a matter of fact, the entire society is waiting to hear the authoritative voice from Chinese communist Party Central Committee (CCPCC). In our society, people’s hearts are stable; our expectation for a successful 18th National Congress, for the near future of China, has not changed,” reads the commentary.

“We believe the CCPCC has accelerated its work in response to the political concerns of the public. We hope they can come to a conclusion faster. The faster that we hear an authoritative voice, the clearer the society can be, and the public will feel more assured.”

The article does not appear in the English version of the Global Times and has been republished on other websites widely.

The Epoch Times predicted Bo Xilai’s fall back on Feb. 18. You might be interested in this op-ed piece from Mar. 19:

Why Zhou Yongkang is Doomed to Follow Bo Xilai

Expect Zhou to be fired from his posts as the struggle inside the CCP continues. Although a member of the Politburo Standing Committee, Zhou is facing trouble and is likely to suffer the same fate as Bo Xilai, columnist Zhang Tianliang argues.