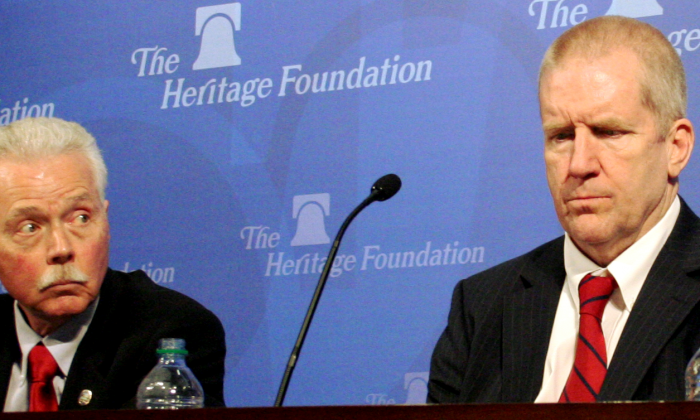 WASHINGTON—A couple of frustrated circuit judges—one from South Dakota and the other from Hawaii—wanted to find a better way for changing the behavior of alcohol and drug abusers whom they saw repeatedly in their courtrooms. Both had been career prosecutors before becoming judges. They independently created programs with a similar philosophy for improving probationer behavior.

The two judges spoke as founders of these programs on Aug. 21 at the Heritage Foundation in Washington, D.C.

As an alternative to imprisonment, placing offenders under probation supervision has not worked out well. Too often the offender violates the conditions of probation, and nothing happens as a consequence.

In theory, putting a defendant on probation instead of sending him or her straight to prison gives the defendant an opportunity to rehabilitate. Defendants who do not behave well would be sent to prison to finish their sentence or given a new sentence based on the initial crime. But in practice, for those arrested repeatedly, too often the offender’s behavior in the use of drugs or alcohol doesn’t change. If and when probation will be revoked is far from certain.

Revoking probation status by holding a probation revocation hearing is traditionally a slow process, and can be a very inefficient and ineffective way to address the problem. It’s highly likely that a probation officer will seek revocation only after the probationer has committed numerous offenses. Many probationers wind up in prison or abscond, and relatively few make progress in overcoming their addiction.

Steven S. Alm, a circuit judge, Honolulu, Hawaii, and Founder of Hawaii’s Opportunity Probation with Enforcement (HOPE) said that an offender will keep using drugs or alcohol when nothing happens as a consequence for a year or two. The probation officer then has the unappealing choice of talking to the violators or writing up the violations and sending them back to court for the judge to give them 5 or 10 years in prison.

“We have good POs [probation officers], we have caring judges, but it’s the system itself that is broken,” he said. He came to that conclusion in June 2004, when he was reviewing the felony trial calendar and saw the many motions to revoke probation.

Judge Alm thought what might work better is something similar to how he handles misbehavior in his own family. “Something happens immediately. It doesn’t have to be severe but it has to be swift and it has to be certain.”

Alm said they started the program in 2004 with 34 cases of methamphetamine users. He asked the probation officers to refer their toughest cases, and that he didn’t want to exclude anyone. He was ready then to institute his policy of the offender going to jail every time there was a violation.

“You don’t show up for a drug test, I’m going to issue a warrant. Then when you get arrested, you are given 30 days in jail. If you show up and admit to [using drugs], you get a few days.” He also said later that if you show up and deny using drugs, and they have to send the results to a laboratory, he gives 15 days jail time.

“HOPE probation is swift, certain, consistent and proportionate,” he said.

Larry Long, a circuit judge of the second judicial circuit in South Dakota, initiated the 24/7 Sobriety Program in January 2005 when he was the South Dakota Attorney General.

“The goal is to keep the defendant sober 24 hours a day, seven days a week,” said Judge Long.

Most program participants must submit to a breath test twice a day in the presence of law enforcement.

A modification of the testing was needed to accommodate offenders in rural South Dakota, who may have to travel 30 miles to a sheriff’s office or 60 miles twice a day, Long said. The small proportion who live too far for twice daily testing use an electronic ankle bracelet, which monitors continuously for alcohol consumption.

Long said the program needed to be enhanced when it discovered that offenders were switching drugs, from alcohol to some illicit drug. The drug patch and random urine testing were added to the program.

If the offender doesn’t show up for testing or fails it, he or she immediately goes to jail. Long said the next day, he or she is released and “put back in the system and starts over.” Long said it was designed to operate like an electric fence. He asked the audience how many who have touched an electric fence have touched it a second time. “It’s not more complicated than that,” he said.

Both programs have had a high degree of success in reducing substance use, criminal recidivism, and incarceration.

Long’s 24/7 Sobriety Program’s twice daily testing has administered 7.1 million tests to 34,207 participants from February 2005 to August 2014. The passing rate has been 99.2 percent. The much less frequent urinalysis and drug patch tests had passing rates of 96 and 82 percent, respectively.

In 2007, the S.D. legislature made the 24/7 Sobriety Program available to all crimes, not just drunk driving. It is used as a condition for pre-trial release and suspended sentences, as well as by parole boards, as a condition for discharging prisoners from the penitentiary.

An amazing finding from these programs is that “most people can stop using drugs without going to treatment,” said Alm. Long’s sobriety program for alcohol discovered the same thing in South Dakota, Alm said.

Their programs have caught on elsewhere in the country. Judge Alm said that 18 states and about 60 courtrooms were using some version of HOPE. Washington State put its entire at-risk population on it—17,000 parolees and probationers, he said.

Judge Alm acknowledged that the HOPE program won’t work for the most incorrigible offenders. He said, “25 or 30 percent should be sent to prison at sentencing. But that means 70 percent should be supervised by the community. And if you do that right, you can save taxpayers, you can help offenders and their families avoid going to prison, and you can reduce crimes.”

Long made a case that the 24/7 program has reduced traffic deaths in South Dakota. He showed a graph of the number killed by year from 2000 to 2013. For the five years prior to the 24/7 program, the average yearly number of deaths was 83. For the nine years that the program has been running, 2005-2013, the average number has fallen to 55.3 deaths. While it’s true that more attention to seatbelts and safer cars have probably impacted this number, Long said he is confident that the program of testing 2,200 daily for alcohol consumption was a major factor in saving lives.