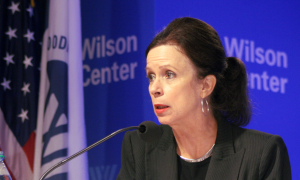 Should the US Believe in Iran and Rouhani’s ‘Charm Offensive’?
0
Share Now
TelegramFacebookTweetEmailTellMeWeReddit
Copy Link 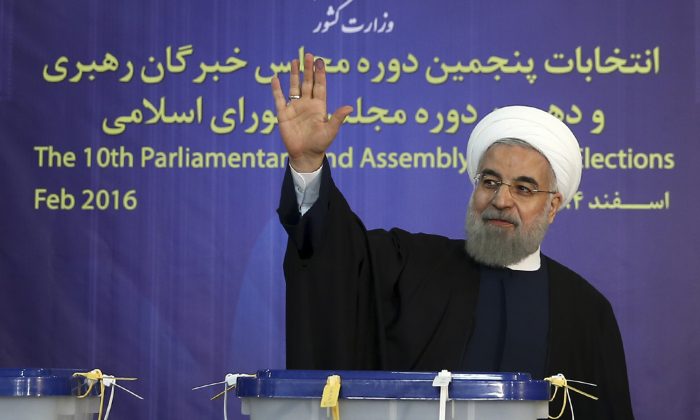 WASHINGTON—Soon after the Feb. 26 Iranian elections, a plethora of commentaries immediately followed that attempted to interpret the results. The victory of reformers and moderates was stunning, but what difference will it make in bringing about reforms, including democracy and human rights in Iran? The reformers and moderates may have more influence in Iran’s parliament, or Majlis, but the supreme leader, security, judiciary, intelligence services, and the military remain in the hands of the hard-liners.

In addition to electing members of parliament, voters elected the 88 members of the Council of Experts (also known as Assembly of Experts) that appoints the supreme leader. The current supreme leader, 76-year-old Ayatollah Ali Khamenei, is in ill health. If he were to die or become incapacitated, the newly elected moderates could have considerable influence on choosing his successor.

Iran is a country with a unique form of government. Established by the Islamic Revolution of 1979, the government is headed by an unelected supreme leader, chosen by the assembly, although experts say that more likely, the assembly rubber-stamps a backroom deal. So, at the highest levels, Iran is an oligarchy. However, the country has democratic institutions too. Iran’s Majlis can reflect the popular will.

But there was nothing democratic about the way the candidates were nominated. Nearly 12,000 applied to be candidates for parliament and nearly half were disqualified by the unelected, ultraconservative 12-member Guardian Council. How many of those rejected were reformers is hard to know, say observers, and after vocal protests, many hundreds were reinstated. NPR reported that only 200 reformists were approved to stand for election, citing AP.

Although the vetting process is undemocratic, the same cannot be said of the election. The nominating process has undemocratic procedures, conceded Mohsen Milani, “but once you pass that stage, there’s considerable competition, and what happens after that competition usually changes the landscape of Iran in a way that perhaps a lot of elections in democracies do not.”

Milani, who is executive director of the Center for Strategic & Diplomatic Studies, was speaking at the Wilson Center on March 3. He said that the information he had was that 6,200 competed for 290 parliament seats, which are 4-year terms. At 78 percent, the percentage disqualified to run for the 88-member Council of Elders, which has 8-year terms, was higher than the 60 percent disqualified to run for parliament.

Milani and other Iranian observers say that despite the authoritarian nature of the government and the disqualification of hundreds of applicants, one should not make the mistake of dismissing this election as inconsequential.

Robin Wright, a joint fellow at the U.S. Institute of Peace and the Woodrow Wilson International Center for Scholars, summarized the election outcome.

“[The voters rejected] big-name hard-liners who had blocked reforms at home and tried to stymie the nuclear deal with the outside world. The result is a wave of new faces in Iranian politics; only about a third of the winners are incumbents in parliament. The number of women almost doubled, and younger candidates also won more seats. The largest bloc will be made up of centrists, moderate conservatives, and independents, with a few real reformists (who often won the highest vote counts).”

[The voters rejected] big-name hard-liners who had blocked reforms at home and tried to stymie the nuclear deal with the outside world.
— Robin Wright, joint fellow, U.S. Institute of Peace and the Woodrow Wilson International Center for Scholars

Media reports interpret the results to mean that moderates, including those who supported the nuclear deal that hard-liners still oppose, have taken over the political center. The hard-liners had been in control of parliament since 2004.

It’s very hard to give exact counts because the labels—”reformer,” “moderate,” “pragmatic reformist,” “conservative,” “hard-liner,” and “principalist”—are not formal political parties. Various news media give different counts but the trend is always the same, said Max Fisher, who writes for Vox, a news website. One caveat is that some 60 seats have to go through another round of elections, said Milani. But the best guess is that the two-thirds majority control that the hard-liners enjoyed since 2004 has been reduced to about one-third, wrote Fisher, citing AFP.

Haleh Esfandiari noted that in some cases, “moderates’ successes were due to informal alliances with moderate conservatives.”

Omri Ceren, who writes a pro-Israel blog, provides several instances of officials elected who were on Reformist lists. He cites Kazem Jalali, whom he says is a prominent member of the Iranian parliament and on the Reformist list in Tehran. Ceren writes that Jalali has demanded “the harshest punishment” for reformist leaders Mir-Hossein Mousavi and Mehdi Karroubi. Mousavi and Karroubi were reformist candidates in the disputed 2009 presidential election, and are currently under house arrest. “Harshest punishment,” of course, means death. That certainly doesn’t sound like a moderate!

Ceren cites other examples of hard-liners who were used to fill out Reformist lists. Time will only tell the extent to which the country truly moved ideologically toward a more moderate position, but there can be no doubt that the moderates made substantial gains.

The moderates and reformers did best in the urban areas. A coalition of reformers recommended what was called the “List of Hope,” and in Tehran, all 30 parliamentary seats went to the reformers. All the hard-line incumbents lost.

“Even the leading hard-liner, a former speaker of parliament connected by politics and family to Supreme Leader Ali Khamenei, lost his seat,” wrote Wright.

Mohammad Reza Aref, from Tehran, former presidential candidate and ally of President Hassan Rouhani, received the most votes for parliament. He was at the top of the “List of Hope.”

Another top vote-getter and an ally of Rouhani, former President Hashemi Rafsanjani, is back after being “marginalized in a power struggle with the current Supreme Leader,” according to Wright. In 2011, he had been ousted as chair of the Assembly of Experts by hard-liners. Two of his children were sentenced to jail terms “on trumped-up charges,” and two other children were disqualified from running for parliament, she wrote.

In the Feb. 26 election, Rafsanjani received more votes than any other candidate for either parliament or the assembly. “His decisive victory could position him to lead the body again,” Wright opined.

Conservatives will still dominate the assembly, but several prominent hard-liners were ousted. For instance, Mohammad Taqi Mesbah-Yazdi, who had been the “spiritual mentor to former President Mahmoud Ahmadinejad,” according to Wright, and “a theologian of the hard right,” according to Haleh Esfandiari, was not re-elected.

The election was in many respects a referendum on President Rouhani’s policies of opening up to the West, securing the nuclear deal and reduction in economic sanctions, economic reforms, and more individual freedoms.

The election benefited Rouhani from the ouster of “members of parliament who had repeatedly blocked his initiatives. Some had publicly called Iranian diplomats “traitors,” or vowed to ‘bury them under cement’ for negotiating with the United States,” wrote Wright.

“It’s not clear that the [change in the composition of the parliament with more moderates] produces a dramatic change in any of Iran’s policies, particularly on the economy, because it really wasn’t the parliament holding the president back,” said Suzanne Maloney at the Wilson Center discussion.

She wrote in The Wall Street Journal, Feb. 26, that lawmakers approved his most important cabinet members and have not blocked the nuclear deal and “the rehabilitation of Iran’s economy.” She said that President Rouhani, himself aligned with the conservatives, albeit with the pragmatic wing, had established a good working relationship with conservative speaker of parliament Ali Larijani.

However, she agreed that conservatives in the past had used the economic issues, economic freedom, and policies to viciously attack and discredit the reform movement, which she said it never really recovered from. Now, with centralists dominating parliament who are generally supportive of Rouhani’s economic agenda, “it’s going to be more difficult for conservatives across the board to criticize Rouhani’s [fixes of] long-term structural issues of the Iranian economy.”

Maloney is deputy director of the Foreign Policy Program at the Brookings Institution, and is editor of Markaz, a blog on politics and policy toward the Middle East.

It’s not clear that the [change in the composition of the parliament with more moderates] produces a dramatic change in any of Iran’s policies, particularly on the economy.
— Suzanne Maloney, deputy director, Foreign Policy Program, Brookings Institution

The experts agree that Rouhani will have a freer hand, especially in the economic realm, but in some areas the election won’t help. “He can more easily advance his economic agenda, increased privatization, fewer restrictions on business, and perhaps a more inviting and secure environment for foreign investors,” wrote Esfandiari, who was ill and unable to attend the Wilson Center discussion.

Esfandiari is a public policy fellow at the Woodrow Wilson International Center for Scholars. She wrote that Rouhani will likely have a greater capacity to effect change in the social sphere, such as protecting women and youth from harassment by the morals police. But he has little or no control over state intelligence/security organizations and the Revolutionary Guards and Basij paramilitary forces.

The arrest and imprisonment of dissidents and whoever else these forces don’t like can continue with impunity, she wrote. She noted that the security agencies partner with the judiciary and the head of the judiciary is appointed by the supreme leader and is not controlled by the president. So, one should not expect change in the foreseeable future when it comes to internal security, human rights, and political freedoms.

Esfandiari was held in solitary confinement in Evin Prison in Tehran for 105 days in 2007.