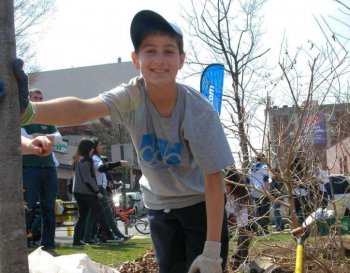 A JOB WELL DONE: Nate Newhouse, 13, stands next to a tree he helped plant, one of many new additions to MacDonald Park in Queens. (Tara MacIsaac/The Epoch Times)
US

By Tara MacIsaac
Print
NEW YORK—In September 2010 the trees of Forest Hills, Queens, took such a beating from the weather that Michael Perlman says he walked around the neighborhood where he grew up and cried.

A macroburst (a tornado-like weather system) ripped up hundreds of trees throughout the area.

“It was devastating, surreal,” recalled Perlman. He was among nearly 1,000 volunteers who planted about 200 trees to replenish Forest Hills arboreal beauty on Saturday afternoon.

The MillionTreesNYC initiative led by the New York Restoration Project (NYRP) teamed up with JetBlue Airways to bring together helping hands from all boroughs in the fourth annual One Thing That's Green tree planting bonanza.

NYRP Executive Director Amy Freitag said a larger crowd turned up than in previous years, partly because the weather on Saturday was beautiful, but also because of the devastation wrought by the macroburst in the fall. Perlman is chairman of the Rego-Forest Preservation Council, a group dedicated to preserving the cultural heritage of Forest Hills, the natural landscape included.

“That's how Forest Hills got its name—forest and hills,” said Perlman. His organization has documented the areas hardest hit by the macroburst. MacDonald Park was the worst with 50 trees destroyed. That's where the volunteers concentrated their efforts on Saturday, though they did venture out to some apartment complexes and other areas affected by the storm.

Saturday's tree-planting event will be followed up by tree giveaways.  Four Borough Neighborhood Preservation Alliance will give away 100 trees to property owners on Sunday, June 12. NYRP will give away 3,000 trees citywide this spring.

NYRP sets up in different neighborhoods with a hundred or more trees and hands them out on a first-come, first-served basis. The next giveaway will be at Greenwood Cemetery in Brooklyn on April 16 from 11 a.m. to 1 p.m.