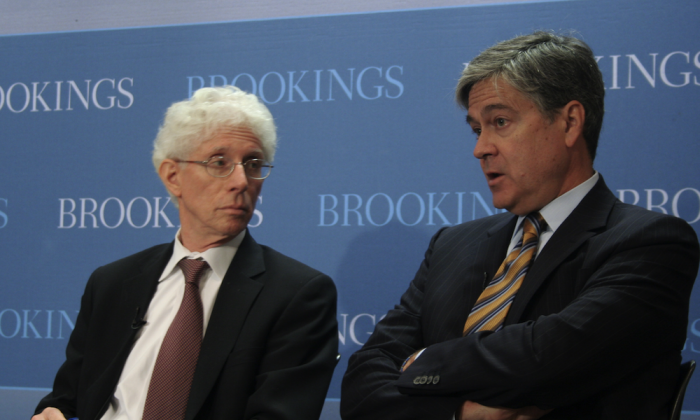 Reflections on the Obama-Romney Election Battle for the White House

WASHINGTON—Most of us were relieved when the 2012 presidential election finally ended and wanted to forget the non-stop negative ads. But for those involved in campaigns and reporting on them, the past election is not past.

What enduring impact will the 2012 election have on future elections?

The latest effort for dissecting last year’s election is a new book, ‘Collision 2012: Obama vs. Romney and the Future of Elections in America’ by Washington Post correspondent Dan Balz.
Balz contends that the Obama-Romney battle for the White House reshaped the political system in profound ways.

On September 18, Brookings Institution hosted a discussion on the historic election with Balz as guest of honor. Balz led by explaining some of his conclusions. He had co-authored, with Haynes Johnson, a best-seller book on the 2008 presidential election between Barack Obama and John McCain.

The 2012 book was “obviously a totally different book,” Balz said. The 2012 campaign was “much grittier…much more negative,” he said and described it as a “stranger campaign,” especially on the Republican side.

William Galston, an expert on political campaigns and elections and former policy advisor to President Clinton, joined Balz in the Brookings’ discussion along with John Harwood, a political writer for the New York Times and frequent commentator on CNBC, NBC, and PBS. The moderator Elaine Kamarck, senior fellow at Brookings Institution, has written often on American politics.

Kamarck commented on a finding in the book that the 2012 election was the first election where there was “extraordinary emphasis on technology and analytics.” Balz noted that the Obama campaign drew upon five and half years of experience in this regard, which gave them the upper hand in using data, analytics, modeling, and technology, and a “much superior ground game to the Romney team.”

“I think the techniques we saw will become standard practice in 2016,” Balz said.

Balz was able to have a one-on-one, 90 minute, private interview with Mitt Romney in January just after Barack Obama was sworn in for a second term. The episode of the “47 percent” came up and Balz said that Romney is still in denial about what he actually said. The 47 percent was an answer to a question given at a private fundraiser in Florida that was secretly video recorded. The transcript of the audio portion first appeared in Mother Jones.

Romney characterized 47 percent of the voters whom, he believed, would always vote for Obama.

“…who believe the government has a responsibility to care for them, who believe that they are entitled to health care, to food, to housing, to you-name-it. That that’s an entitlement. And the government should give it to them. And they will vote for this president no matter what… These are people who pay no income tax… I’ll never convince them they should take personal responsibility and care for their lives.”

He admitted to Balz that the 47 percent comment was very damaging and hurt the campaign, but he still insisted that his remarks were misinterpreted.

Romney has a similar take on his suggestion that he wanted to make conditions in America such that illegal immigrants would just “self-deport.” Balz said that Romney does not understand why offering self-deportation had come to hurt him. He told Balz that he felt it was benign, not offensive.

The panelists tried to pinpoint the forces that decided the election.

Balz said that the Obama campaign recognized that if the election were a referendum on the economy or Obama’s handling of the economy, “they would be in big trouble. So they created a message that completely ignored it.”

The Obama campaign developed the “middle class message.” They made it a choice asking which one of these two candidates, do you as a middle class voter have more confidence to take better care of you?

Though growth was tepid, the economy turned out to be just good enough to allow Obama to win, said Balz. It nearly tipped the other way.

Galston seized on the importance of the auto bailout as a decisive factor in the election. He said that much good research supports that Ohio couldn’t have been won by Obama without the auto bailout, and that he believed Obama wouldn’t have done as well in the Midwest.

Balz agreed. He said that exit polls showed that non-college white males in Ohio voted 6 percent more for the president than nationally. Another factor in Ohio was the “portraiture of Romney that closed factories and not the guy who would create jobs,” he said.

The demographics working for the Democratic candidate were frequently mentioned at the event and elsewhere. Harwood said the Republican Party was in the process of becoming a whiter, older, conservative, male party. The Democratic Party benefited from the cultural changes the country is undergoing.

It shouldn’t have been a surprise, Balz said sarcastically that the morning after the elections, the Republicans declared they had a Hispanic problem. The demographic forces have been pushing Hispanics in the Democratic Party and the problem has been persistent for the Republican Party for decades, he said.

The Romney campaign made a “fatal assumption” on white voter turnout, said Balz. They convinced themselves that white voter turnout would stay as it was in 2008 at 74 percent. They ignored the trending downward from past elections. In 2012, whites actually dropped to 72 percent of the electorate.

For the first time in this election, blacks voted at a higher rate than whites did, probably because Barack Obama was on the ballot. For some reason, perhaps because the GOP candidate was viewed unfavorably by many in his party, whites stayed home in the 2012 election. The whites who did vote favored Romney by 59 percent, however, relatively fewer of them voted in 2012.

The Associated Press commissioned a study with demographer William Frey analyzing census data and exit poll data that found had whites, blacks and other minorities voted at the same rates they did in 2004, Mitt Romney would have won narrowly.