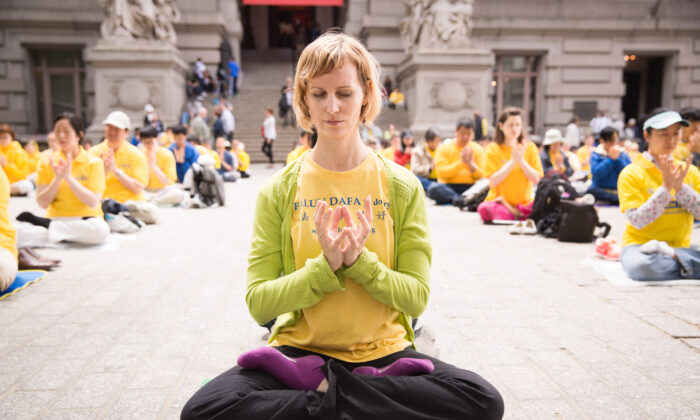 A woman who practices Falun Gong meditates with others near Battery Park in Manhattan during World Falun Dafa Day on May 13, 2015. (Laura Cooksey)
Viewpoints

What comes to mind when reading the words truth, compassion, forbearance?

Some may consider them as noble principles or even recognise them as precepts that underly orthodox religions. Others may reflect on the lack of truthfulness and compassion in our world, such as the Chinese communist regime’s censoring Chinese whistle-blowers at the outset of the pandemic and concealing the danger of COVID-19 from the world.

But what if they are not just admirable values or principles, but something that exists and impact us in this life, even if we may not realise it?

For millions in China and around the world who practice Falun Dafa, also known as Falun Gong, truth, compassion, and forbearance have a deep significance. Falun Dafa is a spiritual practice rooted in Buddhist traditions dating back thousands of years and traditionally passed down from teacher to student. On May 13, 1992, Mr. Li Hongzhi introduced Falun Dafa to the public so it could be of benefit to more people.

Falun Dafa consists of two main components: gentle exercises and meditation, and self-improvement through the study of teachings centred on truth, compassion, forbearance (Zhen 真, Shan 善, Ren 忍 in Chinese), taken as the underlying characteristic of the universe.

By 1998, the China State Sports Commission found over 70 million people across China were practising Falun Gong. Its popularity grew as people recognised its true ancient goodness and its simple message: live your life according to truthfulness, compassion, and forbearance, let go of negative attachments, and be responsible to yourself and others.

Today, Falun Dafa is practiced in over 90 countries, and Mr. Li’s teachings have been translated into over 40 languages.

Our Connections to The Universe

Traditional Chinese wisdom refers to the harmony of heaven and earth and that the universe is itself inherently good, and as particles of the universe, human beings also carry this “goodness” within.

Today, science explains that particles existing in the human body trace their origins back billions of years to, and right after the Big Bang, some 13.8 billion years ago.

Don Lincoln, a senior scientist at Fermi National Accelerator Laboratory (Fermilab), near Chicago, explains that an atom is made up of even smaller subatomic particles called neutrons, protons, and electrons. And smaller still are quarks and neutrinos. An electron has near-zero mass, but actually weighs 500,000 times more than a neutrino, and there are trillions of neutrinos passing through a human being every second.

Science cannot measure or detect the existence of everything. The characteristic of the universe can indeed be Zhen Shan Ren.

Neither can science explain why the universe came into existence, what preceded the Big Bang, or how consciousness arose in living things. Such realms remain the domain of an immanent creative entity we may well call God, the Tao (Way) or Dafa (Great Law).

Persecution and the Dignity of Dafa

Although so many people were benefitting from improved health through Falun Dafa and morality in Chinese society was improving as well, China’s communist regime has tried to eliminate the practice.

The perverse persecution, beginning in July 1999 and continuing today, is an expression of communist hatred of religion and God.

Quite simply, this assault on Goodness was recognised early by Falun Gong practitioners and their resulting efforts over the past 23 years to peacefully resist and let the world know the truth is filled with tens of thousands of moving testimonies.

One example is a practitioner in 2001, who became homeless to avoid arrest, but was eventually kidnapped and sent to a detention centre.

He sought to rectify all that is not righteous in any environment he faced and explained the principles of Dafa to inmates and guards and was soon released.

“In my jail cell, I didn’t blame the prisoners for fighting with each other. Instead, I reasoned with them, ‘Returning evil actions with evil, people can only learn evil because you release the evil you endured from others to somebody else. But if you return the evil with Goodness, people can learn Goodness and see a bright future. Since the police pretended to be nice to you while they aren’t really kind in their hearts, you can feel their evil and it is evil you have learned. That’s why forced labor re-education can’t change a person’s nature. However, Falun Dafa can change a person fundamentally, making him inclined toward Goodness forever, and making him forever yearn for Goodness and look towards Goodness.’ After I said this, the prisoners stopped fighting from then on and became more considerate of each other.”

Falun Dafa practitioners are not just defending themselves against persecution by the Chinese communist regime. They are defending the underlying characteristic of goodness inherent in the universe, for the ongoing benefit of all human beings.

The divine essence of our humanity can manifest in principles of goodness that protect us, and in hidden ways that may not yet be apparent.

Truth, compassion, forbearance work well as principles to live by. We may also experience its work in divine ways if we open ourselves to it.

Amidst the apparent chaos and confusion surrounding us, May 13 is an opportunity to look inwardly and reflect on the significance of Zhen Shan Ren and celebrate the presence of Falun Dafa in the world today.