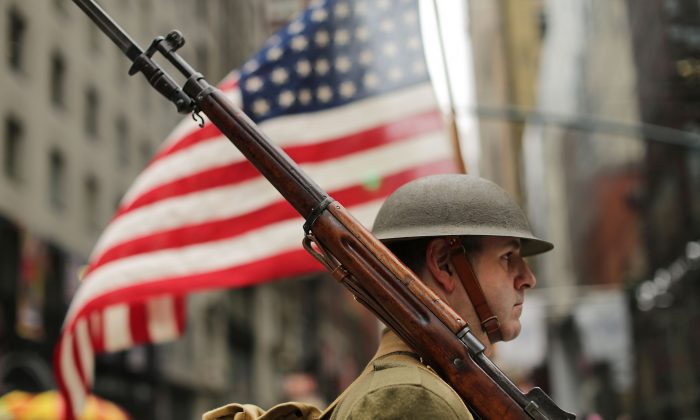 A World War I army re-enactor marches in the nation's largest Veterans Day Parade in New York City on Nov. 11, 2015. Following the end of World War I, a U.S. Army general, Harry Hill Bandholtz, helped to keep the peace in Hungary, preventing the National Museum from being looted by Romanian soldiers. He was part of a long tradition of U.S. peacekeeping.(Spencer Platt/Getty Images)
Viewpoints

Reflecting on the US as World’s Peacekeeper

Should you ever find yourself in Budapest, Hungary, take the time to visit the Szabadság tér (Liberty Square), a park lying across from the U.S. Embassy.

There, you will find a statue of a U.S. Army officer facing the embassy. His posture is stiff and erect. His arms are folded behind his back. His face radiates determination and the certainty of absolute command.

Should you be a history buff, you may recognize his uniform as that of an officer during the World War I era. A plaque on the base of the statue reads, in part, “I simply carried out the instructions of my government, as I understood them, as an officer and a gentleman of the United States Army.”

As the world paused on Nov. 11 to recognize the 100th anniversary of the end of World War I—what was arguably the bloodiest war in human history and more consequential to the growth or decline of Western civilization than any other single event in modern times—it’s fitting that we should remember Bandholtz and the peacemaker/justice arbiter role he played at the end of that conflict.

In many ways, Bandholtz’s legacy, and that of so many others who proceeded and followed him, is what makes the United States’ armed forces, the men and women who serve, and their mission so unique in a troubled world.

One of the tragedies of our time is that the term “police officer” has assumed a sinister connotation among great swaths of our populace today. We can’t universally beatify every individual law enforcement official any more than we could any other segment of the population. Yet, we are a nation governed by laws, and those who strive to enforce those laws, occasionally imperfectly, deserve our respect and gratitude.

The same principle applies to those who serve abroad in uniform. While we often think about our military in terms of the conflicts they are sometimes engaged in, that’s not the norm. The norm is that they serve in peacekeeping roles whenever they are stationed, far from home.

If not nearly as personally terrifying as combat, I imagine that role is more challenging—in different ways—and often requires a degree of thoughtful finesse and a different sort of courage that is far removed from the needs or the rigors of combat.

It’s almost impossible to overestimate how badly World War I devastated Europe. Using the United Kingdom as just one example, combat losses approached 900,000 by the time the war ended. On a percentage basis, that’s equivalent to 6.5 million Americans perishing in battle today. The story was the same in almost every European nation that participated in the carnage.

Europe, in the days following World War I, was a continent in shock, full of fear, resentment, sorrow, and anger. Many wondered if it would ever recover.

Against this backdrop, consider the position of the U.S. military participating in post-war occupation duties.

Compared to what happened to the great powers in Europe, U.S. losses were relatively light—although the families of the 53,402 American soldiers, sailors, and Marines who perished in combat would rightly take exception to that characterization. Still, it is human nature to look down upon those who haven’t suffered as much as you, even if they have in fact suffered.

This is the position that Bandholtz found himself in on Oct. 5, 1919. He was serving in Budapest as one of four generals (English, French, Italian, and American) that led the Inter-Allied Control Commission. Hungary, as part of Austria-Hungary, was allied with Germany in World War I, and, thus, was part of the losing side. Romanian troops occupied much of Hungary, Romania having allied itself with the victorious side.

The job of the Control Commission was to supervise the peaceful withdrawal of Romanian troops from Hungary. Understandably embittered by the brutality of four years of war, the Romanians decided they were entitled to some recompense before they withdrew. Urged on by their commanding general, Romanian troops prepared to loot the Hungarian National Museum and take its treasures back to their home country.

Bandholtz, who was serving as president of the day of the Commission when the crisis blossomed, didn’t hesitate. Armed only with his riding crop, he confronted the would-be looters and—by force of personality and moral certainty alone—persuaded them to withdraw.

A grateful Hungarian people erected a statue to Bandholtz in 1936, placing it in the park where it faced the U.S. Embassy in Budapest. Placed in storage during the Soviet occupation of Hungary, the statue was restored to its rightful place in July 1989.

Bandholtz didn’t create the idea that the United States ought to be an equitable peacekeeper after hostilities cease. Bandholtz wasn’t the first U.S. warrior to value duty above personal safety. He followed and continued a tradition of which every American should be proud.

Is the United States the world’s peacekeeper? It’s a question often asked in derisive tones by detractors. My response: Yes, we are, and we’re proud to serve until somebody else comes along. Just ask Harry Hill Bandholtz.