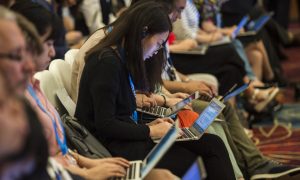 A New Generation of Journalists in China Face the Same Censorship, Despite New Technology
0 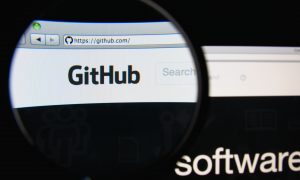 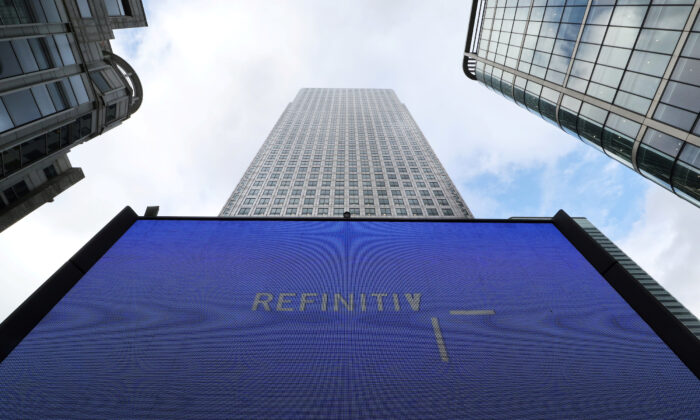 An advertisement for Refinitiv is seen on a screen in London's Canary Wharf financial center, Britain, on Oct. 2, 2018. (Russell Boyce/Reuters)
HK Protests

LONDON—As pro-democracy demonstrations engulfed Hong Kong in August, Reuters broke a sensitive story: Beijing had rejected a secret proposal by city leader Carrie Lam to meet several of the protesters’ demands in a bid to defuse the unrest.

The story buttressed a main claim of the protesters, that Beijing is intervening deeply in the affairs of the Chinese-ruled city. A state-run newspaper denounced the story as “fake” and “shameful.” The article soon became unavailable in mainland China.

The article was removed by Refinitiv, the financial information provider that distributes Reuters news to investors around the world on Eikon, a trading and analytics platform. The article was one of a growing number of stories that Refinitiv—which until last year was owned by Reuters’ parent company, Thomson Reuters Corp—has censored in mainland China under pressure from the central government.

Since August, Refinitiv has blocked more than 200 stories about the Hong Kong protests plus numerous other Reuters articles that could cast Beijing in an unfavorable light. Internal Refinitiv documents show that over the summer, the company installed an automated filtering system to facilitate the censoring. The system included the creation of a new code to attach to some China stories, called “Restricted News.”

As a result, Refinitiv’s customers in China have been denied access to coverage of one of the biggest news events of the year, including two Reuters reports on downgrades of Hong Kong by credit-rating agencies. Nearly 100 other news providers available on Eikon in China have also been affected by the filtering.

Censorship in China has been intensifying in recent years under Chinese leader Xi Jinping, and Western businesses have come under rising pressure to block news, speech and products that Beijing sees as politically dangerous. Refinitiv generates tens of millions of dollars of annual revenue in China. As Reuters reported in June, citing three people familiar with the matter, Refinitiv began the censorship effort earlier this year after a regulator threatened to suspend its Chinese operation.

Refinitiv has joined a lengthening list of companies complying with Chinese demands. They include hotel giant Marriott International Inc., which last year temporarily shut down its Chinese websites and apologized for, among other things, listing Taiwan as a separate country in a customer questionnaire. Several U.S. airlines also stopped describing Taiwan as non-Chinese territory on their websites. Beijing considers the self-governed island part of China. The companies have defended their actions.

The censorship has angered the top news and business executives of Reuters and the directors of the Thomson Reuters Founders Share Co. Ltd., an independent body tasked with preserving the news agency’s independence.

Speaking to Reuters journalists on a visit to the Singapore newsroom in October, Kim Williams, the Australian media executive who chairs the body, lashed out at Refinitiv, calling its actions “reprehensible” and a capitulation to “naked political aggression” from Beijing. Editor-in-Chief Stephen J. Adler told Reuters journalists in London in November that the censorship was “damaging” the brand. “I don’t approve of it,” he said.

Refinitiv chief executive David Craig and Thomson Reuters CEO Jim Smith have held multiple talks, as recently as this week, in an effort to resolve the issue, said people familiar with the matter. Smith “was very concerned” upon learning about Craig’s decision to impose the filtering, said a senior Thomson Reuters official. It is not clear how close the two are to reaching a solution both sides find agreeable, one of the people said.

“We recognize that the processes that were put in place earlier this year need to be improved and are actively working on enhancements,” Refinitiv spokesman Patrick Meyer said of the filtering system in a statement. “As a global business, Refinitiv must comply with the laws and regulations of the countries in which we operate. This is a challenge that not just Refinitiv faces, but also other companies and distributors of financial market information.”

Refinitiv was formed last year when a consortium led by private equity giant Blackstone purchased a 55 percent stake in Thomson Reuters’ Financial & Risk business, which included the Eikon terminal business, for about $20 billion and rebranded it.

Refinitiv and Thomson Reuters remain close: Reuters sells news to Eikon, and Thomson Reuters retains a 45 percent stake in Refinitiv. Refinitiv is by far Reuters’ largest client, providing nearly half its revenue. As part of the spin-off deal, Refinitiv agreed to make inflation-adjusted annual payments of $325 million to Reuters over 30 years for news—a reliable income stream that is rare in the media business.

The Founders Share directors are particularly incensed. They have complained to Thomson Reuters CEO Smith that by suppressing stories, Refinitiv is violating the terms of the deal. They also say they fear that Refinitiv, having given in to China’s demands, might start blocking stories in other countries.

Prior to the Blackstone deal, when Thomson Reuters controlled the Eikon business, Reuters stories were not blocked in China on Eikon. The Chinese regime itself has been blocking access in China to the Reuters website for general readers, Reuters.com, for years, as well as the sites of many other foreign news organizations.

“Let the Chinese decide if they ban something,” said Pascal Lamy, a Founders Share director and former head of the World Trade Organization. “But this is not Refinitiv’s or Reuters’ decision.” Lamy said the directors believe the terms of the deal require Refinitiv to adhere to Reuters ethical rules on editorial integrity and independence, known as the Trust Principles, which “prevent you from accepting self-censorship.”

In response, Refinitiv said it is “complying with our obligations with respect to the Trust Principles.” It argues that in filtering out political stories for its own customers in China, it is following local laws and regulations as required by its operating license.

Smith, who sits on the boards of both Thomson Reuters and Refinitiv, did not respond to requests for comment.

The London Stock Exchange has agreed to buy Refinitiv for $27 billion in a deal that’s expected to close in the second half of next year. It declined to comment.

Reuters reported in June that Refinitiv had blocked several Reuters stories under government pressure. The articles were about the 30th anniversary of the bloody suppression of pro-democracy demonstrations in Beijing’s Tiananmen Square. According to the people with knowledge of the matter, Refinitiv acted after the Cyberspace Administration of China, or CAC, which controls online speech, threatened to suspend the company’s service in China if it didn’t comply.

The CAC did not respond to questions about this article. China’s Foreign Ministry had no immediate comment.

Refinitiv promised it would alert the newsroom when it came under pressure from Chinese regulators about Reuters coverage. The news agency, as it does when it receives any complaint from individuals and institutions it covers, then would determine if there was any reason to correct a published story.

In late July, Refinitiv asked Reuters to review an article that detailed how a Chinese government representative in Hong Kong had urged local residents to drive off protesters, just a week before a violent clash broke out between pro- and anti-government crowds in the area. That story, too, was touchy because it showed Beijing intervening in the internal affairs of Hong Kong.

Despite assurances from Reuters that the story was accurate, Refinitiv removed the headline of the story from Eikon in China, making the item difficult for users to find and view. On Aug. 2, Reuters published a story about the blocking of this article as well.

Refinitiv began ramping up its efforts to purge offending China coverage. Internal Refinitiv documents and emails describe how the company over the summer created an automated filtering system—referred to as the “Strategic China filter”—to block certain stories to Eikon users in mainland China.

In July, Refinitiv’s news platform architecture director requested that a new code be created, called “Restricted News,” that could be added to articles. He asked that it “should be hidden for all users (internal and external),” according to notes of a conference call on July 17 where the code was discussed. One reason was that Refinitiv didn’t want to give its mainland China customers the ability to disable the filtering.

In an email to colleagues, the platform director explained the code: “The flag is to highlight news that requires additional processing, due to Chinese govt restrictions, prior to consumption in China.”

The filtering system is designed to block stories for readers in mainland China but allow them to be accessed in other markets. It looks for restricted keywords in headlines, such as “Hong Kong” and “protest,” according to a person familiar with the matter.

Refinitiv employees also discussed by email whether the “Restricted News” code should be China-specific or “generic,” so it could be used to block stories in other countries in the future. The email exchange indicates they opted for a generic code. Reuters found no evidence that Refinitiv has deployed the filtering system in other nations. Refinitiv didn’t comment on whether it plans to use the restriction code elsewhere.

Eikon users outside mainland China can retrieve stories about the Hong Kong protests by clicking on headlines, or by searching for keywords or codes. For users inside China, however, articles that are blocked bring up this message: “You do not have access to this story.”

Refinitiv’s blocking of protest stories intensified after Aug. 30, when Reuters reported that Beijing had rejected a bid by Hong Kong leader Lam to compromise with the protesters. Before that date, all but five of 246 Reuters articles that had run in 2019 containing the words “Hong Kong” and “protest” in the headline were accessible on the mainland. By contrast, between Aug. 30 and Nov. 20, Refinitiv blocked nearly four out of five such articles that Reuters filed—196 out of 251.

The censorship was especially severe between Sept. 4 and Oct. 7, when all 104 Reuters articles containing those words in the headline were blocked. At the time, demonstrators were rampaging across the city and police were responding with water cannons and rubber bullets.

Refinitiv also censored potentially market-moving stories that would have been of interest to Refinitiv’s core clientele of financial professionals. These included a Sept. 6 report that Fitch Ratings had downgraded Hong Kong’s long-term foreign currency issuer default rating. Also blocked were stories on the effect of the protests on stock prices and initial public offerings.

Refinitiv eventually began having employees get involved in the filtering process to prevent the blocking of financial stories, according to a person familiar with the matter. Yet the filtering remains inconsistent.

It lets through some stories that China might consider politically taboo, including some articles about the Chinese regime’s mass incarceration of Uyghurs, a Muslim ethnic minority in western China. Many other articles on the Uyghurs have been blocked.