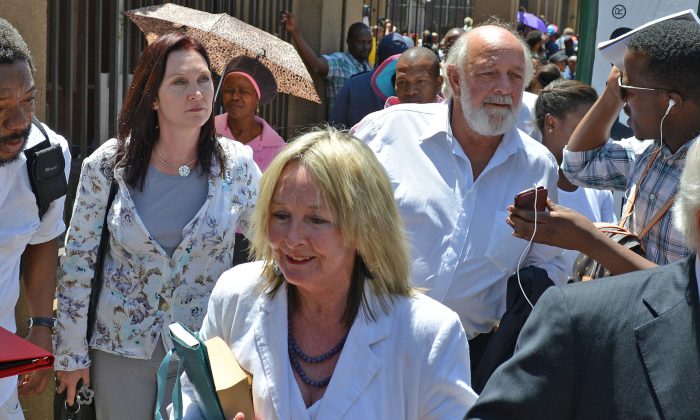 The parents of Reev a Steenkamp, who was killed by Oscar Pistorius, said that they’re relieved he will be spending time in prison.

June and Barry Steenkamp have been at many days of the trial, which finally concluded on Tuesday after Pistorius was sentenced to five years in jail after getting convicted of culpable homicide.

“It was the best sentence we could have expected,” the parents told Hello magazine after the sentence was announced.

“We’re not looking for vengeance or for him to get hurt; we’re just happy because he’s going to be punished for what he’s done. He may come out early on good behavior, but by the time he’s served that time, it will have taught him that he can’t go around doing things like that.

“I believe Oscar expected to go to prison,” continued June, who attended every day of the court case. “He was almost resigned to what was coming. It was obvious in the court from his manner; he was calm and wasn’t performing.”

“We’re both satisfied with the result and are relieved it’s all over. All we want to do now is get on with our lives,” Barry added.

Outside the courtroom in Peretoria, June told reporters that “it doesn’t matter” that Pistorius could be out of jail in as little time as ten months.

“He’s going to pay something,” she said, reported Sky News.

She said that the trial has provided her with some type of closure but that there’s no real closure for her and her family “unless you can make [Reeva] come back.”

The family’s lawyer added: The family wanted justice, justice has been done,” adding June was “satisfied” by the sentence.

PRETORIA, South Africa—Oscar Pistorius was sentenced to five years in prison Tuesday for killing girlfriend Reeva Steenkamp, completing a transformation from an acclaimed sprinter at the 2012 Olympics to a convicted criminal led away in a police van with barred windows.

Wearing a dark suit, the double-amputee athlete was subdued when Judge Thokozile Masipa announced the punishment in a Pretoria courtroom, ending a televised trial that was closely followed at home and abroad by those who once admired him.

The man known as the “Blade Runner” because of his carbon-fiber running blades will have to serve 10 months, or one-sixth of his sentence, in prison before he is eligible to be moved to house arrest, legal analysts say.

South Africans seemed torn between acceptance of the ruling, touted by some as an example of judicial accountability in a nation that shed white racist rule 20 years ago, and nagging concern thatPistorius received leniency because he was rich and famous.

“Crime is crime and you’ll pay for it,” said Petrus Lekota, a Johannesburg resident who noted thatPistorius’ well-paid legal team was unable to keep him out of jail.

However, law student Yazeed Mia was surprised that Masipa had earlier acquitted Pistorius of murder and instead convicted him of the lesser crime of culpable homicide, or negligent killing.

“He’s now set a precedent for future crimes,” Mia said. “If a man wants to kill his wife, all he has to do is wait for her to go to the bathroom and shoot her through the door.”

Even if he leaves prison early, his running career is in doubt. The 27-year-old Pistorius, who has won six Paralympic gold medals, will be ineligible to compete in those events during the entirety of his five-year prison sentence, “regardless of where it is served,” the International Paralympic Committee said. Pistorius still could challenge that decision.


The sight of Pistorius racing around the track on his blades was one of the enduring and inspirational images of the London Olympics. Born without fibula bones due to a congenital defect, he had his legs amputated at 11 months old, but grew up playing sports with prosthetics.

Pistorius won his first gold medal at the 2004 Paralympics but was banned from competing against able-bodied athletes because it was argued that his blades gave him an unfair advantage. He successfully appealed that ban and later qualified for the London Olympics.

Although he did not win an Olympic medal, Pistorius was cheered for his achievement, and he reveled in his appearance. Even though he finished last in a semifinal heat of the 400 meters, he said: “To step out in front of a crowd this massive, it’s a mind-blowing experience. I’ve had support in the last couple of days like I have never felt before.”

Millions around the world and in South Africa saw Pistorius as a symbol of determination over adversity, and he enjoyed lucrative sponsorship deals, all of them now canceled.

His work with charity, including disabled children, burnished his image, and people warmed to his easygoing, charismatic side. But he also took personal risks with fast cars and motorbikes, and he said in a 2012 interview with The Associated Press that a 2009 high-speed boat crash made him realize “that I need to make some changes, and some of them need to be with my lifestyle.”

In reaching the verdict against Pistorius last month, Masipa accepted his account that he accidentally shot Steenkamp, a 29-year-old model and television personality, through a closed toilet door in his home after mistaking her for an intruder on Valentine’s Day 2013.

At the sentencing, Masipa delivered an hour-long, nuanced argument that dwelled on case law, the principle of clemency, the danger that a light sentence could embolden victims to take the law into their own hands, and the difference between public opinion and what is in the interests of society.

“I am of the view that a non-custodial sentence would send a wrong message to the community,” she said. “On the other hand, a long sentence would not be appropriate either, as it would lack the element of mercy.”

Pistorius also received a three-year, suspended jail term for negligent handling of a firearm in a separate case — the discharge of a gun in a crowded restaurant in January 2013, shortly before he killed Steenkamp.

Masipa asked Pistorius to stand as she delivered the sentence, and he faced her with hands clasped in front of him. He was then led down a staircase in the middle of the courtroom, stopping briefly to grip the hands of his uncle, Arnold Pistorius, and other family members who have attended nearly every day of the trial that began March 3.

Still in his suit, Pistorius left the courthouse in a police van with caged windows. A crowd gathered around, with some whistling, shouting and banging on the sides of the vehicle.