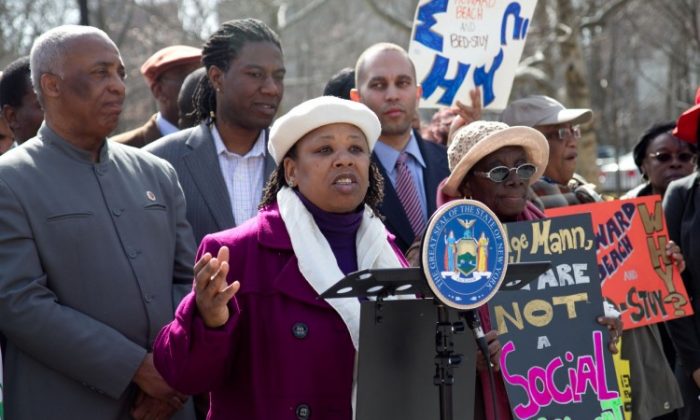 NEW YORK— Redistricting has become a civil rights matter, according to a group of 20 to 30 African-American community members and elected officials gathered at the federal courthouse at Cadman Plaza in Brooklyn on Thursday.

“I’m no demographer,” said Assemblyman Hakeem Jeffries, “but I don’t think Howard Beach has anything in common with Bedford-Stuyvesant.”

The federal constitution requires redistricting plans to keep communities of interest together where possible.

“You have traditionally African-American communities in Fort Greene and Clinton Hill that are part of the same community of interest as Bedford-Stuyvesant,” said Jeffries.

He listed off their other common interests, including sharing the same commercial corridor along Fulton Street and Myrtle Avenue, the same school district, and the same means of mass transportation along the A, C, and G line trains.

Jeffries currently serves a Fort Greene Assembly district and hopes to run for a congressional seat that largely overlaps that district. Mann’s redistricting proposal would change that, pitting him against incumbent Rep. Ed Town without the benefit of his assembly district constituents to back him up, according to the New York Times.

Both Jeffries and Councilman Charles Barron, whose run for congress could also be impacted by Mann’s redistricting plan, insisted their primary concern is not personal political interests. Rather, it is what they see as an intentional act of “divide and rule” perpetrated by white lawmakers.

Mann’s plan for Harlem has drawn ire from some African-American community groups for the same reason.

Barbara Bartoletti, legislative director of the New York State League of Women Voters, said she feels Judge Mann did a good job upstate in keeping together communities of interest, and notes that she had a “tall order” to fill.

“[Mann] actually changed what the proposal was for Buffalo and Rochester to keep communities of interest together, and we felt she did a good job of that,” said Bartoletti in a phone interview. She noted that Mann also kept together communities of interest in Albany threatened in the state legislature’s proposals. Mann’s plan also created an Asian majority district in Queens.

Bartoletti added, “However, we are aware that the most contentious lines have been in Mr. Rangel’s area [Harlem].”

The judge’s plan will go before a three-judge panel on March 15. If the state legislature comes up with their own plan in the meantime that meets with Gov. Andrew Cuomo’s approval, Mann’s plan will be scrapped.

Bartoletti said the expectation in Albany is that the legislature will adopt Mann’s plan, with some tweaking, early next week. If this is the case, then the plan must go through the Department of Justice after it leaves the legislature to confirm if it complies with the Voting Rights Act, which is what insures that communities of interest are kept intact.

If the legislature is unable to finalize a plan by March 15, Mann’s plan will go into effect as is. The approval of the three-judge panel will be sufficient to decide that the plan meets the Voting Rights Act requirements.