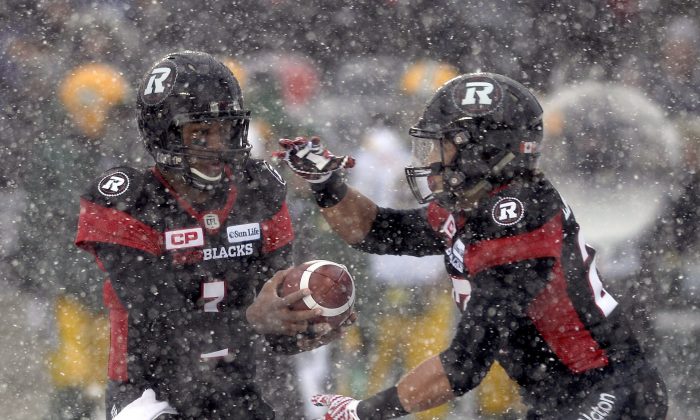 OTTAWA—Under wintry conditions, the Ottawa Redblacks simply executed better than the defending Grey Cup champion Edmonton Eskimos, coming away with a 35–23 win on Sunday, Nov. 20. Ottawa returns to the Grey Cup, being held in Toronto at BMO Field Sunday, Nov. 27. Ottawa faces the Calgary Stampeders—comfortable winners over the B.C. Lions.

“It’s a big deal to go to the Grey Cup. I’m so happy for our fans too. They’ve been first rate all year,” said Redblacks head coach Rick Campbell.

The game started as a major snowstorm began hitting the nation’s capital and the field remained covered by a layer of snow. Hot air blowers, sweepers, and shovels were used to clear the lines. Some red lines near the sidelines even needed to be repainted at halftime.

The Eskimos, who had won six of their last seven games, were unable to get their top-ranked offense going until too late. White, who ran for 160 yards against Hamilton in the East semi, had only 21 yards at halftime against Ottawa. The ultra-reliable Sean Whyte missed his first field goal of the season from inside 50 yards at the end of the second quarter.

But the big blow to Edmonton came in the third quarter when Ottawa’s Tristan Jackson returned a punt 75 yards for the TD. The two-point conversion to Patrick Lavoie gave the Redblacks a 25–3 lead.

Edmonton had the wind at their backs in the third quarter, but couldn’t get anything going offensively until a late Adarius Bowman TD catch. Bowman caught a second TD pass late in the fourth quarter to bring the visitors to within five points. But that’s as close as they came.

Lafrance was having a huge game and running in the snow didn’t seem to affect him in the least. He ran for 157 yards on 25 carries. His 20-yard TD run gave the Redblacks the breathing room they needed late in the fourth quarter.

Campbell was happy for Lafrance getting some recognition. “The game wasn’t going to be too big for him. He never was like that [deer in the headlights],” Campbell said about his young running back.

The snowstorm didn’t prevent the 12th-straight sellout at TD Place as 24,248 braved the wintry conditions.

Ottawa got its revenge over Edmonton from last year’s Grey Cup in a game with a game-time temperature of -1 C. The wind swirled and gusted at 50 km/h—certainly Canadian playoff football weather.