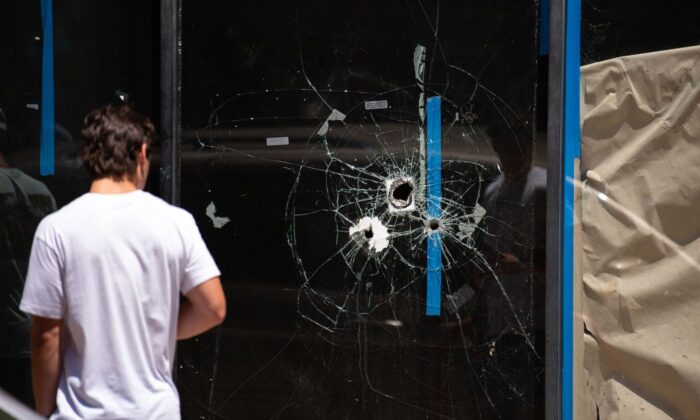 A pedestrian walks past bullet holes in the window of a store front on South Street in Philadelphia, Penn., on June 5, 2022. (Kriston Jae Bethel/AFP/Getty Images)
Viewpoints

After decades of falling crime rates, violence is spiking again on U.S. streets.

According to FBI data, violent crime increased by nearly 30 percent in 2020 compared to 2019, and while national data for 2021 isn’t yet complete, data from major cities, such as Los Angeles, Seattle, and Washington, show further increases in murders and assaults. The Council on Criminal Justice estimates that the murder rate in 2021 increased another 5 percent from 2020.

In addition to violent crimes, there are other signs of disorder. Property crimes have increased in some major cities, and in others, formerly clean and family-friendly areas of major cities have been overrun by vagrancy. Homeless encampments operate as open-air drug markets. It has gotten so bad in some cities, such as San Francisco, that apps have been developed to allow citizens to report feces left by the city’s homeless residents.

Crime, drug addiction, and homelessness are complicated issues impacted by many factors. Certainly, the COVID-19 pandemic has played a role. However, there’s also no doubt that the hard left push to delegitimize law enforcement and the criminal justice system is helping drive the rising crime and disorder. Throughout the country, left-wing district attorneys have openly declared their intention to stop prosecuting crimes and tolerate vagrancy, with entirely predictable results.

Voters are beginning to render judgment—most recently in liberal San Francisco, which voted overwhelmingly to recall its hard-left district attorney. Similarly, defund-the-police candidates in heavily Democratic cities have been losing to more sensible candidates who pledge to increase funding for police and crack down on vagrancy—most notably in New York, which last year elected former New York Police Captain Eric Adams as mayor.

This is a welcome push back against the hard left, which is so animated by the belief that the United States is a racist, evil country that it only views the law and law enforcement as tools of oppression to be delegitimized and dismantled.

There’s a danger, however, that as part of the backlash against the hard left’s burn-it-all-down approach to law enforcement, we’ll abandon smart, effective justice reform. In fact, over the past decade, red states, such as Texas, Missouri, and Oklahoma, have enacted reforms that reduced crime, aided victims, reformed offenders, and lowered the financial burden on taxpayers.

In Texas, state leaders realized that prison was a costly and ineffective tool for dealing with drug addiction and low-risk, nonviolent offenders. However, rather than taking the left-wing approach of simply refusing to enforce the law, Texas created rehabilitation pathways for people struggling with mental illness, addiction, and those on parole or probation. Texas leaders took seriously their responsibility to protect the public, but they also recognized the importance of providing opportunities for redemption. The result was increased public safety, with crime dropping by 29 percent; higher supervision success rates; and more than $2 billion saved in prison costs.

Other red states have followed the Texas model, continuing to enforce the law to protect the public while recognizing that prison is an expensive and ineffective tool for dealing with nonviolent criminals.

In 2016, Oklahoma had the highest incarceration rate globally. This deeply conservative state responded with reforms in 2018 that moved nonviolent offenders out of prison and into parole, where they could have an opportunity to rehabilitate and prove that they could be productive, law-abiding members of society. Similarly, after the ranks of Missouri’s prison population swelled because of the methamphetamine epidemic, the conservative state created special addiction treatment pathways and reduced barriers to occupational licensing for people returning from prison.

Other red states have further demonstrated their commitment to both public safety and rehabilitation. They recognized many probation rules were counterproductive and made it difficult for parolees to maintain jobs and get their lives together, instead pushing them back to a life of crime. Recognizing that people want to work, Gov. Ron DeSantis in Florida recently signed a Republican-led probation reform measure that features practical changes, such as allowing probationers to check in remotely with their probation officers, so they don’t have to leave their job sites during work hours. It also contained new incentives for probationers, such as opportunities to reduce their terms by completing a high school diploma or college degree or holding a steady job.

These smart, effective red state justice reforms reinforce the rule of law by recognizing the justice system’s dual responsibility to protect the public and rehabilitate the offender. Let’s be sure to continue this progress toward a more effective justice system, even as we reject the defund the police madness of the hard left.