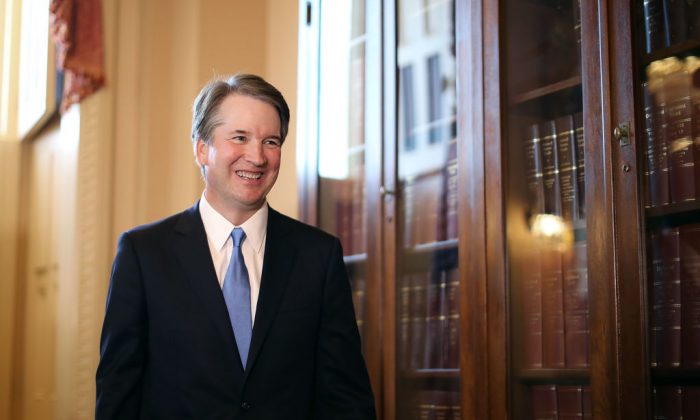 Trump announced Kavanaugh’s nomination at the White House on July 9. Republicans have a razor-thin majority in the Senate and aim to confirm the conservative judge before midterm elections in November.

Scores of Senate Democrats opposed the nomination as soon as Trump revealed his pick. Senate Minority Leader Chuck Schumer issued a hostile statement within minutes of the announcement.

The three exceptions to the trend were from states where Trump won by a hefty margin: Sen. Joe Donnelly (D-Ind.), Sen. Heidi Heitkamp (D-N.D.), and Sen. Joe Manchin (D-W.Va.).

The lack of immediate disapproval by the three red-state Democrats tips the balance in favor of the Republicans early on in a confirmation battle many believe will be fierce.

Donnelly, Heitkamp, and Manchin are running for reelection in November in districts Trump won in 2016. Many voters chose Trump because he promised to staff the top court with conservative justices.

Of the three statements, only Manchin’s mentions any potential concerns. He notes that the Supreme Court will eventually have to decide whether insurance companies are required pay for treatments for pre-existing health conditions, a controversial mandate under Obamacare.

“This decision will directly impact almost 40 percent of my state, so I’m very interested in his position on protecting West Virginians with pre-existing conditions,” Manchin said.

Manchin faces reelection against State Attorney General Patrick Morrisey in West Virginia, a state Trump won in 2016 by 42 points. The rest of his statement shows no opposition to Kavanaugh and focuses on Manchin’s responsibilities as a senator.

“As I have always said, I believe the Senate should hold committee hearings; senators should meet with him, we should debate his qualifications on the Senate floor and cast whatever vote we believe he deserves,” Manchin said.

“As I stressed to the president during our meeting two weeks ago, one of the most important jobs of any U.S. senator is to fully vet any nominee to serve on the Supreme Court, the highest court in our land,” Heitkamp said in a statement released within minutes of Trump’s announcement. “Now I’ll get to work to thoroughly review and vet his record to provide advice and consent for filling this vacancy, which is part of my constitutional duty.”

Donnelly’s statement read: “As I have said, part of my job as senator includes thoroughly considering judicial nominations, including to the Supreme Court. I will take the same approach as I have previously for a Supreme Court vacancy. Following the president’s announcement, I will carefully review and consider the record and qualifications of Judge Brett Kavanaugh.”

The three senators met with Trump on June 28 to discuss the Supreme Court vacancy. They declined to attend the announcement of the nomination on July 9. But the trio also did not immediately heed a call from Senate Minority Whip Dick Durbin, who told NBC’s “Meet the Press” over the weekend that red-state Democrats should sacrifice their reelection chances to block Trump’s nominee.

Other Reactions From the Senate

The three red-state Democrats’ tone is much different from that of the majority of Senate Democrats, who came out of the gate swinging against Kavanaugh.

The potential for a unanimous confirmation vote by Republicans increased after centrist Republican senators Lisa Murkowski of Alaska and Susan Collins of Maine signaled comfort with Kavanaugh. The pair had vowed to vote against any nominee who would overturn Roe v. Wade, the 1973 Supreme Court ruling that struck down laws limiting and criminalizing abortions nationwide.

Murkowski and Collins voted to confirm Gorsuch last year. Both also voted to confirm Kavanaugh to the District of Columbia Circuit Court of Appeals in 2006. Neither revealed how they would vote this time around, nor did they betray any concerns with the nomination.

Murkowski told Politico that some of Trump’s other picks could have been more problematic.

“Let’s put it this way: There were some who have been on the list that I would have had a very, very difficult time supporting, just based on what was already publicly known about them,” Murkowski said. “We’re not dealing with that.”

Republicans hold a 51–49 majority in the Senate. Considering that Sen. John McCain won’t be back from sick leave for the vote, the advantage drops to 50–49. But with red-state Democrats and centrist Republicans showing no immediate opposition, the chances for blocking the confirmation appear slim.

Instead, Schumer showed on July 9 that Democrats might seize on Kavanaugh’s enormous paper trail to delay the confirmation.

Kavanaugh authored hundreds of judicial opinions over the past 12 years. Before that, he worked in the George W. Bush White House, with piles of documents crossing his desk. Democrats have the right to request these documents and ask for ample time to review them, a tactic which, if abused, can push back the date of the first committee hearing.

“The Senate should have the ability and time to review Judge Kavanaugh’s written history, where the best clues to his jurisprudence may lie,” Schumer wrote in one of several Twitter messages on the topic on July 10.

Over the past four decades, the longest time a Supreme Court nominee had to wait between his or her nomination and the first confirmation hearing was 70 days in the case of Justice Robert Bork, according to the Congressional Research Service. If the Democrats manage such a record delay, Kavanaugh’s first hearing will happen in mid-September, less than two months before the midterm elections on Nov. 6.