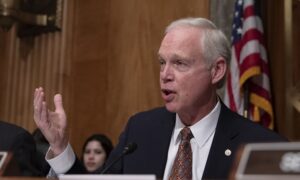 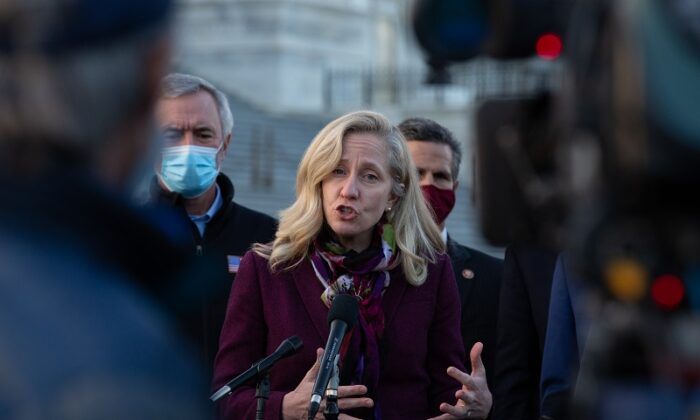 Rep. Abigail Spanberger (D-Va.) speaks at the podium standing with members of the Problem Solvers Caucus in a press conference outside the U.S. Capitol on Dec. 21, 2020. (Cheriss May/Getty Images)
Congress

Don’t ask 14 “Red District” House Democrats about H.R.1 (the “For the People Act”), which would reform future elections on the same model that made 2020 one of the most bitterly disputed in U.S. history.

Despite repeated inquiries by The Epoch Times, none of the 14 lawmakers agreed to discuss what Republican critics argue is likely to be the most consequential proposal to come before the 117th Congress.

Given that Speaker of the House Nancy Pelosi (D-Calif.) has such a narrow majority, 221–211, a switch of only six Democrats to oppose H.R.1 would kill it. That’s why these 14 Democrats in red districts are already the focus of intense pressure from the measure’s opponents.

Five of the Red District Democrats represent districts that Trump carried in both 2016 and 2020, most by solid margins, while he won the districts of the other nine in 2016 and only lost to President Joe Biden in 2020 in most by small margins.

The five include Reps. Ron Kind of Wisconsin, Andy Kim of New Jersey, Elissa Slotkin of Michigan, Cheri Bustos of Illinois, and Cindy Axne of Iowa.

Pelosi and Senate Majority Leader Chuck Schumer (D-N.Y.) rank the proposal as their top legislative priority in 2021. Biden has promised to sign it when it reaches his desk.

The proposal brings together in one bill a veritable Democratic wish list of changes in virtually every aspect of campaigning and voting in federal elections for president and members of Congress.

Enactment of H.R.1 would institutionalize on a nationwide basis controversial registration and voting procedures that were hastily enacted in six states in 2020, mostly in response to the CCP virus pandemic and that subsequently prompted multiple allegations of voter fraud in the presidential election.

The most notable provisions include nationwide online voter registration, with minimal verification requirements; same-day registration; automatic voter registration unless an individual specifically requests not to be registered; legalization of ballot harvesting, and making it illegal to disclose how an individual responded when asked if they are a U.S. citizen when registering to vote.

It also includes nationwide registration of 16- and 17-year-olds; availability of mail-in ballots with minimal screening qualifications; and restoration of felons’ voting rights after release from prison.

But those are only the provisions that affect voter registration and election procedures. Other parts of the bill place the redistricting process under the supervision of congressionally mandated independent commissions, and restructure the Federal Election Commission (FEC) to majority-party control from its current bipartisan voting requirement.

It also would permit members of Congress to draw salaries from campaign funds in addition to their official compensation, and includes findings supporting statehood for the District of Columbia and Puerto Rico.

There has been some talk in congressional hallways about asking Pelosi to break H.R.1 into three or four separate pieces, a move that would give at least a few of the silent Democrats some leverage in being able to support some parts of the proposal while opposing others. But nobody would confirm that such an appeal has been made to Pelosi.

That the 14 Red District Democrats wouldn’t discuss H.R.1 comes as no surprise to Jessica Anderson, executive director of Heritage Action for America.

“It’s not surprising that left-wing members of Congress don’t want to talk about their bid to grab power and rewrite America’s election rules,” Anderson told The Epoch Times on Feb. 16.

“They know that Americans want more election integrity, not less. They certainly don’t want to allow the federal government the power to unconstitutionally overrule the states to destroy voter ID laws, force states to allow felons to vote, promote ballot harvesting, and more.

“That’s why these politicians would rather talk about anything except the most consequential bill they will vote on this year.”

Anderson’s group is already running ads in the districts of the 14 lawmakers that are designed to pressure them into opposing the measure.

Other H.R.1 critics attributed the silence of the 14 to the sheer scope of the proposal.

“H.R. 1 is a massive federalization of voting and removes the proper role of the states in determining the rules,” Republican congressional strategist Brian Darling told The Epoch Times.

“Just as many conservatives thought there was no basis to contest the counting of the electoral votes from certain states where fraud was alleged, these same conservatives should dig in and fight against liberal Democrats’ use of federal power to seize control of state voting procedures and laws. H.R. 1 is a frontal assault on federalism,” Darling said.

Americans for Limited Government (ALG) President Rick Manning said the Democrats’ silence is attributable to the fact Trump voters are especially opposed to any measure that expands controversial voter registration and election procedures that marred the 2020 balloting.

“Real election reform with increased signature verification is a top issue for many Trump voters, but H.R.1 does the exact opposite and vulnerable House Democrats want to pass it without scrutiny,” Manning said.

“Votes against or for certain sections of the bill makes them specifically accountable for easily defined changes, which is politically dangerous.”

Taxpayers Protection Alliance (TPA) President David Williams suggested opposition to H.R.1 may be coming on the left, as well as among conservatives.

“H.R.1 is very problematic on a number of fronts, but the biggest area of agreement that center-left and center-right groups have is mandatory donor disclosure. Both sides find this very problematic,” Williams told The Epoch Times.

“In a time of hyper vitriol, neither side wants to be forced to disclose donors because of the potential privacy and safety concerns of the donors,” he said.