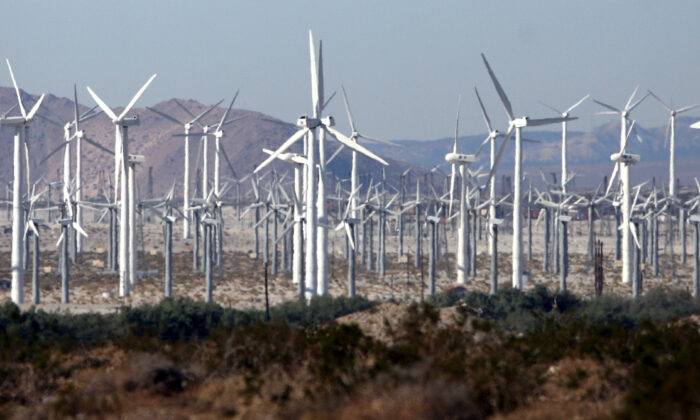 After pictures of old wind turbine blades being buried in a landfill began to circulate online last year, the wind power industry moved to emphasize its commitment to sustainability, with Siemens Gamesa recently unveiling a new recyclable blade for offshore installations—but critics have questioned the industry’s sincerity, as well as its willingness to bear the full costs of operation.

“Up until recently, the industry has not made an attempt to discuss recycling of blades,” Lisa Linowes, director of The WindAction Group, which is critical of wind power, told The Epoch Times.

“Until those photographs started showing up in Wyoming of hundreds of blades being laid out in a landfill, the industry was silent on the question. They are only now, because of public pressure, making a comment on it, and making an attempt.”

According to Linowes, wind turbine blades can rapidly become pitted and lose efficiency due to weather, in addition to suffering from insect buildup. That means blades need to be replaced frequently.

A spokesperson for wind turbine-maker Siemens Gamesa told The Epoch Times via email what it sees as the advantages of its new blade design, stating that the composite materials used in conventional blades make them difficult to recycle.

“The new material has a different chemical structure, which makes it possible to dissolve the resin in an efficient process at end of [service life],” the spokesperson said.

“This is a mild process—in contrast to known ways of recycling conventional wind turbine blades—which means that the materials used for the blade can now be recycled into new applications.”

The spokesperson said that three of Siemens Gamesa’s customers—RWE, EDF Renewables, and wpd—have already made agreements to install the company’s new RecyclableBlades as part of various offshore wind projects.

Michele Mihelic of the American Clean Power Association (ACP), an industry group, voiced her support for research aimed to reduce the waste from turbine blades.

“There are a number of research and development projects underway, and one interesting aspect is work being done to manufacture blades from recycled materials and for recycling at end of life,” Mihelic told The Epoch Times. “We encourage our members and the industry to continue to improve and utilize technology toward sustainability and conserving the environment.”

Asked about a Sept. 11 viral tweet that claimed “there is presently no way to recycle” wind turbine blades, alongside a picture of a landfill full of those blades, Mihelic said that blades and other windmill components can in fact be recycled.

“The turbines are made from multiple materials which, at the end of its life cycle, those materials are recycled or reused,” she said. “Copper is an expensive raw material which would be extracted for its high demand.”

Linowes said that many turbine components that the industry describes as recyclable are, in practice, very expensive to recycle.

“You’re talking about a structure that stands about 200, 300 feet tall—that’s not transportable by itself, so when it’s taken down it has to be cut into pieces,” she said. “That’s still an open question, the extent to which they’re recycling the rest of the turbine, not even including the blades.”

“If there is going to be an industry that grows around the recycling of turbine parts, we’re not seeing it yet.”

In Linowes’s view, the debate over recycling is part of a broader debate over the costs and responsibility for decommissioning old turbines.

Citing a plan from New Hampshire, where developers cannot subtract those costs in such plans, she projects that it costs $200,000 to $300,000 to take a turbine down.

“The majority of the turbines that have been installed in the United States have no decommissioning plan associated with them—there’s no money set aside to cover the cost of taking these turbines down,” she said.

“I think we’re looking at something that could be a serious problem down the road—and not even that far down the road, because if a turbine is still operating from 2005, it’s probably going to reach its end of life very soon.”

Debates over the waste produced by wind power are also influenced by estimates of the carbon emissions avoided by using the technology.

A spokesperson for the ACP wind power group provided a fact sheet detailing wind turbine end-of-life strategies, which estimated that wind turbines could eliminate a third of global carbon emissions by reaching 35 percent of the grid in 2050.

Linowes thinks projections of future wind output could be far too optimistic, given the close correlation between federal subsidies and performance.

She pointed to a recent study of wind turbines in the United States showing that performance fell after 10 years, which is the point at which turbines lose eligibility for production tax credits.