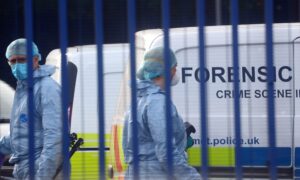 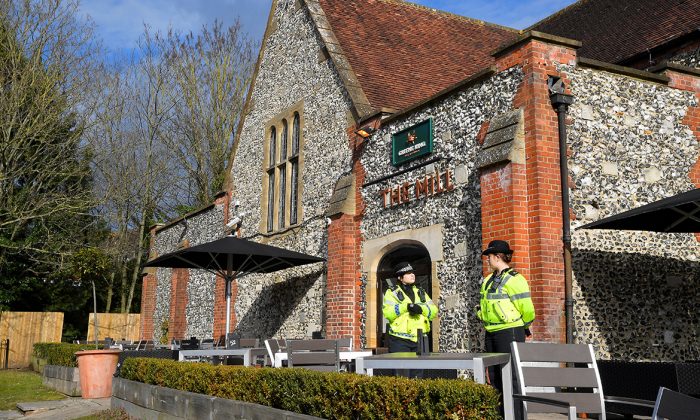 Police officers stand outside a pub near to where former Russian inteligence officer Sergei Skripal, and his daughter Yulia were found unconscious after they had been exposed to an unknown substance, in Salisbury on March 7, 2018. (Reuters/Toby Melville)
UK

LONDON/MOSCOW—Yulia Skripal on Thursday made her first public comments since being poisoned in Britain last month with her father, a former Russian double-agent, saying she was getting stronger by the day but shedding no new light on the incident.

The British Metropolitan police released a statement on Yulia’s behalf:

“I woke up over a week ago now and am glad to say my strength is growing daily. I am grateful for the interest in me and for the many messages of goodwill that I have received.

“I have many people to thank for my recovery and would especially like to mention the people of Salisbury that came to my aid when my father and I were incapacitated. Further than that, I would like to thank the staff at Salisbury District Hospital for their care and professionalism.

“I am sure you appreciate that the entire episode is somewhat disorientating, and I hope that you’ll respect my privacy and that of my family during the period of my convalescence,” the statement read.

Yulia, 33, and Sergei Skripal, 66, were found slumped unconscious on a public bench outside The Maltings shopping center in the English city of Salisbury on March 4.

A police officer, Detective Sergeant Nick Bailey, was one of the first to respond to the incident. He was taken to hospital and later released.

Britain said more than 130 people were affected by the attack. More than 50, including three children, reported to hospital.

Britain said they were poisoned with a military-grade nerve agent Novichok A-234, the first known use of such a toxin on European soil since World War Two.

May said her government had concluded that it was “highly likely that Russia was responsible” for the poisoning or that it had lost control over some of the nerve agent. Moscow denies any involvement.

The incident has had major diplomatic ramifications, with mass expulsions of Russian and Western diplomats.

“We have told our British colleagues that ‘you’re playing with fire’ and you’ll be sorry,'” Russian U.N. Ambassador Vassily Nebenzia told a meeting of the United Nations Security Council on Thursday that Moscow had requested.

“We didn’t do it, we’re not guilty,” Nebenzia said.

British U.N. Ambassador Karen Pierce told the Security Council that Britain’s actions “stand up to any scrutiny” and pledged to keep the 15-member body updated on the inquiry.

“We have nothing to hide … but I do fear that Russia might have something to fear,” Pierce said.

The attack left the Skripals in critical condition and doctors had initially feared that even if they did survive, they might have suffered permanent brain damage.

But while her father remains stable in intensive care, Yulia’s health has improved rapidly. Her recovery means she can help British counter-terrorism police with their investigation although she did not give any details about what had happened in her brief remarks.

Britain’s Foreign Office said she had been offered assistance by Russia’s embassy but had so far declined.

Hours before the statement issued by British police, Russian state TV and Interfax reported that Yulia had phoned her cousin Viktoria Skripal in Russia, saying she and her father were both recovering and that she expected to leave hospital soon.

Asked about her father’s health, Yulia was cited as saying: “Everything is fine, he is resting right now, sleeping … nobody has any problems that can’t be put right.”

Russian state TV said it could not vouch for the authenticity of the quotes. Viktoria Skripal has said she plans to travel to England if she can get a visa.

Police believe the nerve agent was left on the front door of the home in Salisbury where Skripal, a military intelligence colonel who betrayed dozens of Russian agents to Britain’s MI6 spy service, lived after he was freed in a spy swap.

The attack has driven Moscow’s relations with the West to a low.

On March 14, May ordered 23 Russians who she said were spies working under diplomatic cover to leave Britain.

On the eve of its March 18 presidential election, Russia ordered 23 British diplomats out of Moscow. It also shut down the activities of the British Council, which fosters cultural links, and Britain’s consulate-general in St Petersburg.

The leaders of the United States, Germany, France and Germany condemned the first known use of a military-grade nerve agent in Europe since World War Two, saying it threatened the security of the West.

On Wednesday, Russia lost its call for a joint inquiry to be held into the poisoning at a meeting of global watchdog — the Organisation for the Prohibition of Chemical Weapons (OPCW) in The Hague.

Moscow’s ambassador to London Alexander Yakovenko said on Thursday Russia had never made Novichok, the Soviet-era nerve agent which British experts say was the toxin used.

He said the Kremlin would accept the results of OPCW tests but only if there was transparency and they were confirmed by experts from outside Europe and NATO.

While scientists at the Porton Down biological and chemical weapons laboratory near Salisbury have concluded the toxin was Novichok, its chief executive said on Tuesday they had not yet determined whether it was made in Russia.

That prompted even some allies to say London needs to provide more evidence of Russian culpability.

Britain says there is no plausible explanation other than that Russia was behind the attack and Foreign Secretary Boris Johnson has accused Russia of running a disinformation campaign.

A number of Russians have died in mysterious circumstances in Britain in recent years including dissident Alexander Litvinenko who was poisoned with a rare radioactive isotope in 2006. A British inquiry concluded his murder had probably been ordered by Russian President Vladimir Putin.

“We have a lot of suspicions about Britain,” said Russian UK ambassador Yakovenko. “If you take the last 10 years, so many Russian citizens died here in the UK, under very strange circumstances … My question is why is it happening here?”

By Michael Holden and Andrey Ostroukh