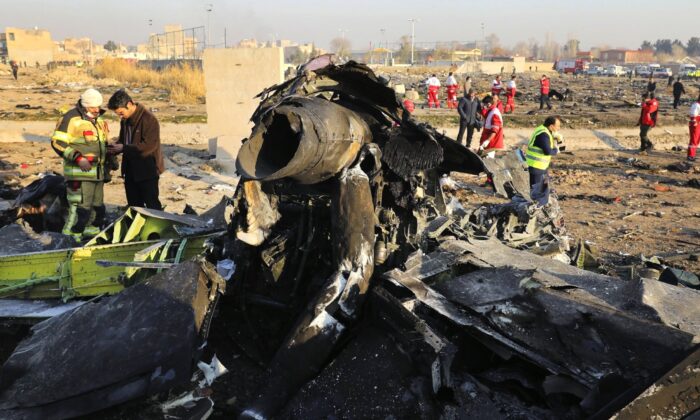 Debris at the scene where a Ukrainian plane crashed in Shahedshahr southwest of the capital Tehran, Iran on Jan. 8, 2020. (Ebrahim Noroozi/AP Photo)
Middle East

KIEV/DUBAI—A leaked audio recording of an Iranian pilot talking to the control tower in Tehran shows that Iran knew immediately it had shot down a Ukrainian airliner last month, despite denying it for days, Ukraine’s president Volodymyr Zelensky said.

On the recording, played on a Ukrainian television station late on Sunday, the pilot of another plane can be heard saying he saw “the light of a missile” in the sky before Ukrainian International Airways flight 752 crashed in an explosion.

Tehran blamed the Ukrainian authorities for leaking what it described as confidential evidence, and said it would no longer share material with Ukraine from the investigation into the crash.

All 176 people aboard the flight were killed when the plane crashed shortly after takeoff en route from Tehran to Kiev on Jan. 8.

The leaked audio “proves that the Iranian side knew from the start that our plane had been hit by a missile,” Zelensky said in a television interview.

“He says that ‘it seems to me that a missile is flying,’ he says it in both Persian and English, everything is fixed there,” Zelensky said.

After denying blame for three days, Iran acknowledged shooting the plane down, saying it had done so by mistake while under high alert, hours after it had fired at U.S. targets in retaliation for a U.S. strike that killed an Iranian general.

Iran has said it worked as quickly as possible to determine what happened to the plane. The Iranian commander who first acknowledged the plane had been shot down said he informed the authorities on the day of the crash.

Iran has faced pressure from Ukraine and other countries whose citizens were on board the flight to send evidence abroad for international investigations.

The Iranian official in charge of accident investigations at Iran’s Civil Aviation Organization called it a “strange move” by Ukraine to release the confidential recording.

“This action by the Ukrainians led to us not sharing any more evidence with them,” the official, Hassan Rezaifar said, according to the semi-official Mehr news agency.

In the recording, a pilot for Aseman, an Iranian airline, can be heard radioing the control tower that he has seen what he believes is a missile.

“Is this an active area? There’s lights like a missile. Is there anything?” the pilot says.

“Nothing has been reported to us. What’s the light like?” the controller replies. The pilot says, “It’s the light of a missile.”

The control tower can be heard trying and failing to raise the Ukrainian airliner on the radio. The pilot of the Iranian plane then says he has seen “an explosion. In a very big way, we saw it. I really don’t know what it was.”

Ukraine International Airways said in a statement the recording provided “yet more proof that the UIA airplane was shot down with a missile, and there were no restrictions or warnings from dispatchers of any risk to flights of civilian aircraft in the vicinity of the airport.”

Rezaifar, the Iranian aviation official, said in the Mehr report that the Ukraine investigation team, as well as all other foreigners involved in the investigation, have left Iran.

By Natalia Zinets and Babak Dehghanpisheh