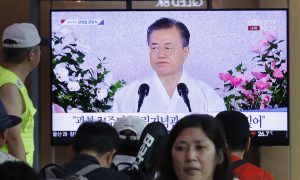 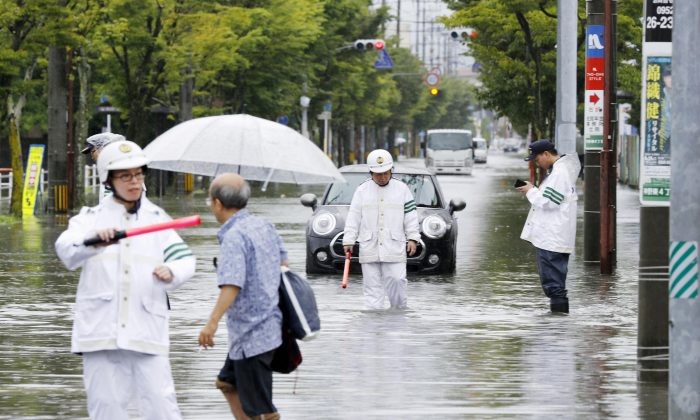 TOKYO—Torrential rain-triggered floods and landslides in Japan on Aug. 28, killing at least two people and prompting authorities to order more than 900,000 people to leave their homes while another million were advised to move to safety.

More than twice the usual rainfall for the whole of August has fallen over parts of the southern island of Kyushu over the past 48 hours, washing away roads, causing rivers to burst their banks and forcing the suspension of train services.

One man was killed when his car was swept away in Saga prefecture, while another man in Fukuoka prefecture died after being dragged away by flood waters when he got out of his stalled car, NHK national broadcaster said.

A woman in Saga was found without signs of life—a term Japanese authorities use to describe people yet to be officially confirmed as dead—in her car after it fell into a waterway.

“I woke up and the water was ankle-deep in my house, which has never happened before,” one man in an evacuation center told NHK.

“So I played it safe and evacuated early before things got any worse.”

Though authorities withdrew a warning of historically heavy rain by afternoon, it was expected to keep falling overnight, prompting additional warnings about flooding and landslides.

More than 900,000 people were ordered to evacuate, NHK said, while Japan’s Fire and Disaster Management Agency said just over a million others were advised to leave their homes.

“The first floor of our house is flooded and a total wreck, so we’re here on the second floor, awaiting rescue,” one person posted on Twitter.

“We can see the firemen out there moving around, but our street is such a mess they don’t seem to want to come in.”

The Ground Self Defense Force—Japan’s military—said it had deployed about 100 troops for disaster relief after a request from Saga prefecture.

Public transport and businesses were affected.

Toyota Motor Corp said it would suspend work on late on Aug. 28 at a factory in Kyushu that builds Lexus cars, while Daihatsu Motor said it would stop work at its factories in the region.