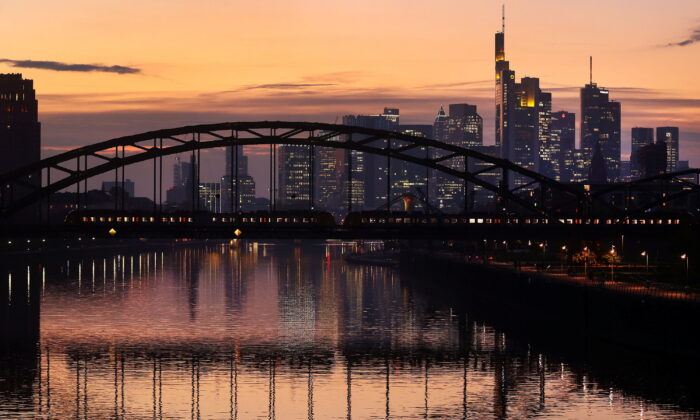 A commuter train passes by the skyline with its financial district in Frankfurt, Germany, on Oct. 25, 2021. (Kai Pfaffenbach/Reuters)
Gold and Commodities

BERLIN—German producer prices jumped at the fastest pace on record in July, underscoring the gloomy outlook for Europe’s largest economy, which is stuck in a stranglehold of soaring costs and weakening growth due to the Ukraine war.

Producer prices—a leading indicator for inflation—surged 37.2 percent on the year, the biggest rise since records began in 1949, the federal statistics office said on Friday. The month-on-month rise, 5.3 percent, was also the highest on record.

“The outlook for the further development [of the economy] is currently noticeably gloomy,” the finance ministry said in its August monthly report, published on Friday, adding that it was marked by “a high degree of uncertainty.”

The record increases in producer prices were primarily driven by skyrocketing energy prices, which as a whole were up 105 percent compared with the same month last year, the office said.

The German economy stagnated in the second quarter, with the war in Ukraine, soaring energy prices, the COVID-19 pandemic and supply disruptions bringing it to the edge of a downturn.

“The significantly lower gas supplies from Russia, the persistently high price increases for energy and, increasingly, other goods, as well as the longer-than-expected supply chain disruptions, also in connection with China’s zero-COVID policy, are weighing heavily on the economy’s development,” the finance ministry said.

Feeding into already high energy costs, the German government will impose levies on gas consumers from Oct. 1 that will add several hundred euros to the average family’s annual energy bill. To cushion the blow, sales taxes on gas are set to be reduced to 7 percent from 19 percent while the levies are in place.

Higher energy prices mean inflation is unlikely to cool off anytime soon: Germany’s annual inflation rate in July was 8.5 percent, in line with the wider eurozone’s record rate of 8.9 percent.

Experts expect German inflation could reach around 9 percent following the expiration of relief measures, including cheaper public transport and a fuel tax cut, at the end of August.

That is when inflation is likely to reach its peak, said Commerzbank economist Ralph Solveen. However, wage rises expected next year will likely continue to buoy rates, “and companies are likely to pass these costs on to their customers.”

The German government in April forecast 2022 inflation at 6.1 percent. It will present updated economic projections on Oct. 12, the finance ministry said.

By Miranda Murray and Paul Carrel