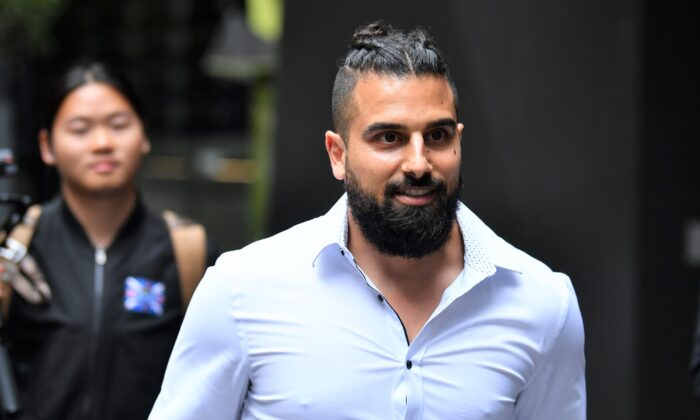 Australian journalist Avi Yemini was denied entry to New Zealand (NZ) by the immigration office while on his way to report on a protest in New Zealand’s capital on Aug. 23.

Immigration NZ told 1News that Yemini had failed to meet the “good character” test for immigration requirements due to a past criminal conviction.

“The onus is on the person to satisfy Immigration NZ that they meet all of the visa and entry requirements for New Zealand, including being of good character,” a spokesperson said.

According to the Immigration NZ website, a person fails to meet its good character requirements if they have a criminal conviction, have been deported from another country, or the organisation has reason to believe they are a risk to the country’s security, public order, or public interest.

“Where an individual does not meet character requirements, they should apply through the usual visa application process,” Immigration NZ said.

However, Yemini noted that Australian citizens are not required to obtain a visa to visit, work, and live in New Zealand.

“I didn’t break any of the regulations to get in. As an Australian citizen, you don’t need a visa waiver,” he told The Epoch Times.

Australians can be refused entry if they have been convicted of a criminal offence and served at least one year in jail within the last 10 years.

“The conviction that they were referring to was a fine. It’s the lowest form of any sort of [penalty],” Yemini said. “It doesn’t meet the threshold of refusing entry.”

Yemini said he was told over the phone by an immigration officer that she exercised the powers available to her to reject entry to the country after she deemed him not to have good character.

The officer told Yemini she had made the judgement after reading an article by the NZ Herald, which he described as a “smear campaign.”

“I asked them to give it to me in writing,” he said, explaining that to make an appeal, a phone call was not enough. “They refused to give me anything.”

Fellow Australian independent journalist Rukshan Fernando, known as The Real Rukshan, also had his passport flagged but was eventually allowed to board the plane to New Zealand.

Prime Minister Jacinda Ardern said she had no further information on the issue outside of what was released in public domain.

“And just to be absolutely clear, this is not something that, as I understand, would come up to a ministerial level decision,” she told reporters.

Yemini believes one reason he had been denied entry was because his work was a “threat” to the Ardern government.

“Is that information he’s putting out bad for our PR? … In short, [the answer is] yes,” he said.

“Yeah, they may be won in the short-term. But in the long-term, I think there’s a lot of New Zealanders that are very interested in what we’re doing now because they blocked us.”

Meanwhile, thousands of Kiwis have come out to protest in an organised demonstration around New Zealand’s parliament—locally known as the Beehive—in Wellington to criticise the Ardern government’s handling of the COVID-19 pandemic.

Wellington police closed off streets around Parliament and kept a close eye on the protest.

“The community can be reassured we are actively monitoring this event to ensure the protest activity is carried out in a safe manner for all involved, including members of the public, and disruption is kept to a minimum,” the Wellington District Police said on Facebook.

The protesters converged at Civic Square before marching to the Beehive. A smaller counter-protest group, numbered in the hundreds, also gathered near Parliament.

Protesters also held a mock court trial outside Parliament that found the government guilty of “crimes against humanity.”

Destiny Church leader and organiser of the protest Brian Tamaki, told the demonstrators that he had seen his country go “down the gurgler.”

The Wellington Police said they believed there were around 1,500 attendees to the protest, although alternative sources from Wellington City Council told Stuff.co there were at least 2000 protestors.

The police also noted they were “very pleased” with how people conducted themselves after the event ended.

“The group was monitored closely by police, and there were no reported issues,” they wrote in another Facebook post.