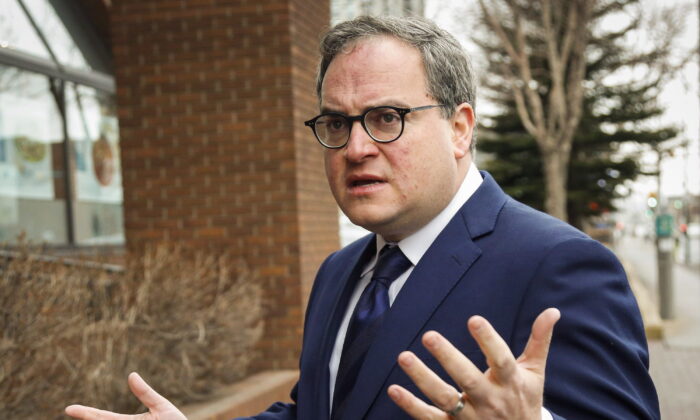 Rebel News Network is asking a court to quash $3,000 worth of fines levied against the right-wing media outlet by the commissioner of elections.

The fines were imposed earlier this year after an investigation by the commissioner’s office into thousands of lawn signs erected by Rebel News during the 2019 federal election campaign ostensibly to promote a new book by Rebel founder Ezra Levant.

The signs urged people to buy the book, entitled “The Libranos: What the media won’t tell you about Justin Trudeau’s corruption.”

The signs featured the book’s cover art–a drawing of Liberal Prime Minister Justin Trudeau, surrounded by some ministers and top advisers, that was made to resemble promotional art for “The Sopranos,” the popular early-2000s television show about the mafia.

Elections commissioner Yves Côté concluded that the lawn signs constituted election advertising since they were clearly intended to oppose a registered party and its leader in the midst of the campaign.

However, in an application to the Federal Court for judicial review of the fines, Rebel News Network argues that Côté has incorrectly applied the law regarding third-party advertising, which specifically exempts the promotion of a book that “was planned to be made available to the public regardless of whether there was to be an election.”

Moreover, it argues that the book exemption itself is “vague, ambiguous, and overbroad” and imposes an unconstitutional limit on free speech guarantees in the Charter of Rights and Freedoms.

“By suppressing and chilling legitimate expression, the book exemption undermines the democratic election process in the name of protecting it,” Rebel says in the application.

“Censoring political debate by intruding into a protected sphere of expression in the name of electoral integrity undermines the freedoms of belief, opinion, and expression without practical benefit.”

According to the application, a report last January by the elections commissioner’s compliance unit concluded that the book exemption did not apply in this case because “it seems clear the entire project was planned and executed in order to coincide with the 43rd general election.”

The report noted that Rebel News had promoted distribution of the lawn signs on Twitter using the hashtag #elxn43 and had also referenced them in a video outlining the outlet’s plans for the federal election campaign.

“Finally, lawn signs are not a usual method of promoting a book. They are, however, a staple of election campaigns,” the report said.

In a subsequent notice of violation sent to the outlet in January, the commissioner’s office also said that Rebel News’ director “admitted that the book’s launch had been timed to coincide with the general election.”

It also said investigators found that thousands of lawn signs had been distributed and that Rebel had solicited donations to cover $15,000 in production costs and another $25,000 for salary and travel expenses for two individuals “hired to drive across the country to distribute them.”

Under law, a third party is required to register immediately after incurring $500 in election-related expenses.

Rebel News argues in the application that the promotion of Levant’s book “fell squarely” under the book exemption, that the book was “planned well before a fixed election date and would be released whether there would be (an) election or not.”

It contends that Côté misapplied the law, focusing on whether the book launch was timed to coincide with the election, not whether it would have been published regardless of the election.

The outlet further argues that Côté failed to exercise his discretion in balancing the application of the law with the need to protect fundamental rights and freedoms.

In any event, it maintains the book exemption is unconstitutional, empowering “the state to punish individuals for exercising their freedom to express and share information, opinions, and beliefs during federal election campaigns.”

“Timing a book for an election-cycle release is standard marketing strategy in the publishing industry,” the application argues.

Whether it would have been released regardless of an election “is, in practice, unknowable,” it adds.

No court date has been scheduled to hear Rebel’s application.

A lawyer for Rebel News referred to the court documents.

In the meantime, Veronique Aupry, spokeswoman for Côté’s office, said the commissioner is not requiring Rebel News to pay the fines “because the decision is under review before the Federal Court.”