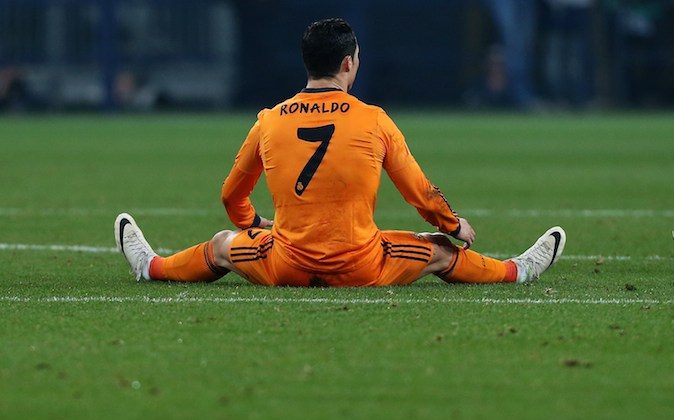 Real Madrid's Portuguese forward Cristiano Ronaldo sits on the pitch during the first-leg round of 16 UEFA Champions League football match Schalke 04 vs Real Madrid in Gelsenkirchen, western Germany on February 26, 2014. Real Madrid cruised to a rare victory on German soil as they romped to a 6-1 win at Schalke 04 in Wednesday's Champions League's last 16, first-leg clash. (RONNY HARTMANN/AFP/Getty Images)
Soccer

The game will be broadcast on TV3 in Spain.

The game will also air on Sky Go in Germany.

In the United States, the game will be shown on TV3, Fox Soccer Plus, Fox Deportes, and Fox Sports 2 USA.

5 Things to Know About Schalke’s Visit to Madrid

MADRID— Holding a 6-1 lead from the first leg, Real Madrid can finish off its one-sided Champions League series with Schalke on Tuesday.

Madrid’s attacking firepower was on display in the lopsided win in Gelsenkirchen, with Cristiano Ronaldo, Gareth Bale and Karim Benzema leading the way.

Benzema, however, will be unavailable for the return match in the Spanish capital.

Here are five things to know about the match at the Santiago Bernabeu Stadium:

Real Madrid striker Karim Benzema will not play against Schalke after limping off with a right leg problem in Saturday’s 1-0 victory at Malaga.

Benzema is enjoying one of his most productive campaigns at Madrid, with 21 goals in all competitions, but coach Carlo Ancelotti said on Monday he will not risk his first-choice striker with a crucial Spanish league match with Barcelona looming on Sunday.

Ronaldo has netted 11 goals in the Champions League this season, leaving him three shy of matching the record 14 scored by Barcelona rival Lionel Messi in the current format of the competition.

The generous advantage secured by Madrid means coach Carlo Ancelotti can rotate his squad, and that will give some fringe players an opportunity heading into the final stretch of the season.

Holding midfielder Asier Illarramendi could get a rare start, while the Italian coach confirmed on Monday that Alvaro Morata, Jese Rodriguez and Isco will accompany Ronaldo in attack, meaning Gareth Bale will be on the bench.

“I’ve trained a lot of quality teams so it’s hard to compare,” Ancelotti said when asked if his current squad was the best he had coached. “This team has experience, youth, quality, personality. It might be one of the most complete squads I’ve ever coached.”

Despite being routed by Madrid in the first leg, Schalke has moved up to third in the Bundesliga since the winter break.

“Unfortunately, the 6-1 has pushed our good season into the background,” Schalke captain Benedik Hoewedes said. “That’s why we want to leave a good impression in our last outing in the competition.”

Schalke striker Klaas-Jan Huntelaar has returned from a knee injury and scored nine goals in 10 appearances this season, which is one more than he scored in 20 games while playing for Madrid five seasons ago.

But the Netherlands striker may not even come up against his former club despite scoring the lone goal in the first leg as coach Jens Keller could rest him with a showdown against second-place Borussia Dortmund coming up.

Schalke must finish in the top three to clinch a direct spot into next season’s Champions League.