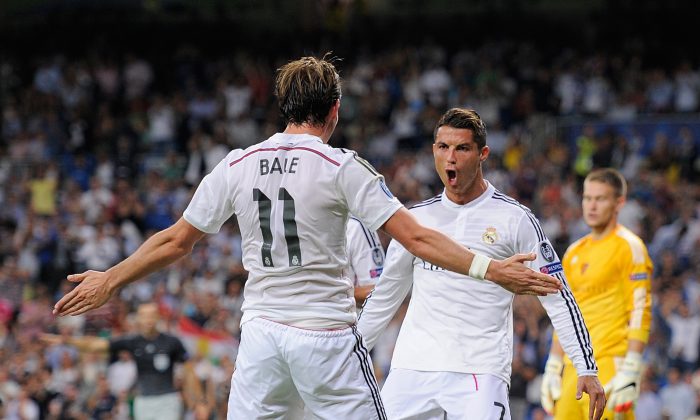 Real Madrid and Deportivo La Coruna are set to play in a La Liga match on Saturday, September 20.

The game will be broadcast on C+ Liga Multi, GOL T, and Canal+ Yomvi in Spain.

Real Madrid are 3/10 to win the match, as compared to 11/1 for Deportivo according to OddsChecker.

See an AP preview below.

MADRID (AP) — Real Madrid finally got its act together in the Champions League, and now it’s time to keep the momentum rolling into the domestic competition following a disappointing start.

Madrid won its 10th European title last season and routed FC Basel 5-1 on Tuesday, but started this year’sSpanish league with only one win from three matches. On Saturday, the team will get a chance to double their point total when they play at Deportivo La Coruna.

Barcelona, which beat Cypriot club APOEL 1-0 on Wednesday, will travel to Levante looking to maintain its perfect start.

Here are some things to know about this week’s matches in the Spanish league:

Madrid recovered its swagger against Basel as both Cristiano Ronaldo and Gareth Bale scored to help the team get started with a convincing victory.

With Deportivo waiting on Saturday, Madrid coach Carlo Ancelotti will be hoping Bale and former Tottenham teammate Luka Modric continue to link up and keep feeding the front line.

They also lost Mario Mandzukic, at least for a little while.

The Croatia striker is expected to miss Saturday’s match against Celta Vigo, and likely more, after breaking his nose following an elbow from Pajtim Kasami.

Atletico will also be without coach Diego Simeone, who is still serving an eight-match ban.

Barcelona is already at the top of the league and boasts superstar scorers in Lionel Messi and Neymar. But La Masia graduate Munir El Haddadi is also making a mark in the team and will be looking for more goals when Barcelona visits Levante on Sunday.

The 19-year-old Spaniard scored on his league debut against Elche and has wowed fans at the Camp Nou with his deadly instincts, athletic prowess and ball skills combined with a tactical ability to outfox opponents.

Even after the slow start in the league, Madrid coach Carlo Ancelotti seems to be sticking with goalkeeper Iker Casillas.

The Spain captain was jeered at times during the team’s 5-1 win over Basel, and many fans blame him for the club’s listless start in the league.

“I look at what the goalkeeper does on the field, and I liked what I saw,” Ancelotti said.

“People should also be sensitive,” Ramos said. “The whistling affects him.”