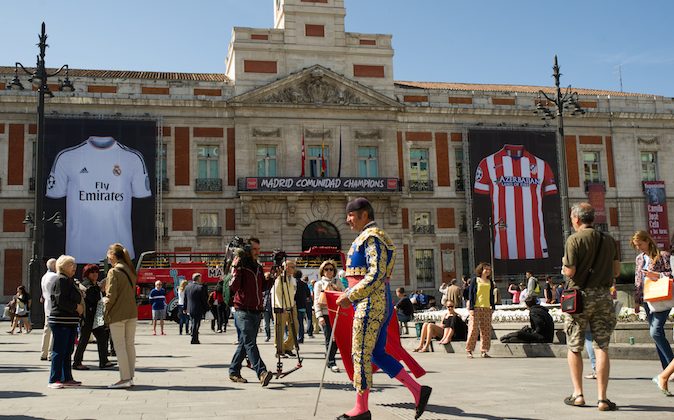 Real Madrid CF and Club Atletico de Madrid shirt banners hang from the regional Madrid government building at Puerta del Sol square on May 14, 2014 in Madrid, Spain. Preparations are being made ahead of the all-Madrid UEFA Champions League final on May 24 in Lisbon. (Photo by Denis Doyle/Getty Images)
Soccer

The Real Madrid vs Atletico Madrid UEFA Champions League final is set for Saturday, May 24.

The game will be broadcast on TVI and Sport TV LIVE in Portugal.

The game will also air on C+ Liga de Campeones/HD and TVE in Spain.

In the United States, the game will be shown on FOX Network, Fox Deportes, and Fox Sports GO

Live stream is available on TV3 and Fox Soccer 2Go.

LISBON, Portugal— For Atletico Madrid, the only thing in the way of the greatest season in the club’s 111-year history is crosstown archrival Real Madrid.

The Spanish rivals make up the first intracity Champions League final in history, with the match to be played in Lisbon.

Real Madrid is the competition’s most successful club and bidding to end a 12-year wait for “La Decima” — its 10th European Cup title. It recently had a 14-year unbeaten run against Atletico in all competitions come to an end last season, when Atletico won the Copa del Rey at Real’s Santiago Bernabeu Stadium.

Here are five things to know about Saturday’s match:

Ronaldo has been burdened by leg injuries over the past two months but said Tuesday he would be available to play in his first Champions League final for Madrid. Costa has also endured leg setbacks and, after hobbling off against Barcelona on Saturday, sought treatment from a specialist in Belgrade using horse placenta.

Ronaldo’s return will bolster Madrid’s already potent attack with Gareth Bale set to start. But striker Karim Benzema appears to be doubtful with a hamstring injury. Madrid center back Pepe is also a game-time decision.

The Spain international has been one of Madrid coach Carlo Ancelotti’s most important players this season, but a yellow card in the semifinal win over Bayern Munich has left him suspended.

Either Sami Khedira, Asier Illarramendi or Casamiro is likely to fill the void and take responsibility for opening up Madrid’s attack and breaking up Atletico’s buildups.

Illaramendi is the natural successor to Alonso, but he has had a nervy debut season at Madrid.

“It will be a very equal match and I imagine the midfield will be determinant in setting up play,” Atletico coach Diego Simeone said.

VILLA EXPERIENCE: Not only will David Villa’s goal-scoring prowess make up for Diego Costa’s absence, but the Spain striker’s experience should prove invaluable to an Atletico team short of Champions League experience.

Villa is the only regular in the squad who has played in a Champions League final before, scoring in Barcelona’s 3-1 triumph over Manchester United at Wembley Stadium in 2011.

Costa’s absence could also bolster Villa’s hopes of playing for Spain at the World Cup.

Madrid can count on more experience as Cristiano Ronaldo won the title while at Manchester United and goalkeeper Iker Casillas was part of Madrid’s winning teams in 2000 and ’02.

Madrid can also draw on the experience of assistant coach Zinedine Zidane, who scored an iconic goal in Madrid’s 2-1 win over Bayer Leverkusen in its last Champions League final appearance.

PAISLEY’S RECORD: Carlo Ancelotti has been able to get Real Madrid where Jose Mourinho never could, and now the Italian coach is one win away from matching Bob Paisley with his third European Cup.

Ancelotti, who also won two European Cups as a player, secured the Champions League at AC Milan in 2003 and ’07, leaving him on the verge of matching the former Liverpool manager’s record number of titles.

“There’s no pressure on me, just the joy of living this moment of happiness,” Ancelotti said. “A lot of (teams) have to watch this game in front of the TV and we’re lucky to be able to play it. I’ve watched this game on TV a lot of times and I didn’t enjoy it.”

Diego Simeone could become just the third non-European coach to win the trophy. The only other two were also Argentine — Real Madrid’s Luis Carniglia in 1958 and ’59 and Helenio Herrera of Inter Milan in 1964 and ’65.

Madrid has the advantage with 102 victories to Atletico’s 46. Atletico only ended a 14-year winless run against Madrid in all competitions last season when it won the Copa del Rey at the Santiago Bernabeu Stadium.

Atletico has won and drawn the two league encounters since, while Madrid easily won a pair of Copa del Rey matches against Atletico en route to the domestic cup title.

The pair have met in the European Cup once before — in 1959, when Madrid needed a replay to emerge victorious.

After the two legs finished 2-2, Madrid won 2-1 in Zaragoza to reach the final. But in one-game cup finals, Atletico — which can become the seventh team to finish the competition undefeated — leads the series 4-1.

“There are no secrets for this game,” Ancelotti said. “The two teams know each other well.”