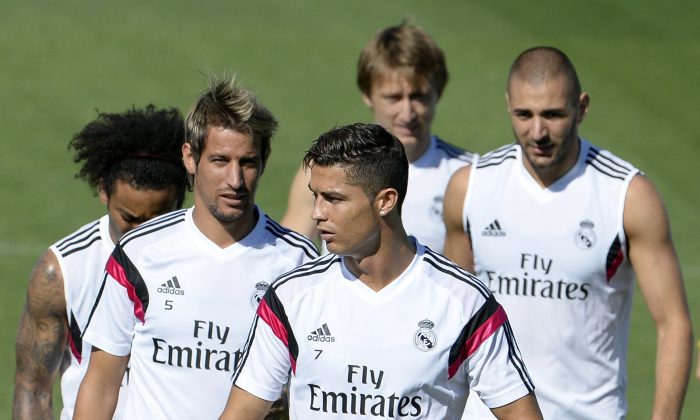 Real Madrid and Atletico Madrid are set to play in a La Liga match on Saturday, September 13.

In the United States, the game will be shown on beIN Sports en Español and beIN Sports USA.

Real are 8/11 to win the match, as compared to 9/2 for Atletico, according to OddsChecker.

See an AP preview of the La Liga games this weekend.

MADRID (AP) — The Madrid derby is coming, and Atletico coach Diego Simeone is going to miss it.

Simeone is still serving an eight-match touchline ban after being sent off during the second leg of the SpanishSuper Cup for a vehement protest that included tapping an assistant referee on the head.

Atletico beat Real Madrid to win the season-opening title, only a few months after Madrid beat Atletico to win the Champions League final. The two teams will play each other again on Saturday at the Santiago Bernabeu Stadium.

Here are some things to know about this week’s matches in the Spanish league:

Real Madrid already lost the Spanish Super Cup to Atletico, and now finds itself in 10th place in the league after only two matches ahead of another derby.

Although Atletico will be without Simeone, he has emphasizing to his players that they are unbeaten in three of their last four matches at the Bernabeu.

Karim Benzema has been Madrid’s default striker, but the arrival of Javier “Chicarito” Hernandez from Manchester United creates competition for that spot.

Mainly a substitute at United, Hernandez is eager to make his mark. The 26-year-old Mexican said he has learned from waiting to come on for Wayne Rooney, Robin van Persie and Dimitar Berbatov.

“I’ll bust my soul and kill for this jersey,” Hernandez said.

Lionel Messi is two goals away from 400 for both club and country, and he could reach that mark on Saturday against Athletic Bilbao.

The 27-year-old Argentine, who has scored 245 league goals, has recovered from a groin injury sustained in Barcelona’s 1-0 win at Villarreal.

Barcelona has won its last 10 home league matches against Bilbao.

Bilbao, however, is on a high after reaching the group stage of the Champions League by beating Napoli. In theSpanish league, the Basque team opened with a loss at Malaga but rebounded with a 3-0 win over Levante.

Ronaldo missed the loss at Real Sociedad and also sat out Portugal’s European Championship qualifying loss to Albania on Sunday, but has been training.

The Ballon d’Or winner has been slowly recovering from a left-leg injury that hindered him at the World Cup in Brazil.

Ronaldo was ruled unfit to play against Albania by the Portuguese football federation’s medical department.