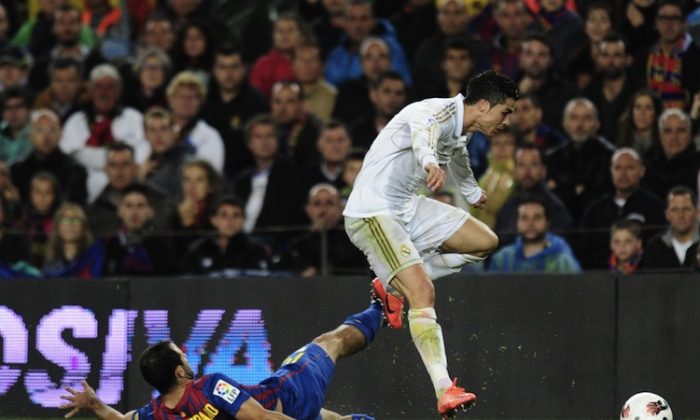 Real Madrid took a major step toward sealing their first Spanish Primera League title since 2008 with a 2–1 victory over Barcelona at the Camp Nou on Saturday. Madrid now has a seven-point lead with four games left to be played in La Liga.

Cristiano Ronaldo scored the winning goal just three minutes after Barcelona had tied the game in the second half.

Arguably the two strongest clubs in European football are in the midst of an intense week with the “El Clasico” match sandwiched in between their Champions League semifinal legs. Both sides were coming off losses; Real Madrid lost in Munich to Bayern, while Barcelona lost in London to Chelsea.

Real Madrid have drawn three of their last seven matches, which allowed Barcelona to close the gap to four points at the start of the match. The hosts had won their last 11 La Liga matches to put the pressure on Real Madrid.

Interestingly, Real Madrid went with the same starting XI as the one that lost in Munich last Tuesday in the Champions League semifinal first leg.

German Sami Khedira gave Madrid a deserved lead in the 17th minute when he knocked home a loose ball from Carles Puyol. Barcelona goalkeeper Victor Valdes could only get a palm on Pepe’s header from an Angel Di Maria corner. Valdes was caught in no-man’s land and once again Real Madrid made him pay.

Barcelona’s best chance of the first half came in the 27th minute when Lionel Messi, surrounded by five Madrid players, snuck a pass to Xavi who went in one-on-one with Iker Casillas. The Madrid keeper managed to deflect it slightly with his hip and the ball narrowly missed the far side of the goal.

The rain picked up in the second half. Barcelona re-established its possession game, trying to break through a compact Madrid defense. Barca found one such opening when Thiago picked out the youngster Cristian Tello on the left but he skied his side-footer. A bit more composure from Tello could’ve yielded a goal for the hosts.

The second half roared to life when Barcelona got on the scoreboard in the 70th minute. Alexis Sanchez managed to jab the ball past Casillas while falling down after it had pinballed in the Real Madrid area. This time Tello made good use of his ball from the left in the buildup to the goal.

But Real Madrid were not to be denied—just three minutes later, Mesut Ozil played a perfect ball into the stride of Ronaldo who raced in on Valdes and scored with a right-footer.

Ronaldo, who hadn’t always performed in the biggest games, came through with the decisive goal after what had been a fairly quiet game by his standards.

Real Madrid has come a long way versus Barcelona. From being frustrated and reacting negatively to Barcelona’s lopsided victories, Jose Mourinho has now guided his side to what should be the Spanish Primera League title, barring an extraordinary collapse.

After an intense El Clasico, Real Madrid and Barcelona will turn their attention once again to the Champions League with a hope of having another El Clasico in Munich, which would be bigger than any other this season.