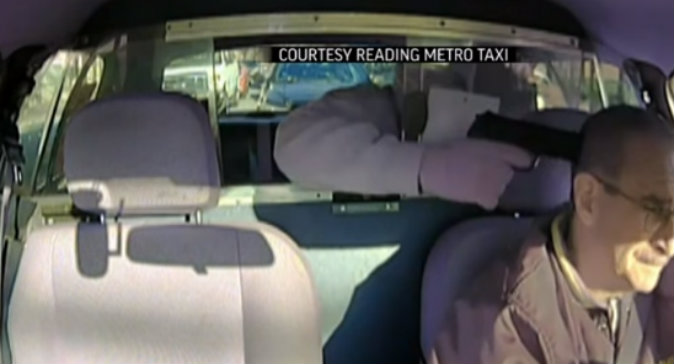 A masked man tried to rob his cab driver in Pennsylvania, but he should’ve looked behind him first, because a sheriff’s deputy was watching the whole thing.

Berks County Deputy Sheriff Terry Ely was waiting behind the car, after becoming suspicious when the vehicle failed to move as the traffic light turned green multiple times.

Cameras inside the car captured a man, later identified as 18-year-old Victor Martinez-Herrera, telling driver Ralph Valletta: “Give me all your money man! Give me everything you got!”

I almost had a heart attack in the car … You know, when that gun’s pointed at your head, your body is doing things.

Martinez-Herrera appears to point a pistol at the driver’s head.

“All hell broke loose,” Valletta told WFMZ. “The gun came out at my head. He was screaming at me. He had his hoodie pulled down and I couldn’t see anything but his eyes.”

Valletta hands Martinez-Herrera $11, telling him he has no more because he just started his shift.

That’s when deputy Ely walked up.

“When he approached the vehicle he heard yelling,” Sheriff Eric J. Weaknecht told Fox8. “The deputy saw the defendant in the back seat with a handful of money, he couldn’t see the gun at first.”

Martinez-Herrera yelled “fake gun” and put his hands up, complying with Ely’s orders to get on the ground.

After the arrest, Ely told Valletta to get a cup of coffee and go home.

“His response was, ‘I can’t go home. I have bills to pay and I have calls to take,'” he said. “To see someone that’s just out there trying to work hard to make and to be victimized like that, my concern was all for him.”

Valletta said later, recounting what happened: “I almost had a heart attack in the car. My heart was beating. You know, when that gun’s pointed at your head, your body is doing things.”