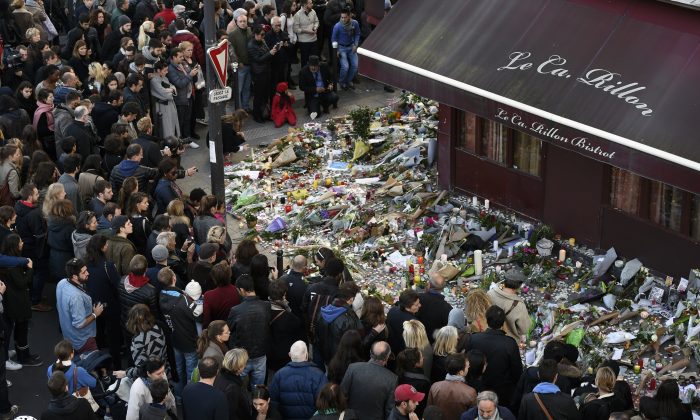 People gather at a makeshift memorial in front of "Le carillon" restaurant on Nov. 16, in the 10th district of Paris, following a series of coordinated terrorists attacks on Nov. 13. (Alain Jocard/AFP/Getty Images)
US

WASHINGTON—The Paris terrorist attack on Nov. 13 demonstrated that ISIS could reach beyond the Middle East to a capital of a Western democracy. The attack has triggered an intense controversy in the United States on the admission of refugees from the Middle East.

ISIS took credit for the simultaneous attacks that killed 130 and wounded 300 plus, including one American. One of the slain terrorists possessed what was probably a fake Syrian passport and had used the cover of an immigrant among the thousands fleeing to Europe from the conflict in Syria.

“In light of the Paris attack in Paris, I call on you to temporarily suspend the admission of all additional refugees into the United States pending a full review of the Syrian refugee resettlement program …, wrote Rep. Michael T. McCaul (R-Texas), chairman of the House Homeland Security Committee, in a letter, dated Nov. 16, addressed to President Obama. McCaul states that a real risk exists that “terrorist groups will attempt to exploit the refugee resettlement program in order to gain entry into our country.”

The House of Representatives passed, on Nov. 19, the American Security Against Foreign Enemies Act of 2015, which would compel additional steps in the process of vetting a refugee for admission to the United States. The nation’s top security officials—the Secretary of Homeland Security, the Director of the FBI, and the Director of National Intelligence—will have to certify any Syrian or Iraqi refugee, who has already passed the rigorous screening for admission to the United States, does not represent a security threat.

The vote was 289 to 137, which would be sufficient to override a presidential veto. It awaits action in the U.S. Senate.

Immigrant advocates opposing these additional steps say that there are already a lot a layers of screening that preclude any refugee terrorist from setting foot on U.S. territory and will only further delay what is currently an 18 to 24 month process, and could prevent Syrian refugees from coming to our shores at all.

The war in Syria has created an unprecedented humanitarian crisis. Half of Syria’s population, or nearly 11 million fleeing civil war and ISIL, has been “displaced”—forced from their homes. Over four million of them have fled their homeland and become refugees in Jordan, Turkey, Iraq, Egypt, and elsewhere in the Middle East.

We have seen on the evening news the Syrian and other Middle East refugees in Turkey crossing the Aegean Sea in inflated rubber dinghies or walking across Serbia and Hungary to reach Europe, which now faces its worst refugee crisis since World War II.

“Resettlement [in the U.S.] is offered to refugees who are among the most vulnerable—people for whom a return to Syria someday would be extremely difficult, if not impossible, such as victims of torture, burn victims, or others with chronic medical conditions,” testified Anne Richard, assistant secretary for Bureau of Population, Refugees, and Migration (PRM), on Nov. 19, before a subcommittee of the House Judiciary Committee.

[If we refuse to take 10,000 Syrian refugees] we are signaling that we are not part of the world community and not taking leadership.
— Kevin Appleby, U.S. Conference of Catholic Bishops

Richard said that President Obama determined for FY 2016 the overall number of refugees allowed to come to the United States for permanent resettlement at 85,000, including at least 10,000 Syrians. That is up from the nearly 70,000 refugees of 67 different nationalities, including 1,700 Syrians, who were admitted in FY 2015.

Thus, the Administration, which wants to broaden the program of resettlement, is at odds with the House of Representatives as well as the Republican presidential hopefuls who want to pause the program.

The issue has foreign policy implications in addition to the humanitarian concerns, said Kevin Appleby, representing the U.S. Conference of Catholic Bishops, which is one of the nine resettlement agencies in the United States that provides resettlement assistance to arriving refugees.

Appleby said at a Capitol Hill briefing on Nov. 23 that the United States is being asked to share the burden of Syrian refugees overflowing in Lebanon (over one million), Jordan (700,000), and Turkey (1.5 million). If we refuse to take 10,000 Syrian refugees, “we are signaling that we are not part of the world community and not taking leadership.”

Given the concerns and fears of some in the wake of the Paris terrorist attacks, what is involved in admitting refugees and Syrians specifically into the United States? What security procedures and background checks are in place in the U.S. refugee resettlement process?

The following account is a quick sketch of how a refugee is scrutinized and screened prior to receiving permanent resettlement status in the United States.

The first step begins with the United Nations High Commissioner for Refugees (UNHCR), which registers all refugees.

“Registration includes recording, verifying, and updating of biographic and biometric information on people of concern and determining the amount of humanitarian and other help needed,” said Tiffany Lynch, from the U.S. Commission on International Religious Freedom, at a Capitol Hill briefing on Nov. 23. She said that the UNHCR identifies the specific needs and vulnerabilities of the individual.

UNHCR refers individuals and families who could benefit the most from resettlement in the United States to the U.S. Refugee Admissions Program (USRAP). It is important to understand that refugees do not volunteer or apply to the United States; UNHCR recommends them to the USRAP for resettlement.

“As of late September 2015, the USRAP has received approximately 19,000 referrals of Syrian applicants from UNHCR, primarily in Turkey, Jordan, and Egypt. The USRAP continues to interview large numbers of Iraqi applicants in these same three locations,” said Leon Rodriguez, director of U.S. Citizenship and Immigration Services (USCIS) at the House Judiciary hearing cited above.

USRAP is an interagency effort involving government agencies and NGOs collaborating overseas and in the United States. The Department of State has overall coordination and management of USRAP. The U.S. Citizenship and Immigration Services (USCIS), which is within the Department of Homeland Security (DHS), is responsible for conducting individual interviews with applicants to determine their eligibility for refugee status. Basically, USCIS has the responsibility for “adjudicating applications for refugee status,” states the USCIS website.

Only 2 percent of the entire people the U.S. has received of the Syrian refugees was actually an unattached male of the military age.
— —Jenny Yang, vice president, Advocacy and Policy at World Relief

“All available biographic and biometric information is vetted against a broad array of law enforcement, intelligence community, and other relevant databases to help confirm a refugee applicant’s identity, check for any criminal or other derogatory information, and identify information that could inform lines of questioning during the interview,” Rodriguez said.

Name checks as well as aliases are carried out using the CLASS (Consular Lookout and Support System) database. It contains information on persons such as visa refusals, immigration violations, criminal histories, and terrorism concerns. Besides DOS sources, numerous agencies feed into this database.

For groups and nationalities designated by the U.S. government as requiring a higher level check, DOS uses the Security Advisory Opinion (SAOs), which is a biographic check conducted by the FBI. A third biographic check, Interagency Checks (IACs) began in 2008 for Iraqi refugees, “but the IAC is now required for all refugee applicants within a designated age range, regardless of nationality,” said Rodriguez. IAC is maintained by the National Counterterrorism Center (NCTC).

USCIS collects fingerprints and begins biometric checks. USCIS draws from the FBI, DHS, and Department of Defense (DoD) for biometric record data. These checks pertain to criminal history, immigration violations, law enforcement and national security concerns, and more. DOD provides the Automated Biometric Identification System (ABIS), which contains a variety of records, including fingerprints captured in the theatre of Iraq.

One can’t over emphasize the importance of the lengthy USCIS refugee interview in the screening process. USCIS officers are highly trained in refugee law and fraud detection. Before deploying overseas, officers receive additional training on the specific population where the refugees whom they will be interviewing originate.

Too Risky or Not

All in all, it’s an impressive system for vetting refugees seeking resettlement in the United States, and this summary left out many details.

We can query our databases until the cows come home, but nothing will show up [if] we have no record of [a refugee seeking admission to the U.S.]
— James Comey, director, FBI

The critics say, however, these biographic and biometric checks are only as good as the databases they depend upon. Chairman McCaul, wrote in the aforementioned letter to the president that the directors of the National Counterterrorism Center (NCTC) and the FBI, and the Secretary of DHS have testified before his committee that we lack on-the-ground intelligence necessary to thoroughly vet Syrian refugees.

FBI Director James Comey testified at the Oct. 21 Homeland Security Committee hearing, “…if someone has not made a ripple in the pond in Syria in a way that would get their identity or their interests reflected in our databases, we can query our databases until the cows come home, but nothing will show up because we have no record of that person.”

In the final analysis, the Syrian refugee vetting result may have to rely most on the extensive RSC and USCIS interviews for detecting terrorists.

No program is ever going to be entirely risk free, but proponents of the president’s plan point out how much the U.S. program seeks to admit those who are particularly vulnerable. “Only 2 percent of the entire people the U.S. has received of the Syrian refugees [from previous years] was actually an unattached male of the military age,” said Jenny Yang, vice president, Advocacy and Policy at World Relief, a resettlement agency, at the Capitol Hill briefing.