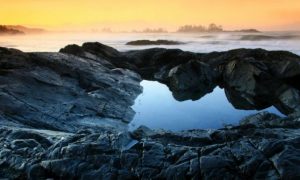 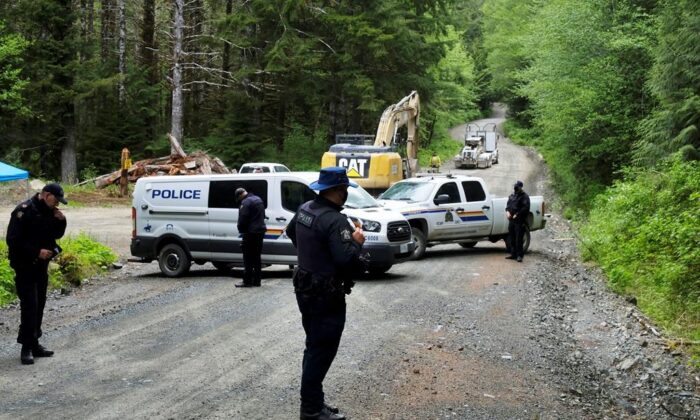 An excavator works in the background as police establish a checkpoint on McClure Main in the Caycuse area on B.C.'s Vancouver Island, on May 17, 2021. (Jen Osborne/The Canadian Press)
Canada

PORT RENFREW, B.C.—An RCMP spokesman says there will be “police action” today as Mounties enforce a court injunction against an anti−logging blockade on southern Vancouver Island.

The RCMP announced Monday that they are temporarily controlling access to the Fairy Creek Watershed northeast of Port Renfrew, enforcing the April 1 injunction that allows Teal-Cedar Products to start logging activities.

The Rainforest Flying Squad, whose members are among those opposed to the harvest, say they were given 24 hours to leave the controlled area or face arrest.

The protesters have been maintaining multiple camps around Fairy Creek, as well as at cutblocks in the Caycuse area west of Cowichan Lake.

The Mounties have set up a checkpoint along a forest service road leading to the Caycuse camp and about two dozen police vehicles moved past it earlier today.

RCMP Const. Alex Berube says “police action” will occur, but a “measured” approach will be used so no one is hurt.

He says the police vehicles and other RCMP preparations are to ensure officers are adequately prepared.

Teal Jones vice-president Gerrie Kotze has said logging plans for the Fairy Creek watershed have been “mischaracterized” because trees can’t be cut in most of it. Harvesting is only planned for a small area far from the San Juan River, he said last month.

Opponents of logging say the watershed is one of the last unprotected, intact, old-growth forests on southern Vancouver Island.