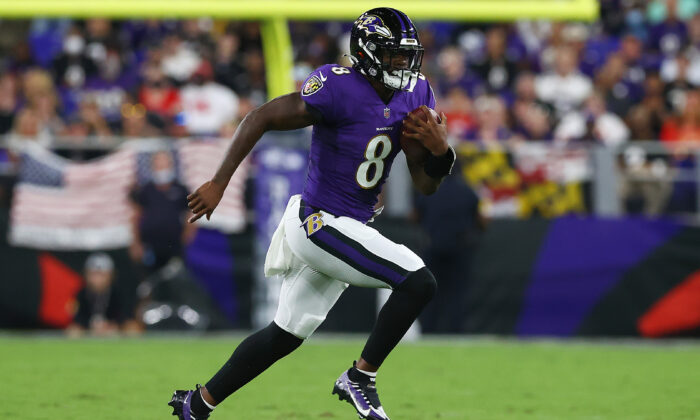 Lamar Jackson #8 of the Baltimore Ravens scrambles with the ball against the Kansas City Chiefs during the second quarter at M& T Bank Stadium, in Baltimore, Md., on Sept. 19, 2021. (Todd Olszewski/Getty Images)
NFL

BALTIMORE, Maryland—From a deficit of 19 points late in the third quarter, Lamar Jackson brought the Baltimore Ravens to a comeback overtime victory, 31–25, over the Indianapolis Colts on Oct. 11. It was another Monday Night Football instant classic with career-high performances.

Jackson had a career-high 442 yards passing on 37 of 43 attempts. He threw four touchdowns without an interception. Known as a dual throwing and running threat, he also led the Raven rushing with 62 yards. When he is leading the rushing stats, that is usually an indicator that the team is not rushing well overall.

The Ravens had tied the NFL record for the most consecutive 100-yard rushing games at 43. The record would likely be broken against the 1–3 Colts. The Colts’ defense however stumped the Ravens’ attack through nearly three quarters and held the Ravens to 86 yards rushing. With the Colts leading 16–3 in the third quarter, Jackson led an 88-yard drive to the Colts’ 1-yard line. However, the Colts stopped Jackson by forcing him to fumble.

So Jackson had to have a career game to rally from a 25–9 fourth-quarter deficit. Their total net yards for the game was 523. Ravens coach John Harbaugh said following the game, “It was one of the greatest performances I’ve ever seen.”

Jackson added, “To be honest, it wasn’t a doubt in my mind. Our team, we hit that peak that we needed at the right time in the second half. We just knew it was one play at a time … That’s all we kept saying in the huddle.” His two main receiving targets were Marquis Brown and Mark Andrews.

Ravens tight end, Andrews, also had a career game with 11 catches for 147 yards and two touchdowns. He dedicated his performance to his grandmother. “My grandma passed this week and I wanted to play for her,” he said. “I was sad I wasn’t able to be there for her, but she means a lot to me. Growing up, she lived like a block away. I’d ride to her house, and all of our family is praying for her. I was glad I was able to play for her. She’s the biggest Ravens fan ever. She looked up every article y’all have ever written. I know she’s looking down on me watching, and I’m extremely blessed to have had her in my life.”

The Ravens defense also stepped up by shutting out the Colts in the fourth quarter. Calais Campbell was able to block the Colts’ field goal attempt at the end of regulation time. The Ravens defense had stopped the Colts near mid-field at the end of the game. But a personal foul penalty after the third-down stop, against Tavon Young, gifted the Colts a first down. This was an enormous mistake at this juncture as Young retaliated against a Colts receiver for pushing him after the play. Campbell’s block came on the most important defensive play and kept the Ravens in the game. Next up, the Ravens host the Los Angeles Chargers on Sunday at 1 p.m. ET.

Notably, Colts quarterback Carson Wentz also had an impressive game. He completed 25 of 32 passes for 402 yards and two touchdowns. Colts’ next opponent is the Houston Texans, both bringing 1–4 records, on Sunday at 1 p.m. ET.