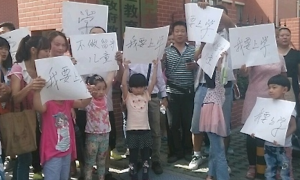 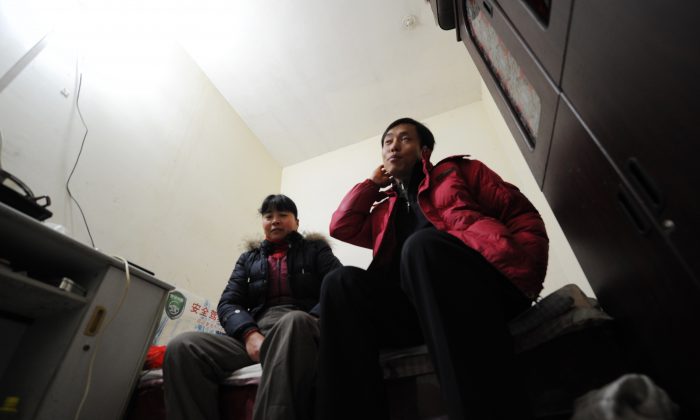 Chinese migrant workers sit in their tiny room, three stories down in a dimly lit air raid shelter in Beijing. These workers belong to what Beijing citizens are now referring to as the “rat tribe.” (Peter Parks/AFP/Getty Images)
Opinion

Disadvantaged groups in China have been dubbed a variety of names, such as the “ant tribe,” “cupboard tribe,” “well tribe,” and now “rat tribe.” A large number of people belong to these groups whose living conditions paint a clear picture of the sad and bitter life they are facing.

The names given these groups are taken from how they live. It is hard for people to imagine there are still people living under wells, inside shipping containers, or even inside air shelters and basements with no exposure to the sun.

According to definitions given on the Hudong Chinese encyclopedia website, “ant tribe” is a neologism used to describe a group of university graduates who settle for a poverty-level existence in the cities of China because they cannot find a job or have low-income jobs. They are like ants, intelligent yet weak, living in colonies.

“Cupboard tribe” has become a synonym for migrant workers in cities. They cannot even afford a simple room and have to live in shipping containers. Their harsh living conditions are a sad reminder of the helplessness they experience in their lives.

“Well tribe” originated from a news report about the discovery of a group of homeless people living for a long time in several wells near a five-star hotel in Beijing.

Recently, the new word “rat tribe” has surfaced. According to the French newspaper Le Figaro, the majority of the “rat tribe” people live in cellars or underground air raid shelters. These places do not receive any sunlight and are hot, humid, and fetid. Nobody pays attention to these “second-class citizens” who share a room with rats.

The tragic condition of these groups is caused by high housing costs and the effects of the household registration system.

In addition, city-dwellers have for a long time held certain prejudices about these groups. They believe those peasants chose to drop farm work and come to cities simply to seek wealth and out of a vanity not consistent with their own origins.

People also believe college graduates who are not from the cities continue to cling to first-tier cities merely to satisfy their craving for something out of reach. However, the reality is that these migrant workers have endured tremendous hardship and have done great work developing and building the cities. College graduates who see the bustling cities as their dream are replenishing the vitality and diversity of the cities.

The authorities have not only failed to provide these people who did so much to develop the cities with appropriate means for living, they have also abandoned them to the prejudices of society. They suffer from invisible pressure and inequality.

While limited housing resources might not be able to meet the housing needs of a sudden influx of migrants, China has many “ghost towns”—overdeveloped urban areas that have remained uninhabited for a long time. These empty buildings could be used to house the immigrants.

An open and transparent allocation of resources for settling immigrants would assure that these people would not have to live underground.

The authorities could at least gradually reduce the inequalities caused by geography and household registration. People making a difficult living would then no longer feel inferior because they had lost basic human rights and freedom. They would not have to hover around the edge of the cities because their identity and dignity had been disregarded and trampled.