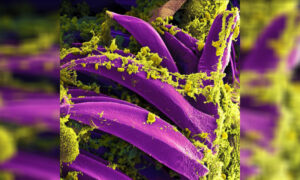 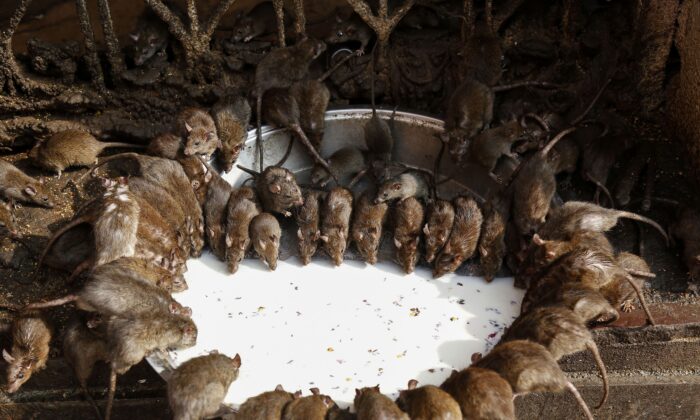 Rats drink from bowl of milk at a temple in Deshnoke near Bikaner, in the Indian state of Rajasthan on Dec. 24, 2018. (Himanshu Sharma/AFP via Getty Images)
China

Many Chinese people are now on high alert after a few locals in Inner Mongolia have reportedly contracted the plague and as the rat population in the region is said to be out of control.

According to official Chinese state media reports, at least four people have been diagnosed with the plague. The first patient, from northwest China’s Gansu Province, died in September from bubonic plague. A husband and wife from Inner Mongolia were diagnosed with the pneumonic plague and both are receiving treatment at a hospital in Beijing. The fourth patient, also from Inner Mongolia, contracted the bubonic plague after he consumed a wild hare on Nov. 5—he is also being treated in Beijing.

However, netizens suspect that Chinese authorities are covering up more cases of the plague even though they have reportedly taken precautionary measures to prevent the spread of the disease.

Bubonic plague is mainly spread by infected fleas from small animals and rodents such as rats, prairie dogs and hares. The three types of plague––bubonic plague, septicemic plague, and pneumonic plague––result through the route of infection. The plague, also known as the Black Death, claimed the lives of 50 million people in Europe during the 14th century.

The husband and wife patients contracted the plague in their hometown, Xilingol League of Inner Mongolia.

On Nov. 25, a local villager at Xilingol League told the Chinese-language Epoch Times, on the condition of anonymity, that there was a sudden increase in the rat population in Inner Mongolia this year. The rat invasion in Xilingol League started in August, while people in nearby areas began to notice them in June. He said the rats are seen running around everywhere.

Xilingol League is known for its well-preserved grasslands and Mongolian horse breeds. It borders Mongolia to the north and is roughly 340 miles north of Beijing.

“There are many rat holes in the grassland, and we often saw a couple of rats running around inside the house,” he said. “The authorities distributed rat poison to local residents, but I know it won’t work. There are just too many rats, running in groups of hundreds.”

Beijing’s Huabin Airlines, which specializes in disaster relief, announced on Nov. 20 on Twitter that the company dispatched four helicopters in the Xilingol grassland to administer rat poison.

A staff member from the local township government spoke to the Chinese-language Epoch Times on the condition of anonymity. He confirmed that the rat population has become uncontrollable. He said government employees use tractors to deliver rat poison to local herdsmen, together with booklets containing information on the prevention of the bubonic plague.

He also revealed that at railway stations, bus stations, entry and exit sites of major cities in the area, government staff would take passengers’ body temperatures. Some of the staff were seen wearing protective one-piece medical suits, making people feel that the situation is very serious.

According to the government staff, Xilingol League is currently in a state of “first-stage” alert about the plague. All residents have received warnings about the dangers of eating wild animals and staying away from prairie dogs.

The Chinese financial magazine Caixin reported on Nov. 22 that the Bubonic Plague Prevention and Control Emergency Response Leadership Group issued plans to prevent the plague from spreading to Beijing. Three lines of defense were proposed: 1) warning the public of the epidemic; 2) conducting physical exams [to be done by medical institutions]; and 3) conducting medical inspections at outbound check points.

Specifically, “body temperature checkpoints” have been set up in all main traffic arteries of Inner Mongolia. All people going in and out of the region are to be tested and must register their name, phone number, origin and destination of their trip.

Chinese authorities are known to have routinely blocked information of contagious epidemics, such as the SARS outbreak in 2003. A Beijing citizen who requested to remain anonymous told New Tang Dynasty TV, a sister publication of The Epoch Times, that his former classmate who works at Xuanwu Hospital—one of the top hospitals in Beijing—is forbidden to share information on plague cases.

“My classmate told me the hospital authorities have already issued an order that none of the hospital employees are allowed to tell any outsiders about the real situation of the plague,” the source said. “Actually there are six confirmed cases. Just like the SARS cover-up years ago, the authorities won’t allow the public to know [everything] about the plague outbreak,” the source added.