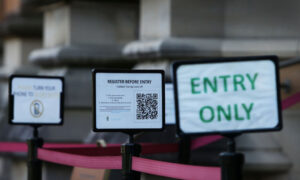 A rare Sumatran tiger, one of only 400 left in the world, is seen getting a rare health check while asleep in newly released video footage.

Jaya, a 10-year-old male, lives at the Perth Zoo in Australia.

He was put under with anesthetic for the check-up, during which veterinarians analyzed his eyes, ears, coat, teeth, and overall condition.

“Like most tigers, Jaya is a powerful carnivore, so there was no way we could do these checks while he was awake,” Perth Zoo vet Alisa Wallace said in a press release.

“We try to minimize the number of times we anesthetize our animals, but it has been four years since Jaya’s last vet visit, so we wanted to ensure we gathered as much information as we could to assess his health.”

The check-up commenced after six people lifted the large tiger from the vehicle that transported him from his living quarters at the zoo to the vet theater.

Jaya was born at the zoo in 2008. He is one of two Sumatran tigers who currently live there.

Less than 400 Sumatran tigers exist today; around 1,000 existed in 1978. Outside of zoos, the tiger is only found on Sumatra, an Indonesian island.

The Sumatran tiger is the smallest surviving tiger subspecies, according to the World Wildlife Fund.

“The last of Indonesia’s tigers are holding on for survival in the remaining patches of forests on the island of Sumatra. Accelerating deforestation and rampant poaching mean this noble creature could end up like its extinct Javan and Balinese relatives,” the group stated.

“In Indonesia, anyone caught hunting tigers could face jail time and steep fines. But despite increased efforts in tiger conservation—including strengthening law enforcement and antipoaching capacity—a substantial market remains in Sumatra and the rest of Asia for tiger parts and products. Sumatran tigers are losing their habitat and prey fast, and poaching shows no sign of decline.”

Three of the nine subspecies of tigers that once roamed the Earth are extinct, according to the Perth Zoo; the Javan, Bali, and Caspian tigers are all gone.

"The death of an already endangered female Sumatran tiger was another episode that seemed to confirm the lack of concern when it comes to the environment and natural wildlife habitats in Riau." https://t.co/i1D7dNVOYj

The zoo noted that unlike other cats, tigers like to swim; Sumatran tigers have partial webbing between their toes, which makes them very fast swimmers.

Tigers are carnivores and will eat whatever they can catch, including fish, crocodiles, and birds, though their most common prey is pigs and deer.