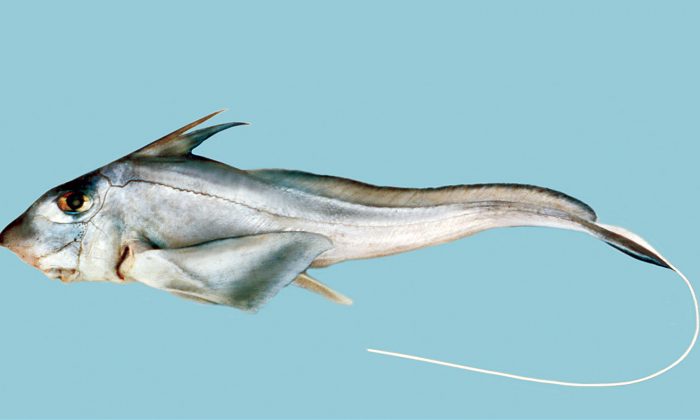 Who knows what hides beneath the waves?

A crew of deep-sea geologists who just happened to capture video of one of the planet’s rarest sharks has a pretty good clue.

A team of undersea geologists from Monterey Bay Aquarium Research Institute in California were using remote-operated vehicles (ROVs) some 6,700 feet below the surface off the coasts of California and Hawaii in 2009.

Though they weren’t looking for wildlife, they did recognize that the odd-looking meter-long fish swimming before their cameras was unusual.

Ebert recognized an extremely rare species in an entirely new habitat. The fish on the film was a pointy-nosed blue chimaera (Hydrolagus trolli), a species usually found near Australia and New Zealand, according to a recent study in the journal Marine Biodiversity Records.

Finding the new fish was pure luck. “The guys doing the video were actually geologists,” Ebert explained. “Normally, people probably wouldn’t have been looking around in this area, so it’s a little bit of dumb luck.”

Ghost sharks, or chimaeras, are related to other sharks and rays. They developed into their own species starting about 300 million years ago, scientists think. This means that ghost sharks were swimming along the bottom of the ocean while dinosaurs still walked the Earth—and they are still down there today.

Ghost sharks mostly feed along the ocean bottom. Most species prefer broad, sandy undersea plains. The video suggests that the pointy-nosed blue chimaera might differ, as it is seen cruising along rocky undersea outcroppings.

Unlike more popularized sharks, ghost sharks don’t have multiple rows of razor-sharp teeth. Instead, they grind their food—mollusks, worms, and other bottom dwellers—between sets of bony plates.

Ebert cannot be 100 percent sure that the fish on the video is a pointy-nosed blue chimaera. For that he would need a DNA study—and getting DNA from creatures living a mile underwater is as hard as one would imagine. Based just on the video, though, Marine Biodiversity Records accepted his article describing the new find.

There are at least three species of ghost sharks swimming in the world’s oceans, and most of them range widely. Therefore it is not too surprising to see a pointy-nosed blue chimaera in an different locale.

“I suspect many species are wide-ranging—we just don’t have the data,” explained Dominique Didier, a marine biologist and chimaera expert at Millersville University in Pennsylvania.

“The only way we can collect these species is by trawling,” she said. “So, it’s like a snapshot. Imagine trying to understand species distribution in Lake Michigan and you sample the lake using a Dixie cup. Trawling the ocean is like that.

Chimaeras—ratfish, or even “water bunnies”—which is what Hydrolagus roughly means in Greek—the fish “are just one of the many beautiful and poorly studied species that shares this planet with us,” Didier concluded.