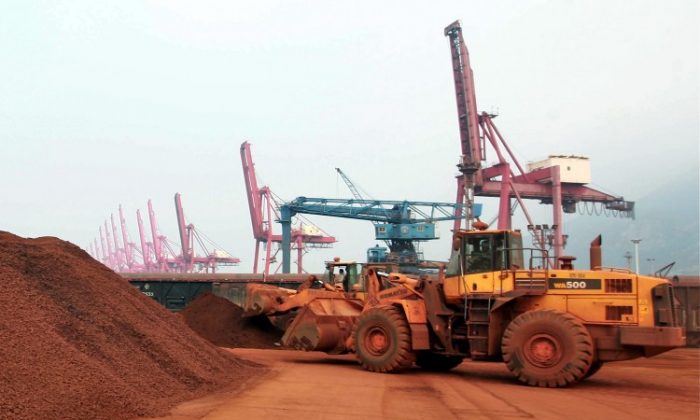 A front loader shifts soil containing rare earth minerals at a Chinese port for export to Japan in 2010. China has previously punished Japan with rare earth export embargoes, but that strategy may not be as viable now. (STR/AFP/Getty Images)
China

The recent Senkaku Islands conflict between Japan and China has led observers to wonder whether China will wage another rare earths war, given that the regime previously withheld exports as a means of economic reprisal over another territorial dispute with Japan in 2010. Japan, however, has taken great pains to open new sources of supply against such a contingency, and a similar attempt at economic sanctions by China may prove to be futile.

On Sept. 18, the 21st Century Business Herald quoted several rare earths exporters in China as saying that the Senkaku Islands dispute may cause China to terminate exports to Japan again.

However, the price of rare earths has fallen drastically in the past year. According to a report by Baichuan Zixun, the largest supplier of market information for raw materials, released on Sept. 29, the price index of China’s rare earths (BAIXT) is 2.81, compared to the last year’s high of nearly 12 points in November. BAIXT calculates the price change in rare earths according to market consumption of the 10 main rare earths products.

Reports by the China Securities Journal say that the fall in prices is due to a lack of demand resulting from the lagging economy as well as overcapacity in the rare earths industry.

The price of dysprosium oxide, a crucial element in engine motors, dropped to $477,000 a ton—a third of its original price—this September in Jiangxi Province, which is one of the main suppliers of rare earths, according to Japan’s Sankei Shimbun, citing the Chinese state-run Xinhua. Neodymium oxide, an element in the powerful magnets used in electric car engines, saw a 38 percent price drop in September as well.

Rare-earths market analysts for Baichuan Zixun believe that the low demand for neodymium magnets has caused many companies to halt production or decrease production.

According to statistics by the Shanxi Magnet Material Group, the national production capacity of neodymium iron boron, which makes the magnets, is 220,000–260,000 tons; however, the current production is only around 100,000 tons.

At the same time, international demand for China’s rare earths is decreasing as well.

The main foreign importers of China’s rare earths are Japan, the United States, and Europe. As a result of the European debt crisis, total exports of rare earths to Europe have decreased by 43 percent compared to last year.

Before 2009, Japan had imported over 90 percent of its rare earths from China, totaling up to 20,000 tons of rare earths oxidized material and alloys each year.

After a boat collision incident in September 2010 in the disputed Senkaku Islands, China stopped exporting rare earths to Japan for two months. Japan says that was the first time China imposed an economic sanction upon it since the installation of Sino-Japanese diplomacy.

Soon after, Japan altered its policies and began to seek new sources for rare earths in order to decrease dependency on China. In 2011, Japan imported 15,400 tons of rare earths from China, a 34 percent decrease from 2010.

According to the Nikon Keizai Shimbun, Japan imported 49.3 percent of its rare earths—a total of 3,007 tons—from China the first half of this year; this is the first time that imports from China have fallen below 50 percent of Japan’s rare earths import since 2000.

China Securities Journal reported on Sept. 27 that most of Japan’s new sources provide light rare earths such as cerium and neodymium, satisfying 60 to 80 percent of Japan’s demands for those materials. However, Japan is still dependent on China for 90 percent of its heavy rare earths.

The China Securities Journal report says that Japanese industries like Toyota have been developing mines in Canada with local industries, and are expecting to provide heavy rare earths, including dysprosium, to Japan by 2015.

Some mainland Chinese media reported views that China should limit exports to Japan in order to strike a blow to the Japanese economy.

But Feng Zhaokui, researcher for the Chinese Association for Japanese Studies, tells People’s Daily Online, a mouthpiece for the regime, that the rare earth issue is no longer a trump card that can be played against Japan.