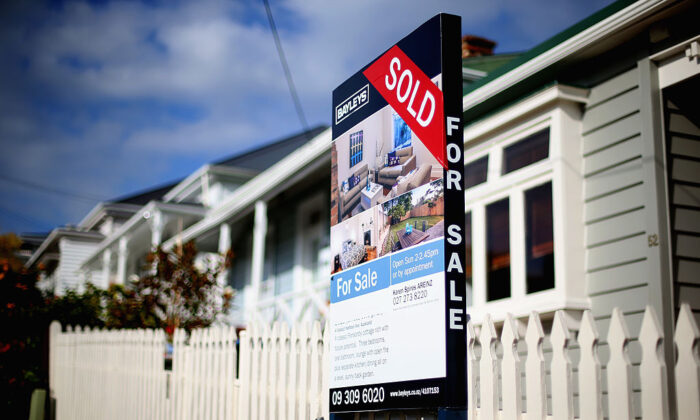 A real estate sign is pictured in Auckland, New Zealand, on May 16, 2013. (Phil Walter/Getty Images)
Australia

New Zealand (NZ) property prices have experienced their largest quarterly drop in over a decade as the market further weakens, shifting power to buyers.

The QV House Price Index reveals that the average home decreased in value by 0.6 percent over the three months to March.

This has brought down the average annual growth from 22.9 percent in February to 18.3 percent in March.

In Auckland, the average value in the three months to March saw an even steeper drop, falling 1.5 percent to $1.5 million (US$1.05 million).

QV General Manager David Nagel said the slowing growth and even contraction was particularly prevalent in the major centres where some of the largest value increases have occurred during the pandemic.

These major centres are also expected to experience a continued, gradual decline, while regional areas would likely continue to see stagnated growth over the next 12 months.

“We’re seeing quite a rapid decline in the rate of annual growth—especially compared to the early months of 2021, when the market was peaking,” he said.

Nagel said agents were reporting a bounce in sales volumes for March after a very slow start to the year, but levels were still significantly lower than previous years due to interest rate rises and lending restrictions.

“With the massive rise in listings over the past couple of months, the balance of power has shifted firmly into the hands of buyers, after such a prolonged period of it being a sellers’ market,” he said.

It’s index showed that national house price value growth has flattened at 0.7 percent in March, the lowest monthly change since the start of nationwide lockdowns in August 2020.

CoreLogic NZ Head of Research Nick Goodall echoed Nagel’s sentiment and noted that areas with the most significant upswing in values were also now at the greatest risk of vulnerability.

“Much of the concern for future vulnerability is for the equity position and ability for recent home buyers, and in particular first home buyers, to pay higher mortgage repayments,” he said.

The key reason for this was the increase in interest rates that could potentially have people looking at an extra $40 per fortnight for every $100,000 (US$69,000) in debt.

“While the market settings and backdrop for the downturn which followed the GFC (Global Financial Crisis) are very different to now, it is an interesting recent example of what can happen when credit is persistently constrained,” Goodall said.

The property market had fell 10 percent after the GFC and took five years for values to return to parity with the pre-GFC peak.

“So perhaps the risk is not so much for a large scale drop, but expectations should probably be tempered for how long it takes the market to stage a nominal recovery,” Goodall said.