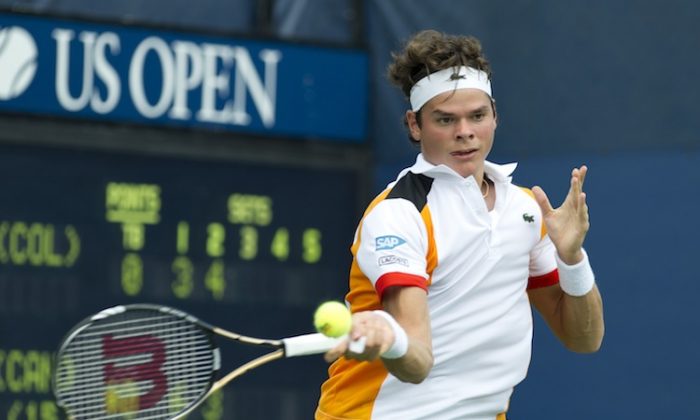 Milos Raonic needed five sets to get past Colombia’s Santiago Giraldo at the U.S. Open on Tuesday. (Don Emmert/AFP/GettyImages)
Sports

Raonic Struggles Through to US Open Second Round

The No. 15 seed, who could face No. 3 seed and Olympic gold medalist Andy Murray in the fourth round, reached the second round of the U.S. Open for the first time.

Despite serving 30 aces, Raonic’s serve was not at its best. The Thornhill, Ontario, native’s first-serve percentage was only 54 percent and he only won 48 percent of his second-serve points.

“I don’t think I’ve struggled with my serve that much,” Raonic said in his postmatch press conference on usopen.org.

“He [Giraldo] was returning well, but I gave him opportunities to return well. I had way too many lapses. He was holding easier than I was.

“It was hurting me today that I wasn’t serving well.”

Things weren’t looking good when Raonic was down two sets to one and a break in the fourth set, but he did show his fighting spirit that has taken him to the world No. 16 ranking.

Raonic has had a busy summer and has put forth good results. At the Olympics, he lost to France’s Jo-Wilfried Tsonga in a match that finished 25–23 in the third set.

He reached the quarterfinals of Cincinnati with two three-set wins over Marcos Baghdatis and Tomas Berdych.

Raonic is playing his best tennis of late and his ranking is as high as it’s ever been. But the lapses he spoke of are among other aspects of his game that he’s looking to improve.

“I need to improve at reading the game a bit better,” Raonic said.

On the tournament’s No. 1 seed and top-ranked player in the world, Roger Federer, Raonic said, “He’s one of the most enjoyable players to watch.

“Everything he does looks very athletic. It’s helped his longevity.”