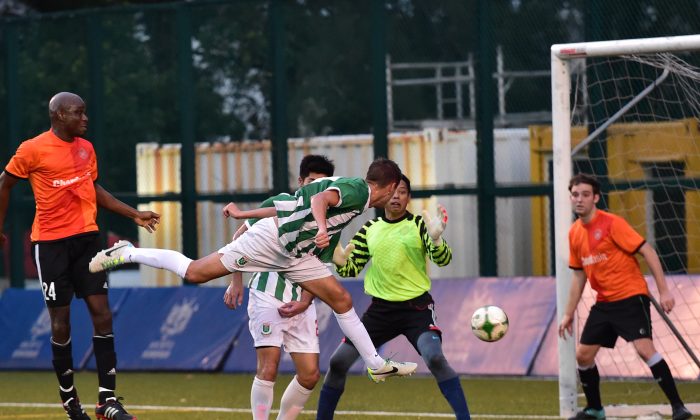 KCC Dragons’ No.11, Anthony Garreau makes a good, unchallenged downward header from a right corner kick to move his team into a 1-nil lead midway through the first half in their Yau Yee league, division-1 match against Corinthians at King’s Park on Sunday Sept 21. KCC went on to convert a penalty and win the match 2-0. (Bill Cox/Epoch Times)
Hong Kong

Rangers went into the lead in their game with Wo Foo Tai Po at Sham Shui Po Sports ground in the 4th minute when James Ha headed in after Yago Lopez’s pass hit the bar and dropped into the goalmouth.

Wo Foo Tai Po equalised in the 37th minute when Choi Kwok-waid headed in after Vincent Weijl’s corner was headed towards the goal, and resulted in the teams going into the half time break tied at 1-all. Rangers regained the lead in the 61st minute when Yago Lopez converted James Ha’s cross, whilst Wong Yiu-fu completed the scoring in the 95th minute to wrap up a 3-1 win for Rangers.

In the day’s other premier league match at Mongkok Stadium between Sun Pegasus and Wong Tai Sin, the game was settled in the 69th minute when Sun Pegasus striker Admir Rascic converted a cross from substitute Petrisor Voiner to start their campaign with a 1-nil victory.

In the game on Happy Valley pitch 6, Lucky Mile took the lead after 16 minutes when Martin Reiziger drove a 25 yard free kick into the top right hand corner of the net. Southern equalised after 23 minutes from a free kick awarded on the left side of the pitch which was driven at cross bar height to the far post where the centre forward headed the ball into the roof of the net.

The likely outcome of the game was impacted in the 40th minute when Lucky Mile’s Scott Hooper was given a second yellow card for a foul and sent off when the red card was shown. However, Lucky Mile held on until the half time break with the scores tied 1-all.

Lucky Mile regained the lead in the 50th minute when Reiziger converted his second dead ball kick of the game, and increased their lead in the 57th minute when a free kick into the penalty box was knocked down for Mark Vinod to score with a left foot strike.

Southern then mounted a series of attacks to try to get something out of the game, and
were rewarded in the 62nd minute when a loose ball was forced into the net.

Lucky Mile continued to withstand the pressure for an equalizer, but after the ball was worked down the Southern right wing in the 85th minute the final cross was driven into the box where it struck a hand and a penalty was awarded, and duly converted. As the game moved into added stoppage time a Southern defender struck a vicious drive from outside the left hand edge of the box which hit the underside of the bar and bounced down, before being cleared—the linesman immediately signalled that the ball had crossed the line, and the referee awarded the goal, leaving only time for the subsequent kick off before whistling for the end of the game and a 4-3 win for Southern.

Yau Yee League
In the early first division game at Sports Road on Sunday Sept 21, Albion defeated French Kiss 2-nil in a fairly drab game. A fairly uneventful first half with few chances created by either side, ended nil-nil. Albion broke the deadlock in the 54th minute when a long through ball was controlled on the left by Tom Taw who then breezed past the full back before entering the box where he swept a left foot shot past the advancing keeper. Albion settled the game after 72 minutes when a cross from the left was not cleared, and Tim Phillips headed over the goalkeeper (who was stranded in no man’s land) into the net.