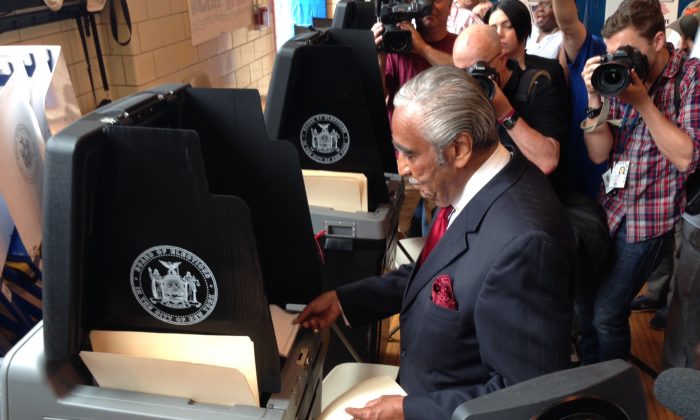 Rangel Votes for Himself, One Last Time

NEW YORK—Congressman Charles Rangel cast what said would be the last vote for himself at a polling station in Harlem on Tuesday morning.

“I told my wife of fifty years that it will be the last time I will be voting for myself,” Rangel said.

When asked if this would be his last campaign would be the last one. Rangel quipped: “Last what?”

“The most nostalgic thing about this vote today, and I shared this with my wife earlier, is that this will be the last time that I will be voting for myself for any office,” Rangel said.

Rangel said that the campaign has been a long and civil one, but failed to provide an example of civility when asked for one.

“I haven’t felt any animosity towards anybody in this campaign, nor anybody who supported any of my opponents,” Rangel said.

The congressman’s tilt toward civility could be meant to smooth out the comments that he made during a debate with State Sen. Adriano Espaillat, in which he asked what Espaillat has “done besides saying he’s a Dominican?”

Rangel’s his attire showed what couldn’t be hidden by campaign rhetoric and impeccable hairdos: a red tie stained from top to bottom, pants wrinkled around the groin, and black loafers which have not been shined.

The congressman said that he should have had “a little more passion for my wife, children, and grandchildren” than the passion he has for public service.

“Every time she complains I tell her: you knew who you were marrying, when you married me,” Rangel said.

“It’s been a great journey for both of us,” Rangel’s wife said. “This is the last one… I think.”