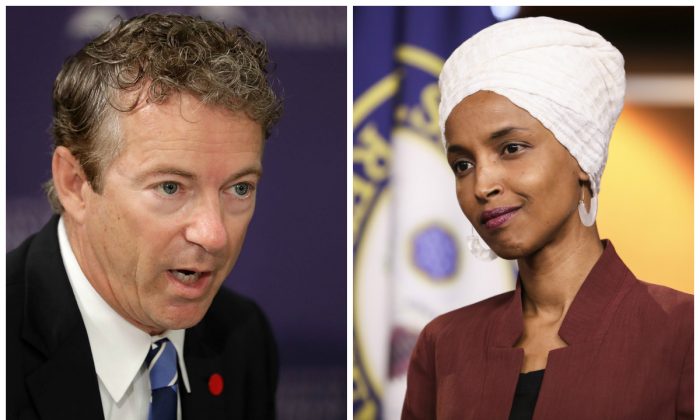 Sen. Rand Paul (R-Ky.) at the Center for the National Interest in Washington on Sept. 19, 2016, left. On right, Rep. Ilhan Omar (D-Minn.) speaks at a press conference on the Capitol on July 15, 2019. (Chip Somodevilla/Getty Images; Holly Kellum/NTD)
Politics

Sen. Rand Paul’s team have responded after Rep. Ilhan Omar shared a post celebrating the violence against Paul that left him with broken ribs.

Omar on July 29 shared a post by actor Tom Arnold celebrating the assault against Paul that occurred at his home in 2017.

“Imagine being Rand Paul’s next door neighbor and having to deal with @RandPaul lying cowardly circular whiney bullcrap about lawn clippings. No wonder he ripped his toupee off,” Arnold wrote.

Paul suffered multiple broken ribs after his neighbor tackled him from behind on Nov. 4, 2017. Rene Boucher, 59, was arrested and charged with assault. Paul later said he also had to undergo hernia surgery. A jury in January awarded Paul over $580,000 in damages.

Doug Stafford, a strategist for Paul, said that Omar showed with the promotion of the missive that she supports violence.

“It was nice of her to provide even more evidence that she is a person with vile, anti-American beliefs and values, who apparently also supports violence for political disagreements,” Stafford told the Gateway Pundit.

Sergio Gor, part of Paul’s team, said on Twitter of Omar retweeting Arnold: “Shameful behavior from one of the LEADING voices & faces of the dem party. Why is @IlhanMN retweeting this abhorrent tweet? We should never tolerate violence or promote it!”

Omar’s shared tweet remained up on July 30, some 24 hours after Arnold first tweeted it. Neither he nor Omar has apologized. While Omar hasn’t responded to the criticism, Arnold told a critic he supports a “rematch” between Paul and his attacker.

Shameful behavior from one of the LEADING voices & faces of the dem party. Why is @IlhanMN retweeting this abhorrent tweet? We should never tolerate violence or promote it! @IlhanMN @TomArnold pic.twitter.com/mDh3Lb9LsL

Omar’s promotion of Arnold’s celebration of violence came after Paul offered her money to travel to Somalia, where she was born.

He said that Omar was “ungrateful” for what America has given her.

“I’ve met people who have come here from behind the Iron Curtain. They got away from communism, they’re some of the best Americans we have, because they really appreciate how great our country is, and then I hear Representative Omar say America is a terrible place,” Paul, a known Trump ally, told Breitbart.

“Well, she came here and we fed her, we clothed her, she got welfare, she got [schooling], she got healthcare, and then, lo and behold, she has the honor of actually winning a seat in Congress, and she says we’re a terrible country? I think that’s about as ungrateful as you can get.”

.@RandPaul on @IlhanMN: “I’m willing to contribute to buy her a ticket to visit #Somalia… she can look and maybe learn a little bit about the disaster that is Somalia.” “After she’s visited Somalia she might come back and appreciate America more.” https://t.co/g4Hmw0J1HH pic.twitter.com/RKjSASWbne

Paul said that he would chip in for Omar’s plane ticket to Somalia.

“I think she can look and maybe learn a little bit about the disaster that is Somalia—that has no capitalism, has no God-given rights guaranteed in a constitution, and has about seven different tribes that have been fighting each other for the last 40 years,” he said.

“And then maybe after she’s visited Somalia for a while, she might come back and appreciate America more.”