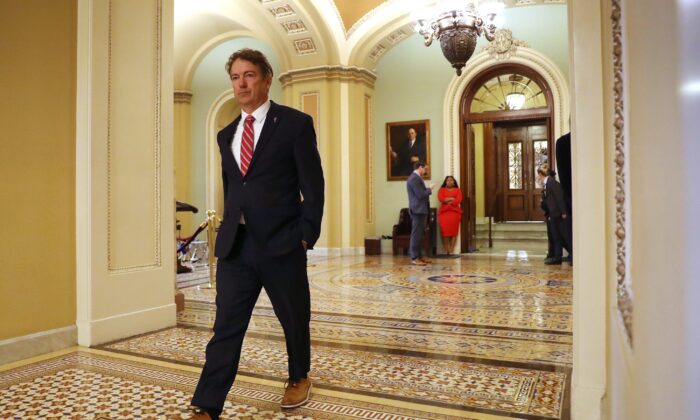 Sen. Rand Paul (R-Ky.) said he will force a vote on calling Hunter Biden to the witness stand in the Senate impeachment trial if his colleagues support Democrat calls for ex-National Security Adviser John Bolton to testify.

“My colleagues can’t have it both ways. Calling for some, while blocking others,” Paul said on Twitter.

He shared a Politico report that said Paul warned colleagues at a Republican lunch last week that they couldn’t vote for Bolton and not vote on witnesses that President Donald Trump wants.

Paul told fellow GOP members that conservative voters would be upset if lawmakers who could be unseated were undercutting Trump.

My colleagues can’t have it both ways. Calling for some, while blocking others. If we are going to give a platform to witnesses the Dems demand, I look forward to forcing votes to call Hunter Biden and many more! https://t.co/hrOzVyiG9x

“If we are going to give a platform to witnesses the Dems demand, I look forward to forcing votes to call Hunter Biden and many more!” Paul added on Twitter.

Biden was at the heart of Trump’s July phone call with Ukraine’s President Volodymyr Zelensky. Trump accused Biden and his father, former Vice President and current 2020 Democrat Joe Biden, of corruption related to Ukraine. Hunter Biden served on the board of the energy company Burisma from 2014 to 2019 and Joe Biden admitted last year that he pressured Ukraine’s leadership in 2016 to oust the prosecutor who was probing Burisma.

Senate Minority Leader Chuck Schumer (D-N.Y.) has repeatedly called on four Republican senators to vote with his 47 members to bring witnesses in during the trial. He wants Bolton, acting White House Chief of Staff Mick Mulvaney, Robert Blair, a senior adviser to Mulvaney, and Michael Duffey, associate director for national security at the Office of Management and Budget, to testify.

Some have wondered about Schumer pushing to vote on witnesses.

“I’m a bit baffled why Democrats are so enthusiastic about forcing witness votes to embarrass GOP senators,” former top McConnell aide Josh Holmes wrote on Twitter on Monday. “That seems like a terrific way to end up with Hunter Biden in the chair.”

Law professor Jonathan Turley, who testified during the impeachment inquiry, said that Biden “would be a relevant defense witness” in a conventional trial.

McConnell hasn’t ruled out witnesses but said he has the votes to start the trial without voting on the matter, citing precedent during the trial of President Bill Clinton.

“The 1999 precedent does not guarantee witnesses or foreclose witnesses,” McConnell said on the Senate floor last week.

Trump was impeached last month. The Senate was expected to receive the impeachment articles soon after but House Democrats withheld them for weeks. The caucus was meeting on Tuesday morning and would discuss sending the articles over, House Speaker Nancy Pelosi (D-Calif.) said.

Pelosi said over the weekend that holding the articles got a “positive result” but McConnell said Monday that it “achieved absolutely nothing.”