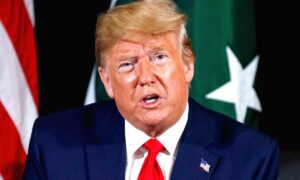 Trump on Troop Withdrawal From Syria: 'Time to Get out of These Ridiculous Endless Wars'
0
Share Now
TelegramFacebookTweetEmailTellMeWeReddit
Copy Link 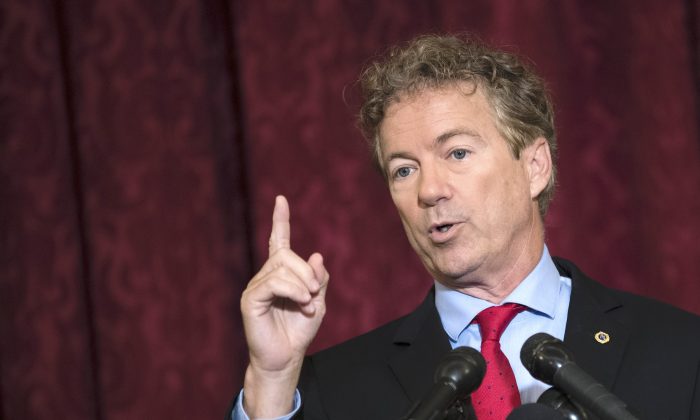 Sen. Rand Paul (R-Ky.) has defended the president’s move to withdraw troops from Syria despite a number of his colleagues having come out to express their opposition to the decision.

“I stand with @realDonaldTrump today as he once again fulfills his promises to stop our endless wars and have a true America First foreign policy,” Paul wrote on Twitter on Monday, Oct. 7.

“So many neocons want us to stay in wars all over the Middle East forever. @realDonaldTrump is absolutely right to end those wars and bring the troops home,” he wrote in a separate post hours later.

I stand with @realDonaldTrump today as he once again fulfills his promises to stop our endless wars and have a true America First foreign policy.

The Trump administration announced on Oct. 6 that they would pull troops out of northern Syria and hand over responsibility for captured ISIS “caliphate” members currently held in camps to Turkey.

“Turkey will soon be moving forward with its long-planned operation into northern Syria,” the White House announced in a statement. “The United States Armed Forces will not support or be involved in the operation, and United States forces, having defeated the ISIS territorial ‘Caliphate,’ will no longer be in the immediate area.”

Trump explained his decision to withdraw from the operation in a statement on Twitter on Oct. 7.

“The United States was supposed to be in Syria for 30 days, that was many years ago. We stayed and got deeper and deeper into battle with no aim in sight. When I arrived in Washington, ISIS was running rampant in the area. We quickly defeated 100% of the ISIS Caliphate including capturing thousands of ISIS fighters, mostly from Europe,” Trump wrote on Twitter.

The commander-in-chief pushed back at Europe’s suggestion that the United States should take responsibility for the captured fighters.

“Europe did not want them back, they said you keep them USA! I said ‘NO, we did you a great favor and now you want us to hold them in U.S. prisons at tremendous cost. They are yours for trials.’ They again said ‘NO,’ thinking, as usual, that the U.S. is always the ‘sucker,’ on NATO, on Trade, on everything,” Trump wrote.

He continued, “I held off this fight for almost 3 years, but it is time for us to get out of these ridiculous Endless Wars, many of them tribal, and bring our soldiers home. WE WILL FIGHT WHERE IT IS TO OUR BENEFIT, AND ONLY FIGHT TO WIN.”

“Turkey, Europe, Syria, Iran, Iraq, Russia and the Kurds will now have to figure the situation out, and what they want to do with the captured ISIS fighters in their ‘neighborhood.’ They all hate ISIS, have been enemies for years. We are 7000 miles away and will crush ISIS again if they come anywhere near us!”

Trump’s decision garnered bipartisan backlash from many lawmakers, including those who are usually vocal about their support for the president like Senate Judiciary Committee Chairman Lindsey Graham (R-S.C.).

“This is going to lead to ISIS’ reemergence. Nothing better for ISIS than to create a conflict between the Kurds and Turkey,” Graham told Fox News. “The Kurds will now align with [Syrian dictator Bashar Hashad al]-Assad because they have nobody to count on because we abandoned them.”

During a phone interview with Fox News later on Monday, Paul explained the reasons for his support over the president’s decision on Syria.

“I would say this I think President Trump recognizes what President Reagan recognized unfortunately too late in Beirut, leaving three to four hundred people in an area that is vulnerable could lead to catastrophe but also doesn’t really do anything to secure our national security,” Paul said.

He said in order to achieve peace in Syria, locals will need to take charge as they have more stake in the conflict.

“I think that the best answer is that we don’t have all the answers. The people who live there will have more of a stake in the game and we need to not think that it’s always the U.S.’s responsibility to fight every war and find every peace,” he said.