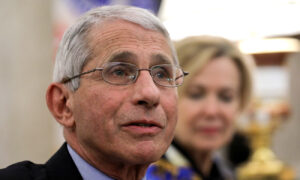 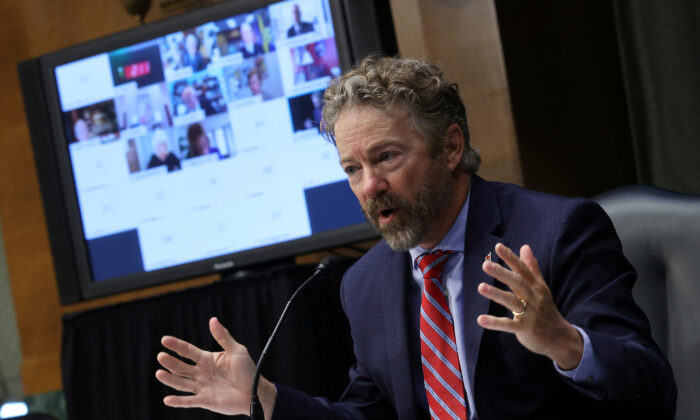 Sen. Rand Paul (R-Ky.) participates in the Senate Committee for Health, Education, Labor, and Pensions hearing on the COVID-19 response, in Washington on May 12, 2020. (Win McNamee/Reuters)
Politics

Dr. Anthony Fauci, a member of the White House Coronavirus Task Force, clashed with a senator on Tuesday about when to reopen schools in America, acknowledging he did not have the final word on pandemic-related decisions but warning against being “cavalier” about the danger to children.

Sen. Rand Paul (R-Ky.) told the Senate Health, Education, Labor, and Pensions committee that some predictions put forward by experts as to the path of the pandemic are likely to be proven wrong, and challenged the wisdom of extending school closures.

“We can listen to your advice, but there are people on the other side that are saying ‘There’s not going to be a surge and we can safely open the economy.’ The facts will bear this out,” Paul said during Fauci’s testimony to the Senate committee.

“If we keep kids out of school for another year, what’s going to happen is the poor and underprivileged kids who don’t have a parent that’s able to teach them at home are not going to learn for a full year,” he said, adding that he believed it would be a “huge mistake if we don’t open the schools in the fall.”

Fauci replied, “I have never made myself out to be the end-all, or the only voice in this.”

Fauci then cautioned against jumping to conclusions about a virus with respect to which the scientific community still has blind spots.

“We don’t know everything about this virus,” Fauci said. “And we’d really better be very careful, particularly when it comes to children.”

“I think we’d better be careful that we are not cavalier in thinking that children are completely immune to the deleterious effects,” Fauci said.

Fauci referred to a rare inflammatory syndrome believed to be linked to COVID-19, which has killed at least three children in New York and afflicted dozens of others. The syndrome shares symptoms with toxic shock and Kawasaki disease, which can cause inflammation of arteries of the heart.

“You’re right in the numbers that children, in general, do much, much better than adults and the elderly and particularly those with underlying conditions,” Fauci said, adding, “But I’m very careful—and hopefully humble—I don’t know everything about this disease and that’s why I’m reserved in making broad predictions.”

Paul also questioned the accuracy of models predicting the pandemic’s path, citing the example of Sweden.

Per capita deaths due to the virus have been higher in Sweden than in neighboring Denmark, Norway, and Finland, which have stringent restrictions. Yet Sweden’s COVID-19 counts have been lower than in Britain, France, and Spain, which have all imposed severe lockdowns.

“We need to observe with an open mind what went on in Sweden where the kids kept going to school,” Paul said, referring to the Nordic country’s softer approach to the outbreak, which was to protect the vulnerable and isolate the sick, and advise people to social distance, rather than shut down the economy.

“I don’t think there’s anybody arguing that what happened in Sweden is an unacceptable result. People are intrigued by it, and we should be,” Paul said.

While acknowledging the deadly nature of the virus, Paul pointed to low infection and fatality rates in many parts of the United States and urged a less centralized approach to lifting lockdowns that should take into account the specifics of each school district.

“Outside of New England, we’ve had a relatively benign course for this virus nationwide. And I think the one-size-fits-all, that we’re going to have a national strategy, that nobody is going to go to school is kind of ridiculous,” he said.

As discussions continue about when it is safe to reopen schools in the face of the pandemic, several studies suggest children are not only less susceptible to COVID-19 infections but may also be far from the silent “super-spreaders” some fear they may be.

Icelandic scientist Kári Stefánsson, who studied the spread of COVID-19 in his country, told Science Museum Group in an interview in April that his research revealed not a single case of a child in Iceland infecting his or her parents.

If the Icelandic conclusions are sound, it would suggest that children may not be at high risk of infection from exposure to one other. The conclusions also imply that teachers may similarly be less likely to catch the virus from their students.