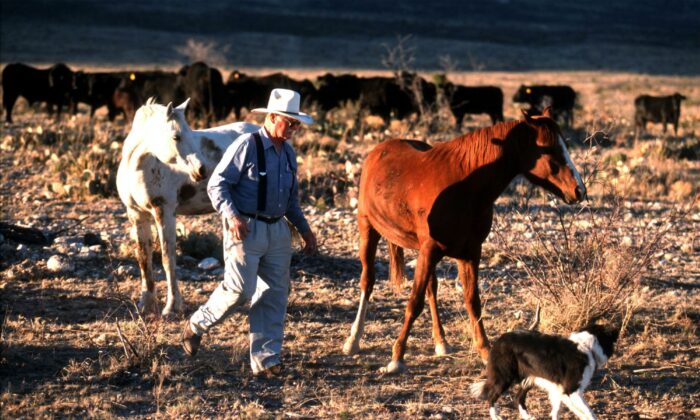 A rancher walks through his ranch near Carlsbad, N.M. on March 21, 2000. (Joe Raedle/Getty Images)
By Matthew Vadum

New Mexico ranchers are suing the U.S. Environmental Protection Agency (EPA) over its new Navigable Waters Protection Rule, which they say violates property rights even though it’s an improvement over the previous rule.

The move comes after the Supreme Court gave the EPA new power to regulate pollution that travels to navigable waters through groundwater, as The Epoch Times previously reported.

The Clean Water Act (CWA) gives the government authority to regulate interstate commerce by prohibiting discharges into the nation’s “navigable waters,” forbidding “any addition” of pollutants from “any point source” to such waters without a permit. The court found April 23 that a permit was required for discharges from a point source into navigable waters or whenever there is the “functional equivalent” of one.

Property owners have long resented what they characterize as EPA’s excessive prosecutorial zeal as it, along with the U.S. Army Corps of Engineers, have treated mere puddles on private land as “navigable waters.”

In July 2019, a federal appeals court posthumously vacated the conviction of Joseph D. Robertson, who languished in prison for more than a year for digging fire protection ponds near his Montana home without permits. The EPA declared the ponds protected waterways even as the nearest navigable waterway was 40 miles away, The Epoch Times previously reported.

Robertson’s lawyer, Tony Francois, senior attorney at the Sacramento, California-based Pacific Legal Foundation (PLF), said that over the years, “EPA has changed the definition of ‘navigable waters’ to increase its regulatory authority at the expense of property owners’ rights.”

The new rule may be better than the old but “its regulations are still unconstitutionally broad,” he said. “Specifically, the new rules let federal agencies control ponds, wetlands, and other property far removed from navigable waterways. These were never intended by Congress to be covered by the Clean Water Act.

“The Justice Department has already said that the new rule is unlikely to help people like Jack LaPant, a California farmer who is being prosecuted for growing wheat more than a decade ago,” Francois said. “If he can be sued for normal farming and face millions of dollars in damages, then no one is safe.”

LaPant is being defended by PLF in a separate proceeding.

Francois said that his client, the New Mexico Cattle Growers’ Association, filed a supplemental complaint in its ongoing legal challenge to the waterways rule. The April 27 filing was needed to reflect the fact that on April 21, the EPA and the Army adopted a new version of the rule.

The new rule represents “a significant change,” Francois told The Epoch Times in an interview.

“It’s a pretty bold move by the administration and you have to give them a lot of credit for doing it.”

“Think of it as like a slider that goes from left to right with the right edge of it being, the act regulates actual lakes and rivers that boats navigate on and the oceans, and all the way to the left end, anything wet anywhere. And for … decades the regulations have pushed that slider … pretty close to all the way to the left. So this one moves it about halfway back to the right end.”

The New York-based Natural Resources Defense Council and allied groups filed a lawsuit April 29 in federal court in Massachusetts, claiming the new rule was “a significant and unprecedented rollback” of CWA protections because it excludes waters “critically important to downstream water quality.”

From Francois’s perspective, that so-called rollback is what “actually is required.”

“The former practice of regulating waterways at a distance from other water bodies was illegal,” he said.

Now, at least the EPA acknowledges lacking authority to regulate ephemeral water bodies, which can mean ponds or shallow depressions in the ground that only contain water because of precipitation, he said.

The revised rule still lets the government “continue to regulate intermittent tributaries no matter how small they are … no matter how little water actually flows in them and no matter how far they are from anything that is actually navigable, no matter how brief the duration of the flow … so you could actually have a couple of garden hoses of flow over the space of a week, and the EPA and the Army are going to say, ‘Yeah, we’re continuing to regulate that.’”

The rule also continues regulating wetlands that directly abut regulated rivers or lakes, a practice that Francois said his client doesn’t oppose. But the cattle ranchers are challenging the continued regulation of wetlands that are separated by a barrier, he said.

Francois said he will seek an injunction against the objectionable provisions, which make it “cost-prohibitive to use your own land.”

Erica Zilioli, counsel of record for the EPA in the cattle growers’ lawsuit, didn’t immediately respond to requests by The Epoch Times for comment.