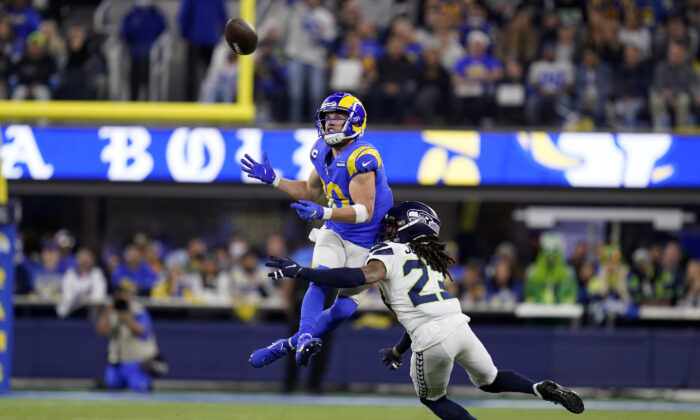 Following a first half of defense-dominated football, the Los Angeles Rams defeated the Seattle Seahawks as Matthew Stafford connected with Cooper Kupp for two touchdowns in a 20–10 victory Tuesday night in Inglewood, Calif.

The Rams won their third straight, improving their record to 10–4; which ties the Arizona Arizona Cardinals for first place in the NFC West.

The Seahawks snapped a two-game winning streak, dropping them to 5–9 and significantly lowering their chances for a wild-card playoff berth. This season will be Russell Wilson’s first losing season in his 10-year career.

The Rams scored a field goal on their opening drive, and the Seahawks tied the game 3–3 on the final play of the first half.

Rams kicker Matt Gay is statistically the best kicker in the NFL. He made the opening 55-yard field goal after Seattle’s Alton Robinson was penalized for running into Rams punter Johnny Hekker; which moved the ball five yards closer for the field goal attempt.

The Seahawks took the lead on their opening drive of the second half, with DeeJay Dallas scoring on a 4-yard run to make it 10–3.

In the third quarter, Kupp broke Isaac Bruce’s single-season Rams’ receptions record of 120, with a six-yard touchdown catch that tied the game 10–10.

The Rams took a 17–10 lead with 10:48 remaining in the game with Kupp’s 29-yard touchdown catch that finished off an 88-yard drive. Kupp broke a league record, being the first to have 90 plus yards receiving in 10 consecutive games.

“Coming off a very big game against the Cardinals and then having all the (protocol) stuff go on … it’s just being able to navigate the changes in your routine and still put together a game plan, and execute when you don’t even know who’s going to play,” said Kupp. “I just thought we did a good job handling that and walking out with a ‘W.’”

“He’s a great player, (and) he’s having a fantastic season,” Stafford said. “He’s such a huge part of what we do as a team, not only on offense. I’m just happy that I get a chance to play with a guy like that. I know a lot of other guys on our team feel the same way. We’re just proud of him, watching him do his thing.”

Rams kicker Matt Gay added his second field goal, of 35-yards, to finish the scoring at 20–10 with 1:51 remaining; and Taylor Rapp ended the Seahawks final drive clinching the win with an interception in the end zone.

For the Seahawks, Wilson completed 17 of 31 for 156 yards and a late interception.

Carlos Dunlap led the Seahawks’ defense with three of their four sacks, but the defense was unable to contain Kupp in the second half.

“There were some opportunities in there that we needed to go the other way, and they didn’t for one reason or another,” said Seahawks coach Pete Carroll. “We felt like we kind of kept them under wraps, but we needed to score again and get ahead.”

From league protocols for the past week, the Rams were without leading tackler Jordan Fuller, right tackle Rob Havenstein, tight end Tyler Higbee, and many backups. The Seahawks were without top rusher Alex Collins, leading receiver Tyler Lockett, and starting cornerback D.J. Reed.

The game was moved back to Tuesday since nearly half of the Rams had failed the league’s COVID-19 protocols.

“Up until this morning, you really don’t know if you’re getting some key players (back),” said Sean McVay. “I didn’t even know if we had enough guys to be able to field a team.”

“I got cleared out the COVID list today”, said pro-bowler Von Miller. “I’m feeling pretty good, never played in a game then took the whole week off, and play another game. So that was the first, but 11 years in the league there’s not too much that I haven’t seen.”

Since the season-ending injury to the Rams’ second-leading receiver Robert Woods, rookie Ben Skowronek and Odell Beckham Jr. have filled the void. Skowronek made the second most receptions with four for 42 yards.

“It’s just the next man up mentality,” said Skowronek. “Coming in here this year the receiver room is deep, but I knew I’d have my opportunity at some point this year. Just trying to make the most of it … and help this team win football games. “It’s just such a blessing to be able to be under (Kupp’s) wings … he’s taught me how to be a pro.“

“Adversity builds character” added Skowronek. “Every single team throughout this league is going to go through a rough patch in the season, and it’s just how you respond. “We take it one day at a time, one game at a time. “We don’t look too far ahead, and we’re just focused in the present moment.”

Their game concludes week 15, the Rams go to Minnesota on Sunday; while the Seahawks host Chicago on Sunday.