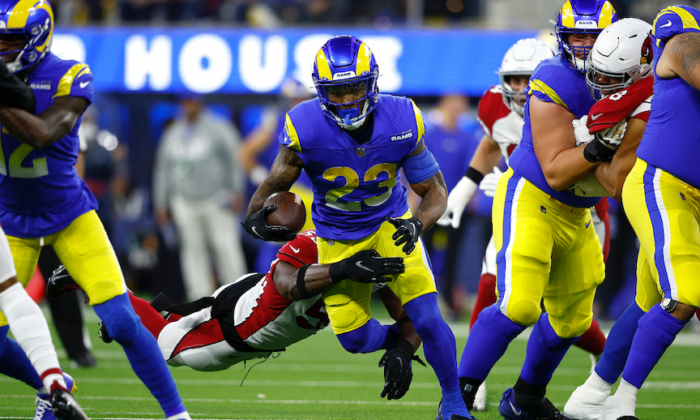 Cam Akers #23 of the Los Angeles Rams runs with the ball in the first quarter of the game against the Arizona Cardinals in the NFC Wild Card Playoff game at SoFi Stadium in Inglewood, Calif., on Jan. 17, 2022. (Harry How/Getty Images)
NFL

The Los Angeles Rams dominated the Arizona Cardinals in every aspect of the game to win 34–11 in their NFC Wildcard match-up at home; in front of a sold-out, loud, and pleased crowd. It was the first Monday Night Football playoff game.

“What a great job really by our team,” said Rams coach Sean McVay. “I thought our guys were ready to go; defense was outstanding from the jump. Von made his presence felt right away, making a couple sacks. I thought David Long’s touchdown to be able to put us up 21–nothing was was huge for us. I think it was one of the best performances in playoff history in the first (half), Being able to hold a really explosive offense like that; to be able to get a defensive touchdown, a couple turnovers.”

Rams quarterback Matt Stafford threw for 202 yards proficiently on 13 of 17 attempts, with two touchdowns, no interceptions, and sacked once. He scored the Rams’ second touchdown on a one-yard quarterback keeper at the beginning of the second quarter for a 14–0 advantage. Having moved to Los Angeles, Stafford came short of tying the record, by one season, having played 13 seasons with Detroit without a playoff win.

Stafford credited the victory stating “what a team win … our defense played outstanding. Our special teams had huge plays and set up our defense for scores. Our offense did enough to put enough points on the board to win it. Just proud to be a part of this team. Happy to get one looking for more.”

As usual, Cooper Kupp led the Rams in receptions, with five for 61 yards, and a touchdown. Coming into the game, Kupp led the NFL with 848 yards after the catch, which is 78 yards more than any other player. Kupp is second in NFL history with 1,947 total yards receiving in a season, behind Calvin Johnson’s 1,964 yards in 2012. He will likely break the record in next week’s playoff game. Both receivers had Stafford as their quarterback.

Kupp served as an excellent decoy as the Cardinals double-teamed him frequently, opening up other receivers, especially Odell Beckham.

Beckham had four catches for 54 yards and a touchdown; scoring the first TD on a four-yard out pattern to the back-left corner of the end zone on a well-placed pass from Stafford. He also completed a pass that went for 40 yards to running back Cam Akers on a “flea-flicker” that led to Kupp’s touchdown in the opening of the third quarter to lead 28–0. Beckham is 5 of 7 in passing completions in his career.

Since moving to the Rams, Beckham has scored six touchdowns in nine games, targeted 10 times in the “red zone,” and had no drops; while having no TD’s, three RZ targets, and two drops while with the Cleveland Browns for the first six games of the season.

Five Rams receivers totaled 242 yards including Tyler Higbee with 46, Van Jefferson with 41, and Akers with a 40-yard catch. The Rams rushed for a total of 140 yards; with Sony Michel leading with 58 yards on 13 carries. Akers had 17 carries for 55 yards and Stafford had six runs for 22 yards.

The Rams defense held the Cardinals to five consecutive three downs and out to start the game. They have tied the 2012 Bengals and the 2018 Colts for having the worst third-down offense in playoff history with no third downs in nine attempts.

Cardinals quarterback Kyler Murray had a dismal performance with 19 of 34 completions for 137 yards, no touchdowns, two interceptions, and two sacks.

The first interception came in the second quarter, at the 7:59 mark when Murray tried to avoid a safety as he was being sacked by Anthony Hines, attempted a side-arm throw that was intercepted by David Long for a “pick-six;” the shortest pick-six in NFL history.

Arizona finally got its first first down on the following drive and reached their 48-yard line when Murray threw his second interception to Marquise Copeland. The ball came off of the hands of running back James Conner.

The Cardinals were only able to rush for 61 yards total; led by Chase Edmonds with 28 yards and Conner with 19. They passed for a total of 137 yards; led by Christian Kirk with 51 receiving yards.

Arizona finally scored a touchdown with 4:11 remaining in the third quarter following the Kupp score. They marched 75 yards on 12 plays, culminating in a Conner two-yard rushing TD; and would complete a pass to score a two-point conversion to trail 31–8.

Both teams would add field goals to close out the scoring at 34–11. Rams Matt Gay was successful on both field-goal attempts, with the longest of 46 yards. Cardinals kicker Matt Prater scored their solo attempt of 55 yards.

In retrospect of the lack of success, Cardinals coach Kliff Kingsbury said, “I’m not sure. that’s what we got to figure out. “That’s what those guys are talking about in the locker room.” (We’ve) “got to use it as motivation and come back stronger from it. Because that’s not indicative of who we want to be, and unfortunately, that showed up tonight.”

The Rams face Tom Brady and the defending Champions Buccaneers on Sunday at 3 p.m. EST.